I blink, and it’s suddenly been over a month since I did a pregnancy update. 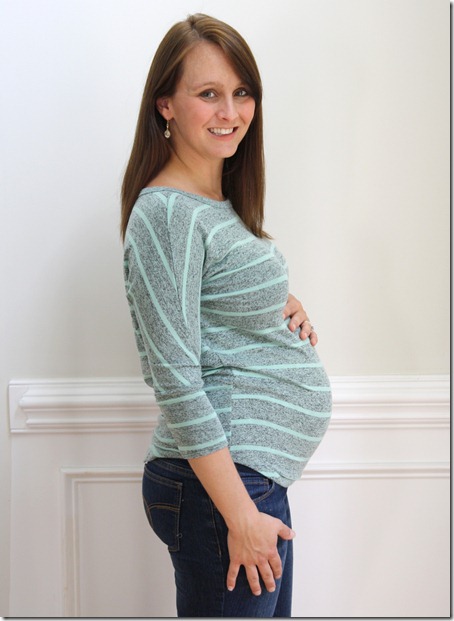 I think my lack of updates is mostly due to the only things I can think to say are:  I am pregnant.  I am getting bigger and bigger.  The number of weeks I have left are getting smaller and smaller.  I am alternating between total peace and freaking the eff out.  Hah. 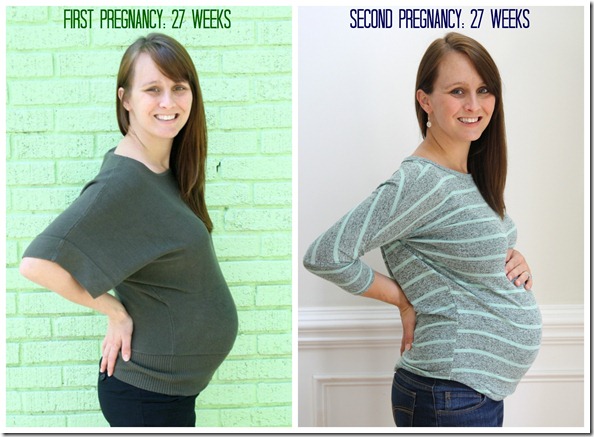 I’m just kidding – I actually feel much more wordy than that.  It’s just that time feels super accelerated this pregnancy.  The days slip by so quickly – I feel like it will be December 1 before I know it.

How am I feeling?  Well – bigger and bigger.  The scale at the doctor’s said I’m up about 29 pounds, which is 8 more than I was with Henry at this stage.  I don’t know how that happened (well, I guess I do…).  My doctor and midwife don’t seem concerned about it, so I’m not, either.  But I do have to say that the faster gain makes me feel way more pregnant than I actually am.  Clothes I expected to still fit don’t.  I broke a bra the other day (true story).  Carrying Henry up the stairs feels like I’m scaling a mountain (I seriously LOLed when I read a recommendation that pregnant women stop carrying heavy objects – I have a toddler!).  The bump is tight and firm, and my back aches all the time.  Basically – I feel like I’m in every single inch of the third trimester.  Which I guess I am officially in now!  WAHOO!

Per the usual, I’m going to do the rest of the update in bullet point format because I have so many random things to touch on!

This time last round, I wrote about encapsulating my placenta.  I’m still planning on doing it this time – I just booked my appointment!  I’m sure half of the people reading this think it’s totally gross, but I’m super excited to see this baby’s placenta and compare it to Henry’s.  That’s weird, isn’t it?  Hah.

Henry starts ‘preschool’ tomorrow.  I am so excited.  I am so nervous.  This is a huge step in preparing our family for the addition of Number Two, so I hope it goes well.  Fingers crossed.

Henry is out of the nursery and into his big kid room.  I’ve slowly started to call the nursery “the new baby’s room.”  Henry seems cool with it.  He definitely understands that there’s a baby in my belly, but we’ve been talking about it for so long that he probably thinks the kiddo is never going to actually come out.

Boy or Girl Predictions – Henry only refers to the bump as “Baby Sister,” which I think is interesting considering I always say “baby brother OR baby sister.”  Everyone else thinks it’s a girl, too.  I still have no idea.  If I lean in any direction, I think it’s another boy.

Names – We officially had names picked back in June, but I continue to waffle on the boy’s name.  Boy names are SO FREAKING HARD.  We have one traditional boy name and one slightly less traditional name.  I’m a pretty traditional namer so the untraditional one feels slightly strange to me, even though I really like it.  We shall see!

I’ve began to make a list of things we need to buy.  My list so far includes:  a babywearing carrier (any thoughts? I want something that can be forward and rear facing); another infant car seat base (we only had one car last time); swaddles (again, recommendations? I didn’t really swaddle with Henry but I plan to this time around); newborn winter clothes; and other odds and ends.  A friend offered to loan me a bassinet – wahoo!

Still working out – kind of.  I try to move every day, but it’s been 5 out of 7 days lately and it’s getting slower and slower.  I either walk, walk/run, or do some cardio at the gym.  I was really into yoga a few weeks back, but I kind of hit the wall with the non-prenatal classes – they were simply getting too hard.  I’m making it a goal to swim more!

Speaking of this – I’m really looking forward to trying PiYo workouts after the baby arrives and I recover.  PiYo is my grand plan for fitness with a newborn in the winter.  And then I wanna do a triathlon!  I missed tris so much this summer.

I feel like I’ve forgotten everything about what I did in the last trimester with Henry (like, I have all these ‘new’ questions about Primose Oil, Raspberry Leaf Tea, kegels, how I’m supposed to be sitting on the couch).  I wish we could’ve re-done the Bradley Method classes – it’s really nice to discuss childbirth with a professional guide every week.  I kind of feel like I’m at a loss right now.  Advice from other mommas who have been there, done that with these types of things?  I think the Raspberry Leaf Tea really helped me.

I’ve recently realized that the #1 lesson of parenting that I learned over the last two years is:  NOTHING LASTS FOREVER.  In good ways and bad.  We’re pretty sure that we’re done after two kids, so we’ve been talking a lot about how we’ll try extra hard to cherish the sweet newborn moments with this baby.  And I think this is going to make the sleepless nights easier, too – just knowing that it won’t go on forever.  With Henry, I remember thinking at 6 weeks that I was NEVER GOING TO SLEEP AGAIN.  That the newborn phase would NEVER END.  But you know what? It does… and then you kind of miss it (or a least parts of it!). 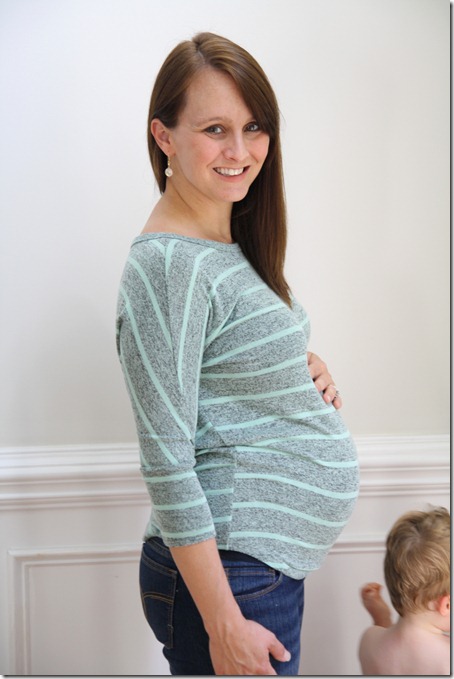 Your turn!  If you’re pregnant or just had a baby, give me an update (I love hearing your news!)