All the Baby Details

Your announcement post was fun!  Are those gluten-free cinnamon buns? I want the recipe!  They look AMAZING!

I’ll admit it… the cinnamon buns were just a prop.  Not even homemade.  The thought of slaving over the stove to make cinnamon buns was not appealing, so I bought a tube of regular Trader Joe’s cinnamon buns.  Nicole came over and shot the post for the Husband and I, and then she ate my baby.  Hah! 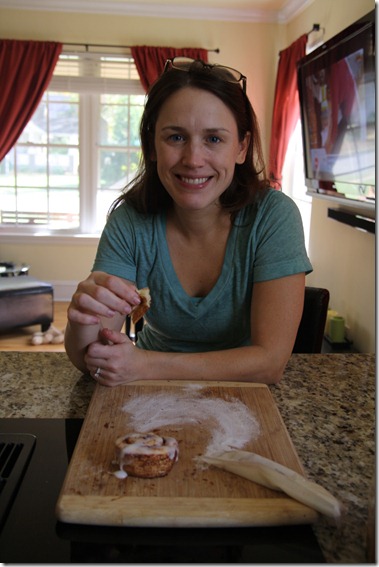 Yup!  There are hidden messages!  The hidden clues include:  ultrasound pictures on the fridge, What to Expect When You’re Expecting on the countertop, my (wishful) bump in one of the shots, one missing egg from the carton, I’m holding the eggs and the Husband is mixing the icing (too much? Ha!), and our wedding rings are shown in the ‘going in the oven’ shot.  Clearly, I planned this post for weeeeks and had lots of time to be all coy and creative.

So, how far along are you?  And when is your due date?

I’m 9 weeks this Wednesday, and BabyHTP is due on June 13.  But I hope the baby is a few days late and is born on Father’s Day!

It blows my mind that there is already a heartbeat. Mind = Blown.

9 weeks?  Isn’t it too early to tell everyone?

Traditionally, most couples wait until the end of the first trimester, after which the risk of miscarriage drops significantly.  We still have a couple of weeks to go until that point… but we mutually decided to reveal now because we heard the heartbeat on Friday, and our doctor said this makes our chance of miscarrying significantly lower than before (although, of course, it could still happen).

Miscarrying is, unfortunately, incredibly common – one in four women will miscarry at some point.  I can completely understand why some women don’t want to tell too soon because then they’d also have to tell everyone they miscarried.  But, based on what other women have told me, another reason some women ‘hide’ pregnancy and miscarriage is because our society often makes them feel ashamed – like they did something wrong.  I really respect movements like I Am The Face (as well as bloggers like Brie Fit and Life in a Holding Pattern, among others) because it brings awareness to the issue and, hopefully, makes more women realize that it’s not their fault.  Thus, part of the reason why I feel comfortable talking about my pregnancy now is that I would probably blog about my experience if I miscarried. I really believe women shouldn’t feel like they have to stay quiet about it – unless they want to, of course.

And lastly, it’s become increasingly difficult to hide the pregnancy on the blog.  People have been asking me, “Why didn’t you run that half marathon? Are you a total flake?” or “You seem to be tired a lot – could you be depressed?”  It’s so hard to hide something like this for long when you blog about your daily life.  People began to suspect and email, tweet, or comment with questions.  I hated deceiving everyone, so once we heard the heartbeat, we figured – why not now?  I know this isn’t the choice that everyone would make, and I totally respect that, but we’re both comfortable with going public now.

How did you find out, and how did you tell the Husband?

Amazingly, I tested positive nearly a week before my missed period.  I used strip tests from SaveOnTests.com; I had a pack of 30 for $10, which meant I could test to my crazy heart’s content.  Six days before my period, I POASed (peed on a stick), thought it was negative because a line didn’t immediately appear, and tossed it in the trash.  Then, ten minutes later, I thought, “Hmmm.  Maybe I should re-check.”  So I dug it out of the trash and – lo and behold – a very, very faint line was there! I proceeded to POAS four more times. The Husband wasn’t home, so I was flippin’ out all by myself.

I immediately g-chatted Ashley and Kath and e-mailed Jen, as being all by myself and wondering if it was real was TERRIBLE!  I moaned to Ashley, “I just wish I had kept a negative stick as a control to compare this faint line to!” and she jokingly suggested I use the only other female in the house – my dog Maggie – as a control.  She was totally kidding, but I thought she was a genius.  I raced Maggie outside, convinced her to pee in a cup, and tested her urine.  And – as you guessed it – she was not pregnant… but I was!   Yes.  I am the crazy person who used her dog’s urine as a control. 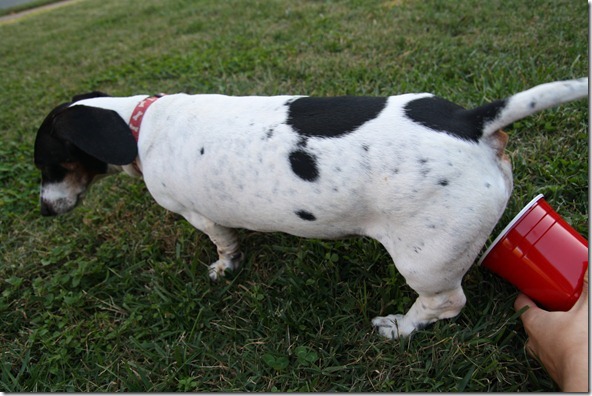 The Husband was due home any minute, so I quickly gift-wrapped a baby onesie that I had been hiding in my underwear drawer for about four months.  The onesie was a University of Miami onesie from The Striped Whale – it is so adorable.

When he arrived, I handed him the gift and told him to open it.  He just stared at the onesie without a single clue of what I was trying to say.  When I finally blurted out, “I’m pregnant!” he went into shock… repeating over and over again, “Are you serious? Are you SURE?”  It was awesome.  I secretly videotaped the 10-minute exchange (which was SO fun to watch back!), and here are a few stills: 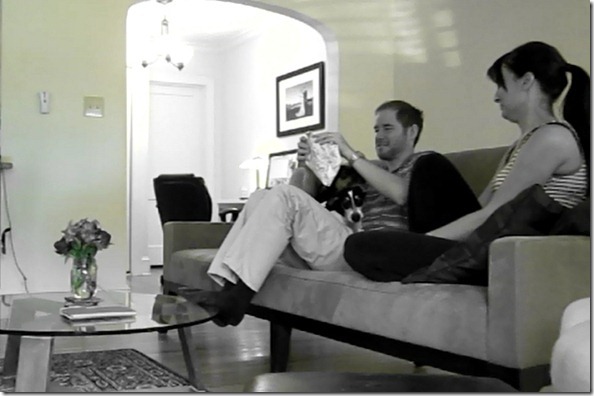 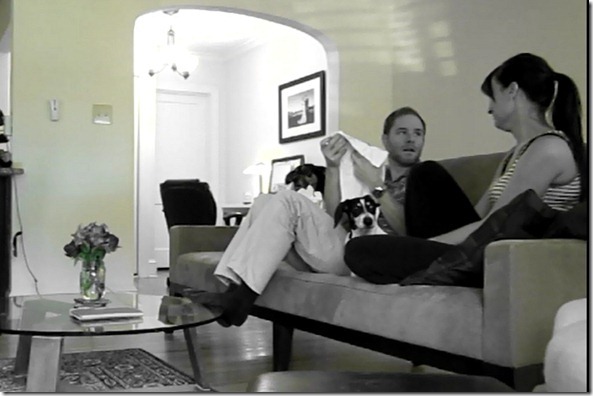 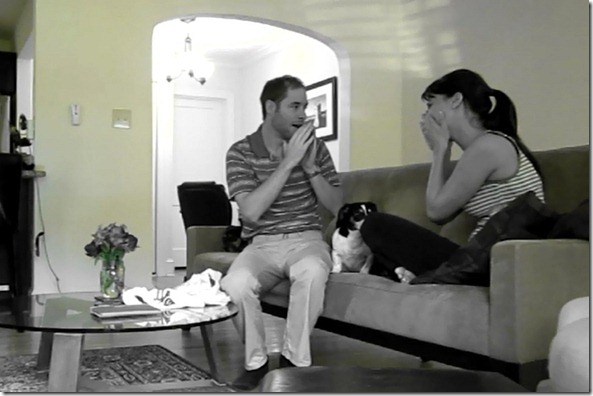 How did you tell your family?

We immediately Skyped DadHTP and told him ‘face-to-face’ – it was hard to do something creative with him being in California.  However, to tell my in-laws, we stuffed several helium pink and blue balloons in a HUGE gift box.  We handed the gift to my mother-in-law, who was very surprised when she opened it and the balloons flew out!

We told MomHTP at a restaurant – I went in early and asked the waitress to use a baby onesie to wrap the silverware, and I made Mom sit in that specific chair.  About halfway through dinner, she unrolled her fork and knife and nearly had a heart attack. 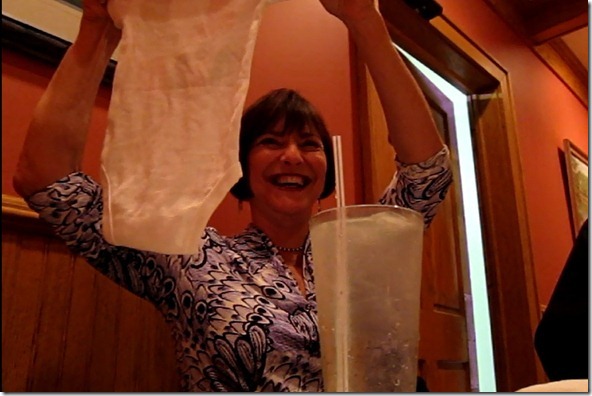 What were your first symptoms?  Are you puking your brains out?  Have you gained weight?

My first symptom was – oddly enough – burping.  I never burp, but suddenly, I began to burp 15 – 30 times a day (it’s sexy).  Morning sickness began when we were on vacation in Puerto Rico, but I haven’t puked yet – I’m not really a yakker.  I can best describe morning sickness as feeling perpetually hungover; it blows (and I’m pretty sure I have it easy).   And yes – the reason why I fainted in the middle of Nicole’s wedding ceremony is because I was pregnant!  Pregnancy changes your blood pressure, so standing perfectly still in the heat was a recipe for disaster.   Lastly, nope – I haven’t gained any weight.  I actually lost a pound because I stopped drinking and cleaned up my diet.  I cannot WAIT to get a real baby bump.

So far, so good!  I decided to drop out of the Half Marathon I had planned to run on October 22 because I wasn’t feeling so hot, but other than that, I’ve maintained 9 – 15 miles per week.  Exercise really helps me feel normal, especially in the morning.  And although there’s been a few times that I just wanted to eat toast and cereal for dinner (and did), I’ve mostly been able to continue a normal, plant-based diet with lots of veggies and fruits.  I can’t stop thinking about pumpkin pie, though.

It’s too early to tell… plus, we don’t want to know!  Seriously.  We have no desire to find out in advance whether it’s a boy or girl.  We would really be happy with either gender, and we both feel like this is one of the ‘last great surprises’ in life.  However, I have a sneaking suspicion that it’s a BOY!  I keep calling the baby ‘he.’

I know you’re all into holistic medicine.  Are you going to deliver on your couch while surrounded by a drum circle?

If I could… I would.  Minus the drum circle.  I would love to have a home birth.  Unfortunately, it is illegal for direct-entry midwives to perform home births in North Carolina.  It is also illegal in Washington DC, Alabama, Georgia, Hawaii, Illinois, Indiana, Iowa, Kentucky, Maryland, South Dakota, and Wyoming (you can home birth by yourself in those states; it’s just illegal for the direct-entry midwife to be there).  There are very, very few (if any – I can’t find a single one) Certified Nurse Midwives (CNM) in Charlotte who operate outside of hospitals.   So I think that limits my realistic and legal options to: delivering in a hospital with a doctor, delivering in a birthing center attached to a hospital with a CNM, or delivering in a birthing center with a midwife.  If anyone has any other information, please – pass it on!  My #2 goal is to go all-natural regardless of where I give birth (#1 is to birth a healthy baby).  But, of course, we’ll see what happens!

But… I’m happy. I’m so happy.  I’m overwhelmingly happy.  I know, in my heart, that it’s all going to be just fine.  Even if it’s scary; even if it’s hard.  This baby is already the best thing that ever happened to me.  And yes… this blog is about recipes and running and being healthy – but it’s also my real life.  And I’m so glad I get to share the experience with YOU! 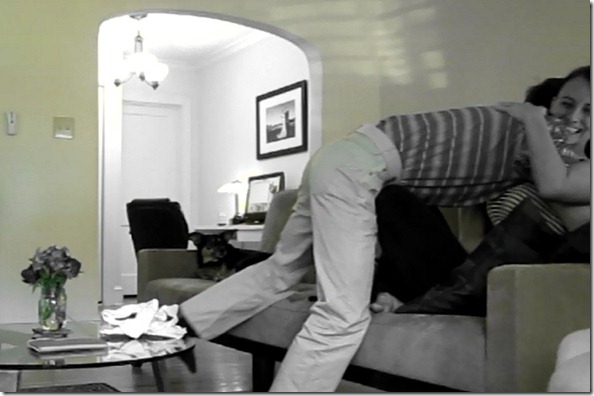 Thank you for reading and supporting us on this journey.  It truly means so much to the Husband and I.