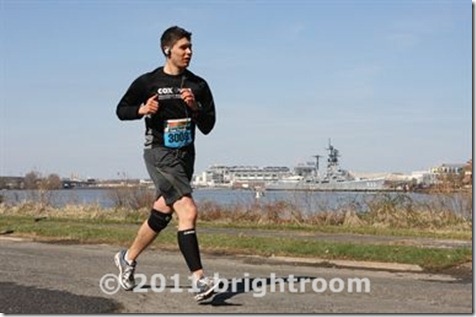 In His Own Words:

I’m not sure where most people’s race stories begin, but mine began on Twitter. I had long been considering training for a marathon when a few bloggers threw around the idea of The National Marathon. It was 3 days before my 20th birthday; it was in scenic DC; other people I knew would be running it. What more could I ask for? I was sold. And since I was already running 30-40 mile weeks, marathon training didn’t seem so bad. And then things changed…

November 16th, I stood up after lunch to find a sharp pain in my leg. I shrugged it off as "just one of those pains" and tried walking it off. When I ran four days later and could hardly walk afterwards, I knew something was really wrong. I had ran myself somewhere between a shin splint and a stress fracture.   For 6 weeks, I stopped running and stuck to strength training, short yoga sessions, and some other low-impact cardio.

My first run post-injury was 12 weeks and a day before the marathon. I ran 2 1/2 miles huffing and puffing and pushing through pain towards the end. I know some people are able to take a break from running and keep their fitness, but I was clearly not one of them; I felt like I was starting from scratch all over again.

I continued to train for the National Marathon even though in the back of my mind I was convinced I’d only run the half.  I chipped away at my long runs.  And then, 9 weeks into training, just when I thought things were turning around, I had my 20-mile run–the pinnacle of any marathon training plan–and it went awful. I over-dressed; I under-hydrated; and I realized just how out of shape I had let myself get due to injuries, the holidays, and overeating over the past 3 months. I was ready to throw in the towel right then right there for the whole marathon.

But I didn’t. I kept with the training plan in my head and watched what I ate.  A week after trying to turn things around, I ran a 6.5 mile loop a full minute faster than before and that was good enough for me. Suddenly things seemed possible. And with practically every blogger in town for the National Marathon, I knew I’d have all the support and motivation I’d need to push through 26.2 miles even if I ended up walking the second half.

The actual marathon was rather anti-climactic after everything I had gone through training. The first 10 miles were easy breezy until I stopped to use a porta-potty and lost my pace group. I tried catching up for the next 5-6 miles but realized I needed to run my race even if that meant not hitting the time goal I dreamed of wayyy back in October. I used the run/walk method for much of the second half which I truly think helped me finish as fast I could and not cause injury. 4 hours 19 minutes and 37 seconds later, I was done!

Here are other things Evan’s first marathon taught him.

What has your training recently taught you?  I’ve learned it’s okay to walk!