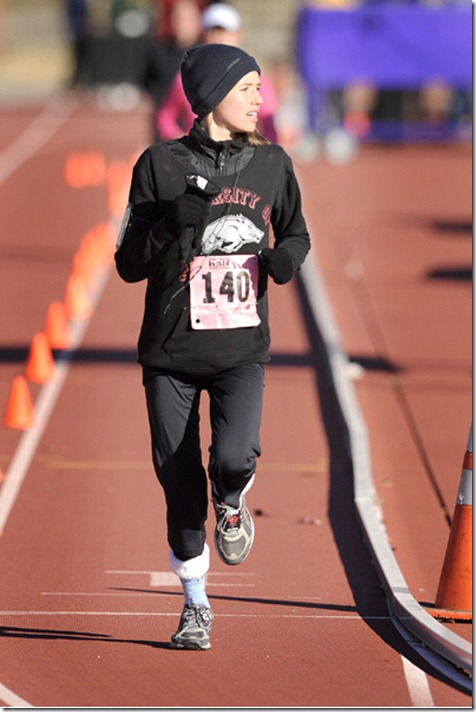 On December 12th, 2010, I ran my very first half-marathon!  I’d been checking the weather all week, so I’d known that it was going to be…hmm…chilly, to say the least. 20 degrees with an 8-degree wind chill. Upon this discovery my stomach might have turned a little.

As the big day drew closer, the nerves mounted. I had this recurring fear of not being able to finish. My calf had been aching for a couple of weeks…what if the pain was too much? I took it easy in the last few weeks of training, doing mostly low-impact cardio. I did what I could to feel…almost ready.

By the end of the week, one huge wave of dread gripped me: the weather. I had no experience running in conditions like that. Temperatures in the teens? With wind? How would I loosen up enough to even put one foot in front of the other, much less pull myself through 13.1 miles of it? All I could do was pray that the forecast would change, and in the meantime be thankful that it was not supposed to rain or anything awful like that.

No, come Sunday morning the sky was a clear and frosty blue, the sun was shining brightly, and it was absolutely frigid. Weather.com had made good on its promise this time. It was every bit as freezing as it was forecasted to be. I hastily dressed and pinned my race bib to my sweatshirt, strapped on my iPod, pulled on my hat and gloves, braced myself, said a little prayer, and stepped outside.

I arrived about 7:15. Not many people had shown up yet. Other [smarter] runners, I guess, had wanted to keep out of the cold as long as possible. It was about this time I realized that, yes, it was indeed f-r-e-e-z-i-n-g. I took shelter in the women’s bathroom for much of that 45 minutes between my arrival and the race start. I fumbled with my iPod. I texted my mom. I shot up a few more prayers. I probably should have stretched a little, probably should have drunk some water. Reason seemed to escape me; I guess my brain froze over.

I finally stumbled outside around 7:55 to the sound of the National Anthem. It was nearly time. The announcer made some joke about it being a balmy 82 degrees…in Australia. I laughed good-naturedly with the other hat-and-jacket-clad racers. The countdown…3…2…1…and we were off! I cranked up the volume of my iPod and got into a good rhythm, weaving in and out of runners, trying to find my place in the crowd.

The first water stop was located around mile 1. I slowed down to take a cup and swallowed the cold liquid…or tried to, at least. Imagine my alarm when I realized my throat was so numb from the cold that I could barely gag anything down. The majority of it ended up running down my face and on the ground. Giving up after a few attempts, I trooped on, wondering what exactly I had gotten myself into.

Miles 2, 3, and 4 passed quite uneventfully. The large group of runners had long since dispersed and spread out; I trotted at a comfortable-for-me pace. I fared better at the second water stop, actually managing to swallow this time. Not long after that, I spotted the neon green vests of the 1:50:00 pacers up ahead, and my heart gave a small leap. Honestly, I’d had no clue how fast I was going. I didn’t have my Garmin on me. So seeing that I was well on track to finish in under two hours was quite encouraging. I sped up a touch to catch up with the pacers, then passed them.

In the last two miles, my body suddenly felt so incredibly stiff, almost as if I couldn’t move my legs. I didn’t want to slow down, not now, not when I was so close to the finish. I’d been neck-and-neck with a girl in a white hat, but she started getting pretty far ahead of me toward the end. At one point one of her gloves fell out of her pocket; without thinking, I swooped down and grabbed it as I passed. I attempted to catch up with her and give it back, but she was going strong and I was struggling. I took a couple of walking breaks, very short ones, and tried to ease the all-over tightness I was suddenly feeling.

Thank the Lord the home stretch was a consistent downhill slope. Realizing that I was almost there was the motivation I needed to really pick it up. The frozen state of my muscles seemed to vanish as I galloped down Razborback Road and into John McDonnell field. One loop around the track brought me to the finish line. I could see from a distance that I would make it in under an hour and 46 minutes. I pushed with all my might and gave it all I had in those last seconds, and thrust myself through the finish line in 1:45:46.

The moments directly following that are a little blurry. Volunteers were simultaneously putting a medal around my neck, wrapping me in a silver sheet, and taking the timing chip off my shoe. My mom was hugging me and I was attempting to speak but finding it very difficult to do so. Next minute I was coughing uncontrollably and discovering that my lungs were in pain. It hurt to breathe deeply. Once I’d gotten inside a tent, out of the wind, and drunk some water, I was able to talk almost normally again. I ate a banana. I finally started to feel cold for the first time in nearly two hours. I must say my outfit had done a good job of keeping me warm, though my face had suffered the elements quite a bit. I was still clutching the fallen glove in my hand and eventually found its owner. She seemed happy to get it back.

This half-marathon was such an awesome experience. There will definitely be more in the future…more races in general. More 5Ks, 10Ks, 15Ks, half-marathons, and maybe – some day – the big 26.2. I don’t know when I’ll have the time to train for that one, but I am determined to make it happen. It’s quite strange for me to look back a single year, because at this time one year ago, I thought I hated running. I thought it just wasn’t for me. I thought it was something that other people did. Anything faster than a brisk walk was beyond my range of ability.

But the year of 2010 brought a new passion to my life, and made me realize that I am capable of more than I could have ever thought. Back in July, I felt overwhelmed by the thought of running 13.1 miles. Could I ever make it to that point?  Now I’ve successfully completed TWO half-marathons…my second one was two Sundays ago. And would you believe I finished in the exact same time: 1:45:46?! Crazy! I’m determined to break that streak eventually! 🙂

Race Recaps is a new blog series!  The posts will feature stories from readers + other bloggers who just completed races of all distances and paces… including 5Ks, Marathons, Ironmen, and Triathlons.  If you have a story of an epic recent race, send the recap + picture to caitlinjboyle@gmail.com.