This is the story of how Henry was born… 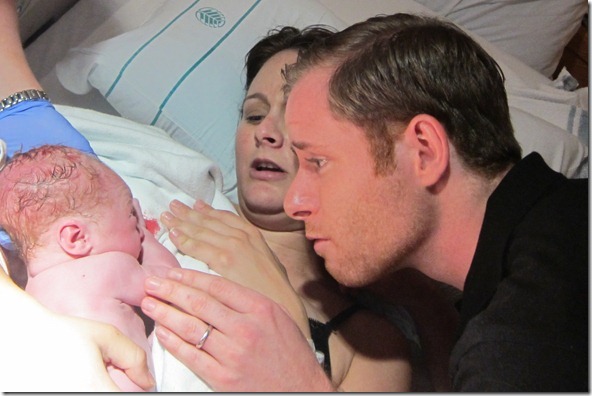 We have a mattress topper that I lovingly refer to as “the cloud.”  The cloud is a memory foam topper and is, quite possibly, the most amazing possession that I own.  I can’t sleep well without it.  Throughout my third trimester, I became obsessed with the idea that my water would break while I was sleeping on the cloud, and I’d ruin it.  Eventually, I put a waterproof mattress cover, two towels, and a trash bag under my fitted sheet and over the cloud.  Most women don’t even have the dramatic break in water you seen in the movies, and the odds that it would happen my bed were even slimmer.  But like I said, I love the cloud.

Thus, I should’ve known better to receive acupuncture right before going to bed!  A mere five and a half hours after the Husband gave me an acupuncture session to help move along labor, I woke up and knew my water was breaking.  I quickly stood up, grabbed a towel off the bed, and pressed it against me.  “Kristien!” I stage-whispered. “Kristien! KRISTIEN!”  Finally, the Husband woke up.  I told him my water had broken, and he looked terribly confused about what was happening.  “Are you sure?” he asked drowsily.  “Oh yes,” I replied.  “I’m 100% positive.”  I paused and slowly continued, “…. But I don’t have any contractions yet.”  This was not good.

Our Bradley Method natural birth classes taught us that, in this scenario, we both should go back to bed and try to sleep; the contractions would start soon enough.  Bradley also taught us to labor at home as long as possible and arrive at the hospital deep in active labor to minimize the risks of ‘unnecessary’ medical interventions.  Many of the women in my class arrived at the hospital an hour or two before delivering, basically pushing in the parking lot.  But I had a confounding issue looming over my head:  I was Group B Strep positive.  Group B Strep is a very common bacteria infection (present in about 25% of healthy women) that can be passed to the infant during labor.  While it’s not a big deal that I have the bacteria, if Henry had contracted it during delivery, he could’ve suffered from a variety of health issues, such as sepsis, pneumonia, and meningitis.  The risk of passing Group B Strep to a baby during labor is 1 out of 200 without antibiotics and 1 in 4000 with (source).  To ensure protection, the mother needs at least one dose of antibiotics four hours prior to delivery – it’s even better to get two doses.   It was obvious to Kristien and I that we had to make it to the hospital with more than enough time to spare to ensure I had antibiotics in my system at least four hours prior to delivery.

Very often, a woman’s water doesn’t break until she’s deep in labor.  My water breaking before contractions started further complicated the Group B Strep issue because the protective ‘seal’ around the baby was broken, exposing him to greater risk.  However, I really did not want to arrive at the hospital without any contractions, as I was concerned my birth team may press us to unnecessarily artificially induce contractions with Pitocin or another drug.  After a little discussion about our options and going over our midwife’s recommendations, we decided to give it a few hours and see what happened.  I said to Kristien, “I have complete faith that my contractions will start very soon… let’s just wait and see.”

Neither of us could sleep as we waited.  Kristien showered, shaved, and laid out his clothes; he also pulled together the final odds and ends for our luggage and prepped the car. 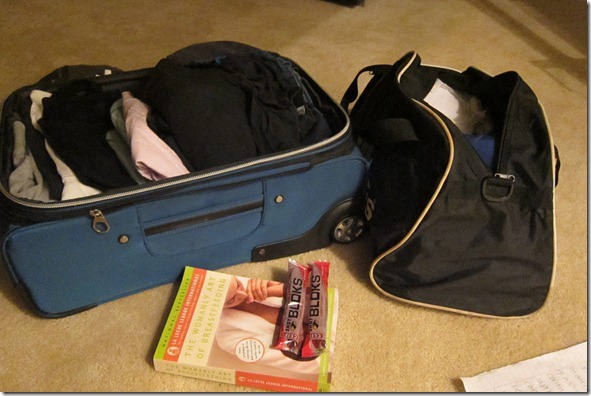 I cleaned the kitchen, folded laundry, and wrote a blog post.  Around 3:00 AM, Kristien went to the guest room to sleep, and I laid in our bed, waiting for contractions to start.  At 3:45, I had my first contraction.  I was more excited than anything!  I used an app on my iPhone to time the contractions and realized they were about 10 – 15 minutes apart.  At one point, I must’ve fallen asleep because I woke up and noticed that it had been 35 minutes since my last recorded contraction.  So that means that the night before I delivered Henry, I got a grand total of two and half hours of sleep.

Around dawn, I decided to call my mother so she could begin driving from Knoxville to Charlotte.  I showered, blow-dried my hair (why not?), and cooked Kristien and myself a big breakfast.  I woke him up an hour later and, after eating, we decided to head out the door. 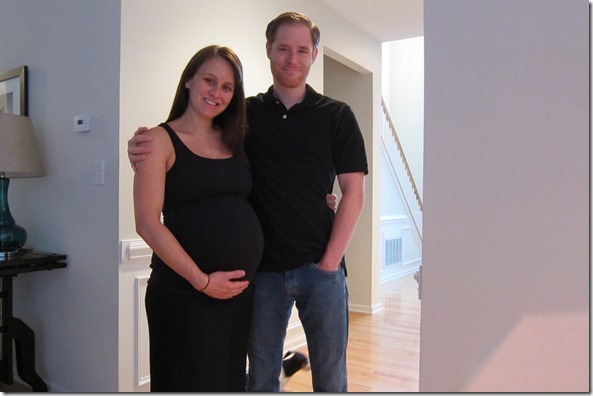 It was strange – I had a lot of trouble leaving.  I kept putting things away and straightening messes.  I hugged the dogs a million times.  Kristien was sitting in the car, hollering at me to hurry up, and I still couldn’t leave.  I wasn’t scared of labor, but I was weirded out about leaving the house – I knew that we’d leave as two and come back as three.

By this point, my contractions were a little more frequent and more painful.  I had four contractions in the car, and it was excruciating to have to sit through them.

When we arrived at the hospital, Kristien parked in the furthest corner of the lot because I wanted to walk to the front door (walking moving things along).  By the time we were checked into triage, it was about 8:30 AM – I was glad we had left when we did because check-in took much longer than anticipated (somehow, the hospital misplaced my pre-registration information).  I was contracting every four to six minutes, and I would estimate my pain during the contractions were about a 5 or 6 on a scale of 10 – not too bad. 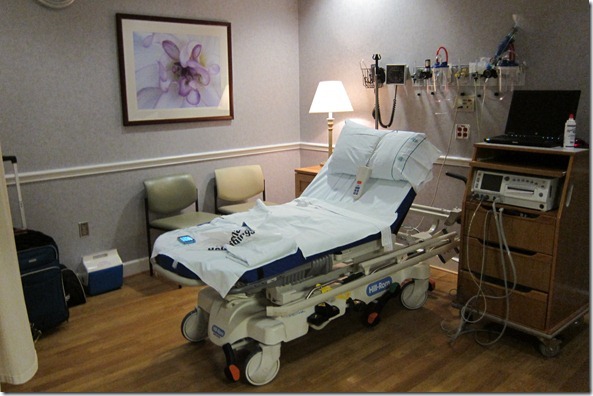 And that’s when I met my nurse, Debbie, also known as the best nurse that I could’ve possibly been assigned.  She was warm and kind, said all the right things through the entire delivery, comforted me, and even stayed two hours after the end of her shift just to see Henry be born.  She practically functioned as my doula.  After Debbie ran some tests, my nurse midwife, Sage, came into the room and ‘checked my progress’ – I was about four centimeters dilated and 90% effaced.

For those who are unfamiliar with physical process of labor, the cervix (the opening to the uterus) has to dilate from 0 centimeters to 10 centimeters so the baby can move through the birth canal.  It also has to efface, or thin out, completely.  I was pumped that I was so far along! 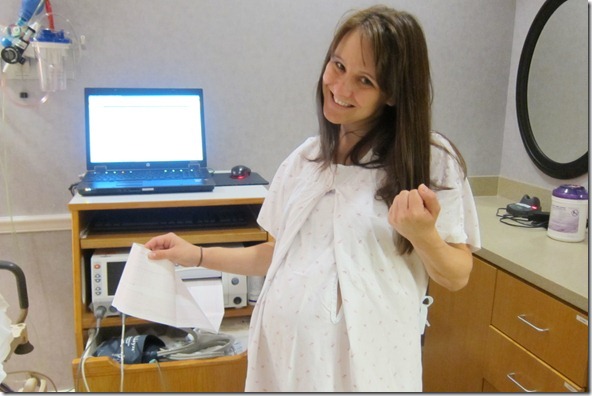 They moved me from the triage room into my delivery room.  At this point, our Bradley teachings really kicked in for Kristsien.  Bradley is a husband-coached style of natural childbirth, and Kristien had a very important role to play as my supporter and advocate.  He went over our birth plan with Debbie and Sage, emphasizing the most important things to me were that I was not offered an epidural or contraction-increasing drugs; that we let the cord pulsate after delivery; that we took the placenta home with us; and that he announced the baby’s sex.  The birth team was completely on board. 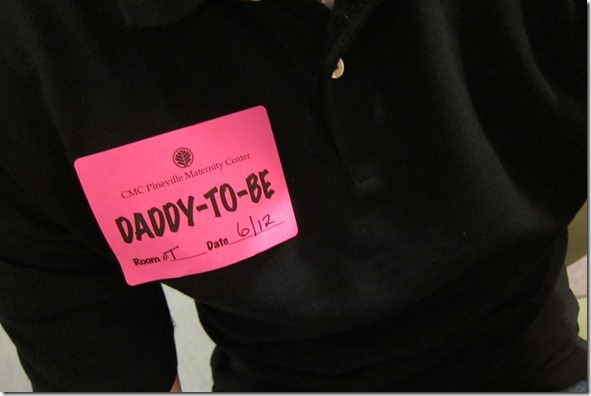 Debbie immediately started my antibiotic drip to ensure the baby was protected against Group B Strep.  After I had my full dose, we were left alone in the room for a few hours, and my contractions started to get more and more intense.  Kristien suggested that I try walking the halls, and we slowly made our way to the nursery so we could look at the babies.  It was so crazy to think that in a few hours, we would hold our baby!

It was around 11:00 AM, I had been contracting for over seven hours, and I was completely convinced that I would have the baby by 3:30 PM at the very latest.  Oh, if I only knew the truth….