Happy Moan-day.  I could’ve slept better, so I made it up to myself with this delicious breakfast. 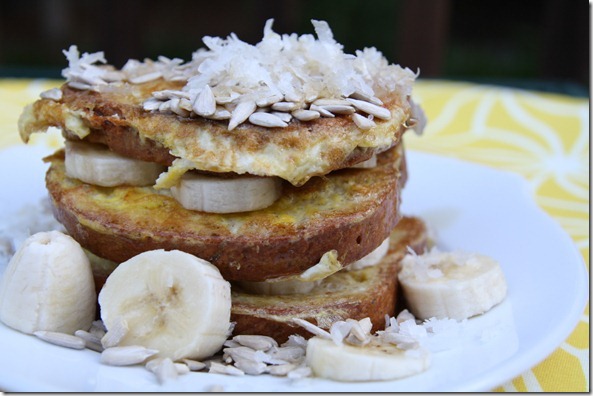 Looks fancy-pants, but it’s really just plain old French toast with banana, sunflower seeds, and coconut, all stacked together in a pretty way.

Presentation counts for a lot.  Maybe not for 8 hours of solid sleep, but for something. 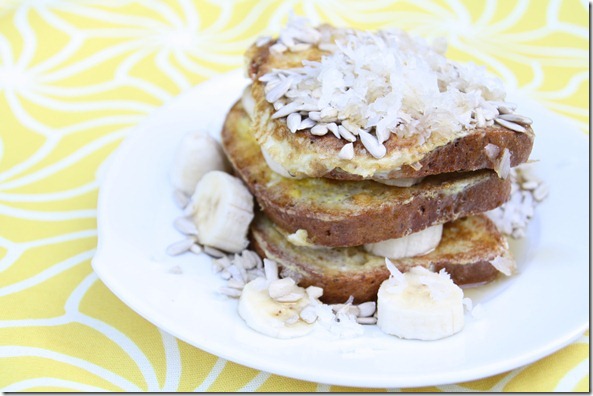 In lieu of the traditional three-question FAQ Monday format, I thought it would be fun to do one more involved question. I recently got an email from a reader named Dana, who was a bit upset because her first race – a 5K – didn’t go exactly as she had hoped.  “I wasn’t prepared for the fact that the first mile was uphill,” she wrote. “I had practiced entirely inside on a flat treadmill and even though I managed up the hill for the first mile, I was toast by 1.2 and ended up walking a majority of the rest of the race.”  Since then, she’s felt kind of turned off by running and wanted some advice.

I wrote back that I had to smile because my first race experience sounded pretty similar.  And that brings me to today’s question…

What was your first race experience like, and what lessons did you learn from it?

My first race was a 10K in Pittsburgh.  It was five years ago and a few months after I had decided to get truly healthy and start exercising.  Although I have lots of friends who run races now, I only had one running friend (BFF Lauren) but she didn’t live in the ‘burgh anymore by then.  I hadn’t discovered running blogs yet, so I was on my own as far as training went.  I used a plan that I found online and trained almost exclusively indoors on a treadmill, as the race was in the colder months.  I think I ran the race distance before the actual event, but I was pretty terrified of running 6.2 miles outside, alone.

The day of the race, I woke up and it was freezing – it might have been flurrying.  I wanted to back out but had told all my coworkers that I was doing the 10K.  I had no fancy cold-weather running gear, so I wore a pair of thermal underwear with running shorts over it, a cotton beanie, and a regular North Face jacket.

The Husband and I were living together {in sin} at that point, but he couldn’t come with me because he had to work.  Driving to the start all by myself was so scary.  I had no idea how to put on a timing chip or a bib, but I figured it out by watching other runners.  When the gun when off at the starting line, I just tried to pretend it was a normal run.  But the first mile was totally uphill.  It was grueling.  I probably came out too fast (rookie mistake that I still make every race!) and felt totally burnt out by the top… And then… I ran by my car.  Yes, I ran right by my car at the point that quitting sounded perfectly reasonable and amazing.  I stood at the top of the hill and debated getting in for at least a minute.  I almost got in my car and drove away, no joke!

I realized how embarrassed I would be to quit a 10K in the first mile – more so than if I blew it off altogether – so I trudged on.  I got warmer and my cotton clothes got soaked, which made me cold again.  But I began to have… fun!  By the time I finished (in 1:01 – which would actually be my unbeatable 10K time for a long time), I was hooked on running.  I left the finish line party and drove the Husband’s work (a seafood restaurant) and ate the biggest meal of my life.  And the rest, as they say, is race history.

Next post: How to Take Care of Your Swim Gear