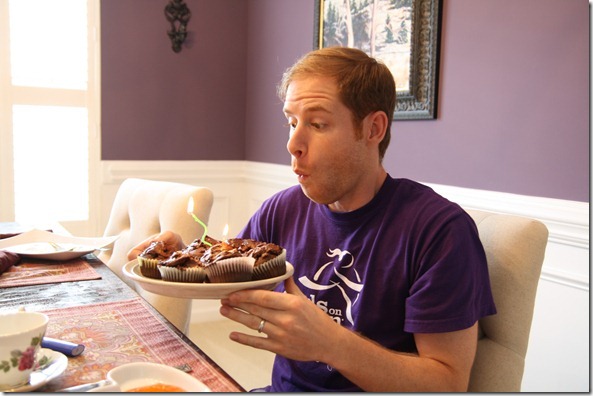 I hope you had a fabulous Tuesday.  We certainly did.  I love birthdays – it’s nice to focus entirely on a loved one for a day.

In addition to golfing, we celebrated the Hus by heading to Girls on the Run – the girls gave him a cute homemade card– and having a nice dinner with DadHTP.  Dad baked his famous birthday cupcakes, and I was in charge of the meal.  I had asked the Hus what he wanted for dinner, and he requested a meal of sushi, deviled eggs, and mashed potatoes (all of his favorite things).  Hah!  I made Kristien what he requested, but Dad and I got personal pizzas.   As tempted as the combo of sushi, deviled eggs, and mashed potatoes sounded… 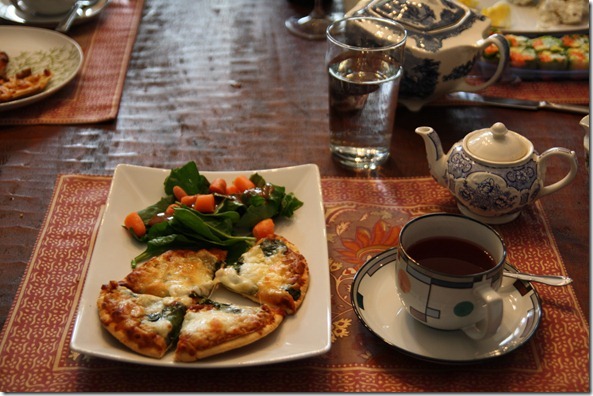 What would your ideal birthday meal include?

Time for a few more success stories to celebrate the release of the Healthy Tipping Point book!   Happy reading.

Caitlin’s Break Up to Build Up 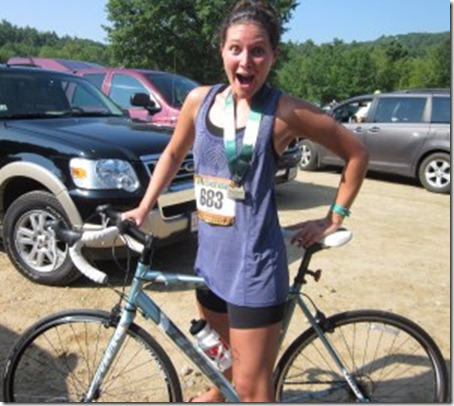 Caitlin wrote: In 2009, 3 days before my 25th birthday, my boyfriend of two years broke up with me.  To say my world came crashing down is an understatement. The previous two years I had intertwined my world so intimately with his and with a planned trip to Ireland a few weeks after that upcoming birthday, I was truly expecting a ring. Well, that didn’t happen! Not only was this the first time I experienced true heartbreak, it was the first time I felt like I failed at something. Yes, I cried myself to sleep for way too many nights because I missed him… but I also felt lost, embarrassed, and like a failure. Everything had become a "we" so who was "I" without this guy?

After a few months of being at my all-time-low, I woke up and realized I wanted to be happy again. And most of all I wanted a balanced healthy life, one where if my pride was hit again, whether it was a relationship ending or a losing a job or gaining weight, I’d feel confident that I had the coping mechanisms to get through it. I realized immediately that I needed a support system. I asked my family and friends to be there for me as I tried to figure out who I was and so many of my friends went above and beyond what I could have ever expected of them. Then I started to remember what hobbies I enjoyed before having that guy, ones I somehow let slip away while in that relationship.

Slowly but surely, I started running road races, hitting the gym, having fantastic girl’s nights with way too much wine and gossip, and finishing my master’s degree. I won’t lie and say that every day was easy because it wasn’t – and as I started dating again it was quite the roller coaster of emotions.  But now, in 2012 I have my master’s degree, I’m a supervisor at a job I love, I’ve completed 3 triathlons, 2 duathlons, and countless road races. I even signed up for my first half-marathon this October (I’m terrified!). And when I was least expecting it, I met a new guy. Someone who became my best friend and continues to support me in all my friendships and my passions. We’re getting married this December.

Yes, on November 23rd, 2009 my world came crashing down, but the best part is that I was forced to rebuild it from the ground up. I learned who I am, what I love about myself, what I’m still learning about myself and what I can give to someone else without giving up me. Without that experience, I don’t think I’d be as happy, confident, and thankful for everyone I have in my life today. (You can read more on her blog.) 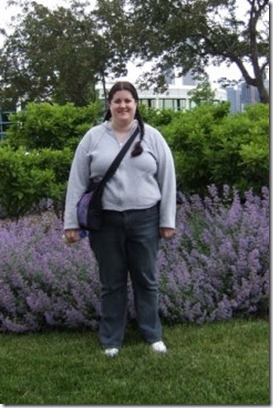 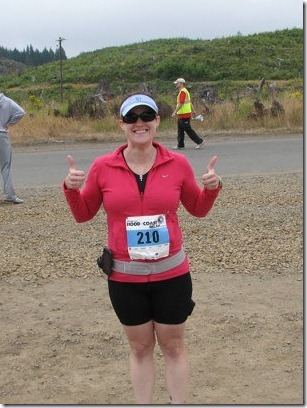 Lisa wrote, What I wanted was to fit in. For the first half of my 20’s I’d been obese, hiding underneath the baggy 2X shirts and 24W sized jeans and felt like life was passing me by. I was no longer comfortable in my own body because my body was rebelling against the damage I was doing to it; high blood pressure, aching joints, high cholesterol, and the approaching threat of diabetes. What I wanted was to be healthy.

What did I do about it? I got off my couch, vowed not to continue to always eat pizza or ice cream (trigger foods), and get my life on track before I ate myself to death. I was 26 years old and weighed more than 250 pounds. With determination and willpower that I had never had before, I started my journey to lose 110 pounds. One of the things I learned in my journey was that life didn’t have to be lived from the couch.  I love swimming. I love hiking and walking.  I swam in the nearby pool a few times a week. I counted my calories to hold myself accountable. I found that I enjoyed exercising and making good food choices.The weight came off quickly in the beginning, and then it slowed down. I did not give up when I hit plateaus and almost two years later, I weighed in 100 pounds lighter.

My life has changed in so many ways because I got healthy. Gone are the 24W jeans… Gone are the dizzy spells from high blood pressure… now my doctors ask me if I run marathons because my numbers are so good! Oh, and speaking of runners…I became one! I ran a 5k, an 8k and then the Hood to Coast Relay Race. I biked 55 miles in Reach the Beach, 72 miles in the Portland Century and will be doing a full century this summer. I am so happy I changed my life. I am so happy I got healthy!  (You can read more on her blog.) 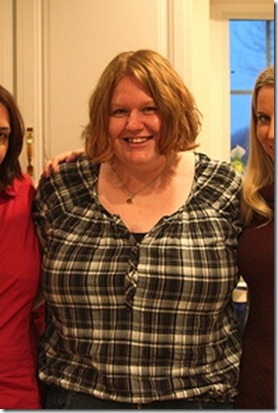 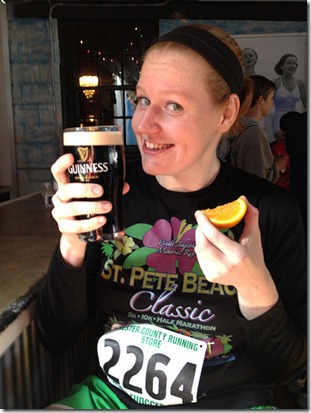 Sara wrote, At the end of 2010, I felt completely broken inside.  I was so unhappy and so determined not to let anyone around me know it.  My weight was out of control and I just felt SO unhealthy and tired all the time. I was so miserable that for the first time in my life, I decided I did NOT want a Christmas tree.  I thought, "Why bother?"  It was as if the amount of effort required to go out, buy a tree, put it up and decorate it was far too much effort for someone I didn’t even like.  (That someone was ME.)  I ended up breaking down and buying a $15 3′ fake tree from Wegmans in a last-ditch act of self-pity and even managed to put on a smile as I decorated it with only the most special of my ornaments.  When people expressed their shock that I would even consider getting a fake tree, I used my "crazy" and "busy" life/schedule as an excuse for not getting a real tree and even managed to convince myself that I was okay and made it through the holiday season with only minimal crying.

When the New Year arrived, something in me just snapped.  It was as if, all of a sudden, I wanted to LIVE again.  And so, on January 2nd of 2011 year, I joined Weight Watchers.  I spent that first month getting my eating habits back under control.  In February, I did a full month of Jillian Michael’s 30-Day Shred.  And in March, I joined my local YMCA and discovered that group exercise classes were actually NOT scary.

In April, I spent a week on the west coast, during which I hiked to the top of a (small) mountain in the desert of southern California and climbed some red rocks in Sedona – two things I wouldn’t have been able to enjoy at all just three months earlier.  In June, I decided I wanted to run a 5k for my 30th birthday in October (this coming from a girl who used to swear up and down she’d never be a runner) and started the Couch to 5K program.  And on the morning after my 30th birthday, I ran my very first race (and raised over $1,300 for the Bonnie J. Addario Lung Cancer Foundation, thanks to my team of amazing friends and family members who ran and walked with me).  Since that first 5k, I’ve fallen head over heels for running, have shaved nearly three full minutes off my 5k time and will be running the 10-mile Broad Street Run in Philly on May 6th (and my first half marathon in September)!

Since making the decision to take control of my life again and get healthy, I’ve lost 76 pounds.  I feel alive and happy and I welcomed the number "3" to the front of my age with crazy wide open arms last year.  30 feels good, better than any other year or age or time of my life has ever felt, and I am so excited to continue living this new, amazing life.  (You can read more on her blog!)