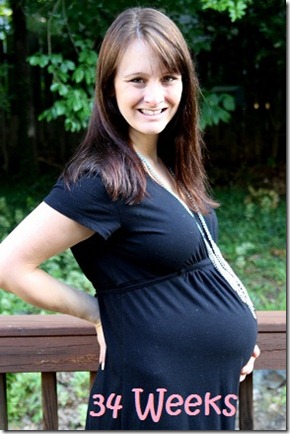 What a difference 20 weeks makes!  Today, I’m 34 weeks pregnant and feelin’ pretty good.  It’s amazing to me that I will be in charge of a baby in six weeks or so (when did I become an adult?!).  Baby is now 4.75 pounds and 18 inches long.  The central nervous system and lungs are maturing and, at this point, if BabyHTP was born with no other health issues, she or he would probably be fine.  Whew.  (Source)

But please.  Stay put for a few more weeks.  I’m just not ready for you to come out and play! 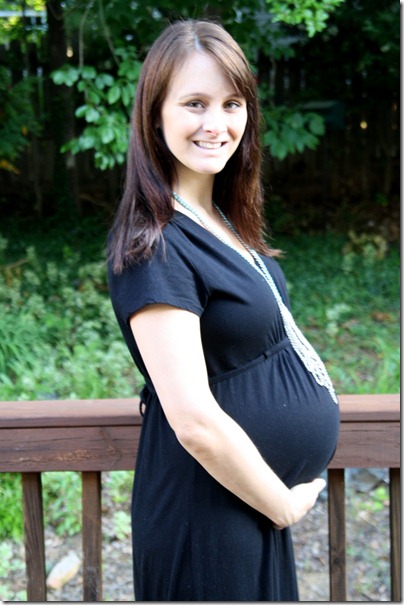 This week, let’s talk about what I know is a controversial topic for many – sleeping arrangements.  Where does baby sleep? Where does mom sleep?  Where does dad sleep?  Oh, wait.  I forgot – I’m never going to sleep again.  Hah hah.  You know what I mean.

The way I see it, there are three general places that a baby can sleep.

One: in a crib in the nursery (side note: nursery tour is forthcoming! I need to finish up some details – but Kath snuck in a fun sneak peak on her blog.) 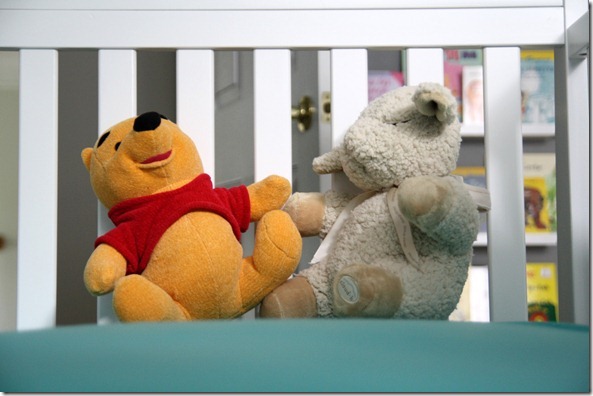 Two: in the parent(s)’ bedroom in a bassinet or crib. 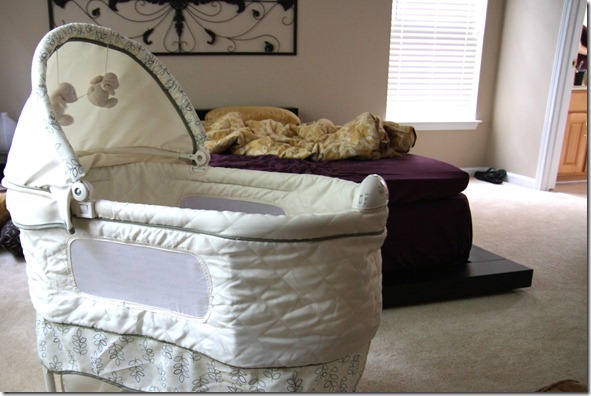 Three: physically in the parent(s)’ bed.  Doggie friends not required. 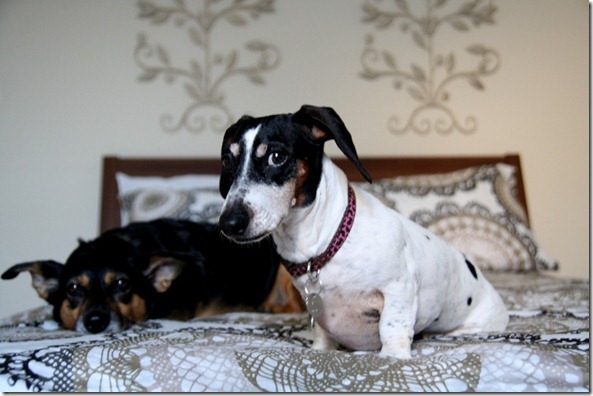 I always thought the term ‘co-sleeping’ meant in the same bed, but it actually just means ‘close to the parent.’  So Location 2 and 3 are two forms of co-sleeping, but Location 3 is a form of ‘bed-sharing.’

Determining sleeping arrangements was a bit stressful for the Husband and I, as we felt like we were juggling with multiple issues.  First, and most importantly, is the baby’s health and wellness. Some interesting facts:

Kristien and I took at all the data and decided that, for the first few months, co-sleeping in the bassinet at night was ideal for us.  Beyond the reduction in SIDS risks, this will definitely make breastfeeding easier.  Our nursery and master bedroom are on different floors – and I can’t imagine trooping up and down the stairs all through the night, especially at first when the baby is hungry all the time. 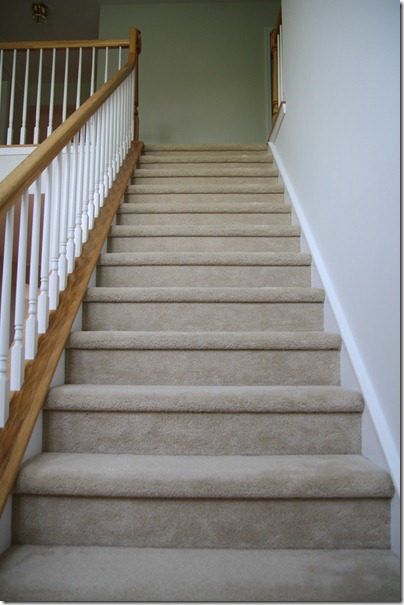 However, I’d like to put the baby down for longer daytime naps in the nursery so they just get used to being in that room (and use a monitor to keep an eye on them).  We’d like to transfer her or him to their own room after a few months, depending on their sleep habits.  I know the SIDS Institute recommends co-sleeping for six months, but I’m not sure if that will work for us.  We’ll see.

The next concern: where will we sleep?! 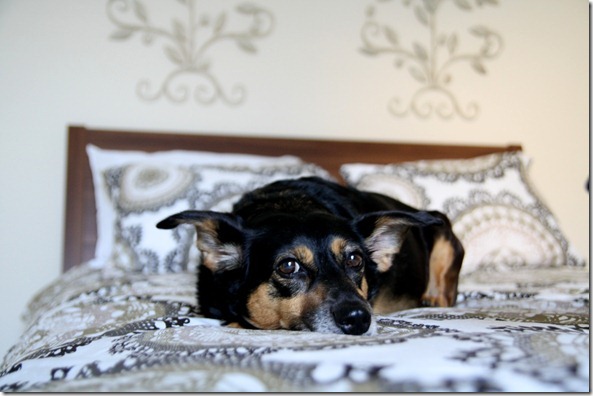 While I’m hoping that parenthood imbues us with magical sleeping powers, I’m a little nervous because both the Husband and I are really crap at functioning on low levels of sleep.  I’ve always been a sleep wussy.  I, of course, will get the worst end of the deal because I’ll (hopefully) be exclusively breastfeeding for four to six weeks, and then we will probably switch to breastfeeding/pumping and bottle feeding (why four to six weeks?  Bradley Method recommendations say this is the prime time to introduce a bottle so that baby won’t reject breast or bottle but be receptive to both – I’ll let you know how this works out…).  After this point, in theory, the Husband could give the baby a bottle of breast milk at night, but I’d probably still have to wake up to pump.

Remember how we’re doing a SAHD/SADM (stay-at-home-dad / stay-at-home-mom) switcheroo with our work schedules?  Basically, the Hus is going to be on Daddy Duty on Monday and Friday while I work from home, and I’ll be on Mommy Duty on Tuesday, Wednesday, and Thursday while he works at the clinic.  Because Kristien’s job involves a great deal of brain power, we decided that it’s probably best for him to sleep in the guest room on Monday, Tuesday, and Wednesday nights so he’s not woken up by the baby.  I’m not looking forward to separate sleep spaces for half the week, but it’s probably for the best.  I may sleep in the guest room, too, on my work nights once we introduce the bottle and Kristien is on Daddy Duty – even if I wake up to pump, I’m sure I’ll sleep more deeply without the baby right next to me.  And sleep is an important part of being a happy parent.

So – that’s our plan.  Like so much of this baby stuff, I’m not sure how it will work in real life, but having a game plan for sleep makes me feel better about the upcoming changes.  Until then, I’ll be maximizing my shut-eye as much as possible, thankyouverymuch.  I’m getting sleepy just thinking about it. 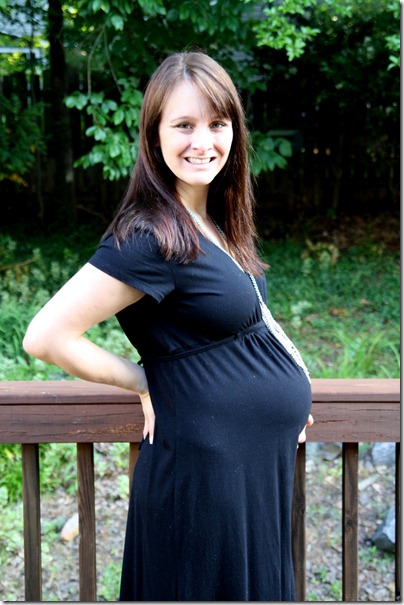 Your turn!  Where did your baby sleep?  Did you and your partner always share a bed when the baby was brand new or did one of you sleep in another room?

Read all my pregnancy updates here.