Today is a short work day because it’s my mother-in-law’s birthday, and we are closing the clinic to have a fun family day.  However, I felt like it was my birthday this morning because the Hus made me breakfast in bed (a birthday tradition for us).  It was a nice surprise.  Whatta guy. 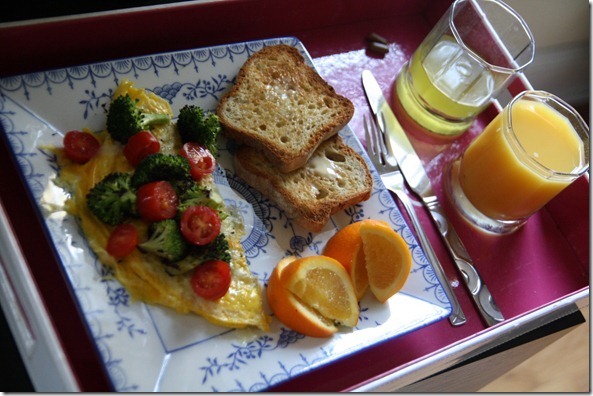 Omelet with tomatoes and broccoli

Liquid B Vitamins <—I don’t take these every day, just when I’m really dragging. 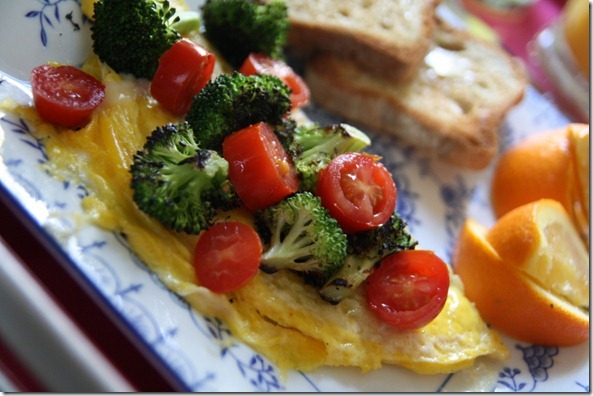 A few people have asked for an update on (lovingly) kicking James out of the bed… so here it is!

Last week, I wrote that we had moved him from our bedroom to the guest bedroom, and he wasn’t liking it very much.  We’re moving James, and not Maggie, out of bed because James is a terrible sleeper and wakes us up all night long.  Some readers said that we were breaking up the ‘pack’ and suggested we try some alternatives.  The Hus and I read through all the comments and decided that we weren’t going through things the right way.

I mistakenly believed that if we slept through James getting back up into bed from his own bed and didn’t immediately correct him, he wouldn’t understand what he was doing wrong… which is why we had literally locked him out.  A few people said it was okay if we didn’t remove him for a few minutes (or even hours) because he was still in the act (of being on the bed).  They said that as soon as we noticed he was in bed, we should just gently push him out and direct him back to his dog bed.  That made sense to us so we decided to try the technique.  And Stephanie C suggested we check out the Cozy Cave, a dog bed with a built-in cover so the dogs can ‘nest.’  She thought James would be more likely to stay in his own bed if we got him a Cozy Cave.  We really liked the idea of the Cozy Cave so we rigged up our own (free) version. 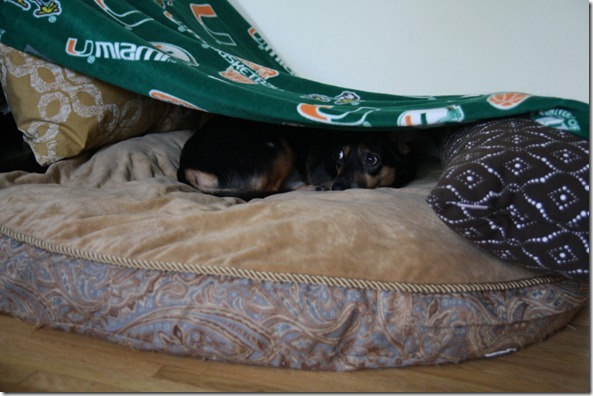 I am happy to report that after three nights of one attempt to get back into bed, James has fully settled into his own Cozy Cave and is sleeping in his own bed, right next to ours.  Last night, he didn’t wake us up once.  It is heavenly, and everyone seems happier. We found a solution that really works and breaking James of the bed habit wasn’t hard at all. 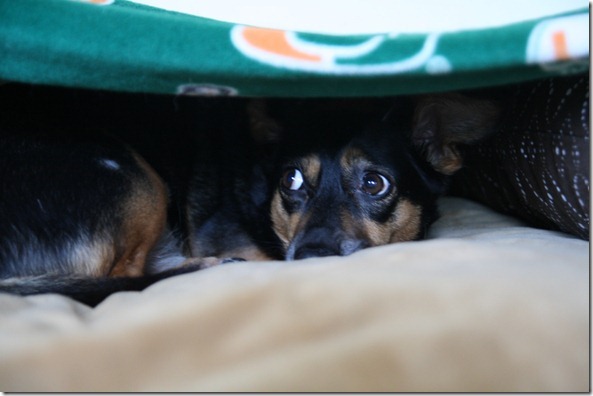 So, I just wanted to say THANKS for all your doggie training feedback!