The Happiest Place on Earth

We have yet another snow day.  All of the Husband’s patients called off, so we decided to brave the elements and go to yoga.  It took twice as long as normal to get there – our door was frozen shut! 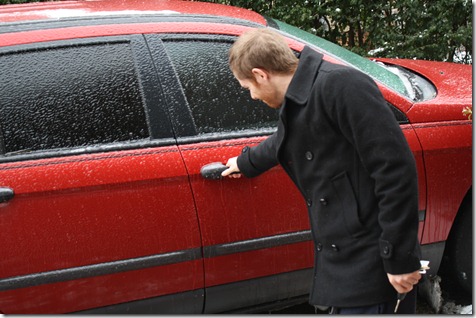 Yoga was CRAZY HARD.  It was a hot vinyasa and some of the pose sequences literally brought me to my knees.

Came home and made a wonderful lunch.  I’ve gotten kind of bored with lunches lately so a new grain was exactly what I needed to spice things up. 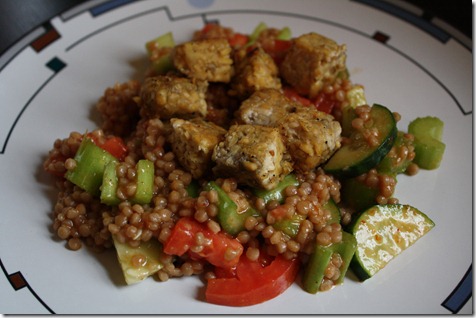 The star of the show was Israeli cous cous, which is basically giant cous cous.  Love!

Also in the middle: 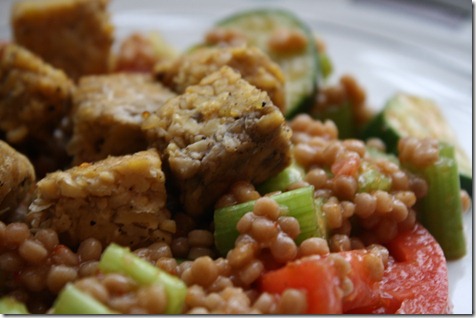 Today is (close to) my one year anniversary of running the Disney Marathon (recap).  Disney was my first marathon.  I ran it in 4:53.  10 months later, I ran my second marathon and shaved 32 minutes off my personal record!

Running Disney was an awesome experience because it taught me that I’m capable of whatever I put my mind to.  I never thought I could finish a marathon… but by golly, I ran and walked my way 26.2 miles and never felt more proud.  Plus, I got to run with my BFF Lauren.  It was a great experience! 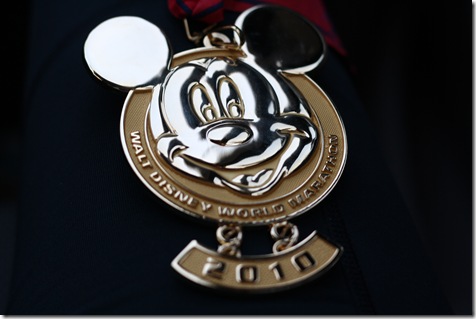 To celebrate my Disney anniversary, I thought I’d share a story from Betsy, who ran the Disney Half Marathon this past weekend.

In September, Betsy emailed me to say:  This past Saturday night I decided to stop the excuses (bad knee, I run too slow, not enough time) and just do it. After some Googling, I realized I’m going to be in Orlando with my family during the marathon and half marathon. That night, I signed up for the Disney Half Marathon! With some help from my brother’s fiancee Whitney, I designed a training plan and fit it to me.  Am I nervous? Oh my gosh, yes. But this time around I’m not letting those nerves get the best of me and keep me paralyzed on my couch. ! I WILL be sending you pictures of me with a medal after crossing the finish line of the half marathon.

And earlier today, I got this email:

Betsy wrote: I wanted to let you know that I ran the Disney Half-Marathon this past weekend and killed it!!!!!! It was my first major race and hands down the hardest physical thing I’ve ever done. I’ve had 4 knee surgeries so getting my body ready for 13.1 was a big process. I was slow and steady but finished with a smile on my face!  Miles 1-5 were a blur. I do remember passing by 3 and thinking oh my gosh – 10 left?!?!! 5-7 were through the Magic Kingdom and it was a great distraction. I saw my entire family around mile 7, which is when the pain was starting to set in. I was having a rough time but their cheers pushed me a little more. I hit an emotional wall between miles 9-11. The furthest I had run in training was 10 miles and so when I was struggling around 9, the negativity slipped into my head.  I got really down on myself and began texting expletives to my friends. With the help of some texts I received back, I realized I would never finish with a negative mind-set and turned it around. I was so happy I ran with my phone in my water belt, and I’m also glad I put my name on my shirt – some of the cheers I got from strangers were great! The rest of the race is a blur as well. I remember being in so much pain and just wanting to finish. They announced my name crossing the finish line and I burst into tears. It is such a huge accomplishment for me. Training for this race helped me make other changes in my life.  I’ve lost 30 pounds making small changes in my diet.  And after getting out of a long-term relationship, I have tried to focus a lot of positive energy on myself. It has been quite the journey – all I can think is that all the pain was worth it. I’m going to take a short break and then continue training to run the Broad Street Run in Philadelphia (where I live). 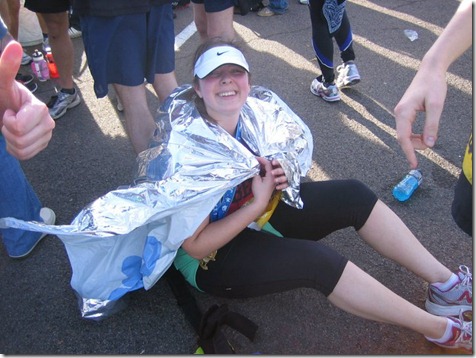 Any one else have any epic race stories to share?