Run For Your Cause 4.0 Mile Race Recap

I feel like I’ve finally truly settled into my new home of Charlotte – I had an absolutely AMAZING race!  I love the race atmosphere of this city!

Did I mention I smashed my goal by a full 2:09?!  Speedwork sessions REALLY do pay off!  And I actually had FUN pacing an average of 8:10 – it wasn’t tortuous.  It felt GREAT.  I was all smiles the entire time. 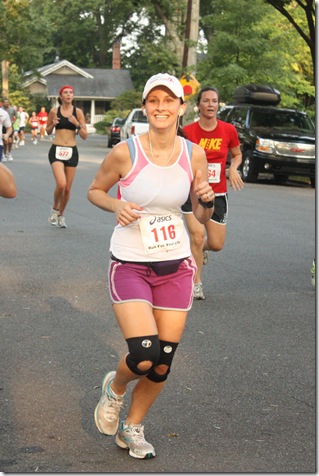 My race morning started off like every other – I jolted awake at 4:30 AM, mumbling, “DID I MISS THE RACE?”  Then I fell back asleep for another hour, woke up, and made breakfast.  I had 1/2 cup oatmeal with a banana,  maple syrup, and sunflower seeds.  Plus coffee! 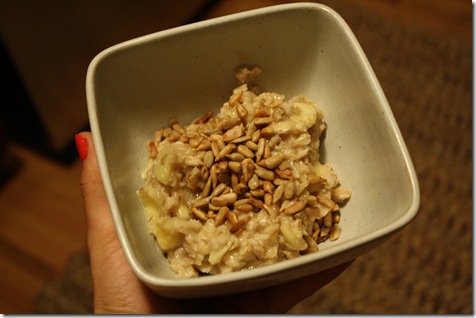 A big group of bloggers + friends met at my place, and then we drove over together.  I was REALLY excited to see the setup.  Orlando has absolutely amazing races that are well-organized and fun, so I was a little afraid that Charlotte would disappoint me.  However, everything was great!  There were tons of booths with food and drinks (and it was a small race!), the course was perfectly measured, the chip system was organized, and the route was well-planned and challenging.  What more could you ask for?

We arrived 20 minutes or so before the race.  That gave me a little bit of time to calm down, collect my thoughts, and hydrate.

All the girls taped Operation Beautiful signs to their backs.  Everyone got lots of smiles, waves, and high-fives throughout the race! 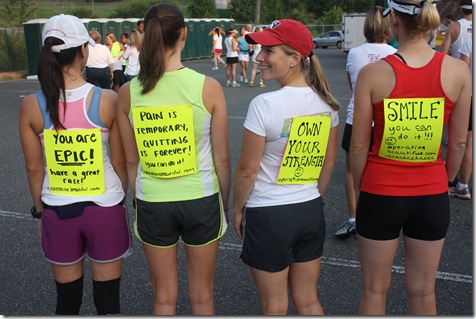 From left to right:  Jen, new friend Emma, Kath, Emily, and me!  Michelle and Kelly also did the race. 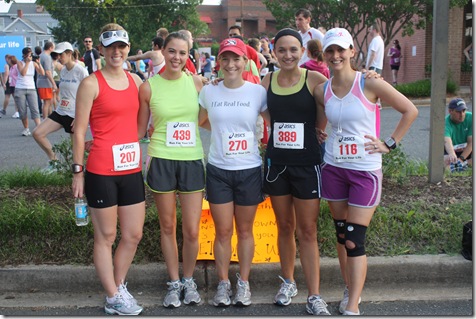 Before I knew it, it was time to line up at the start! 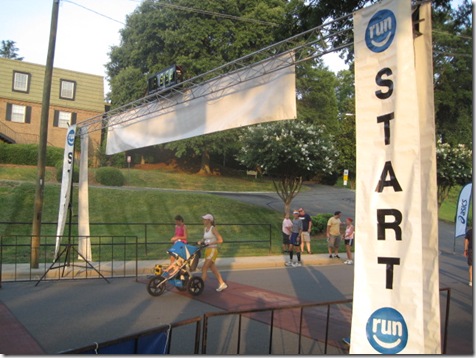 I always study the course map for the following potential traps:

After checking out the course map last week, I knew I needed to bring my own water bottle (there was only one water station at Mile 2.25 and I cannot go 4.0 miles with only a sip of water).  I also knew that there were going to be several larges hills that I had to be smart about.

The course started with rolling hills, but nothing too major to climb.  I tried to hold back a little bit and start off slower because I REALLY did not want to burn out.

I also made an effort to minimize weaving around slower people at the beginning.  I’ve noticed that weaving significantly slows my time and adds to my distance, and I just don’t think it’s worth it. 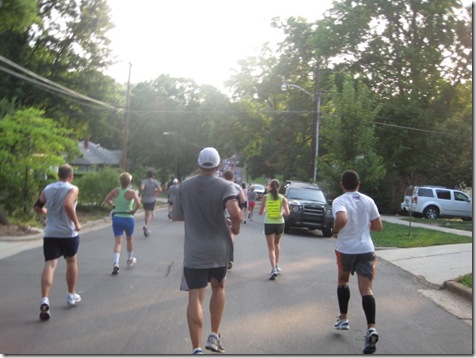 My Garmin beeped right as I came up on the official Mile 1.0 sign – I was so HAPPY (I HATE when courses are ‘long’ compared to my Garmin).  As we turned onto East Boulevard, we entered a downhill stretch that lasted for nearly an entire mile!  It was AWESOME.  I tried to ride the downhill out as much as possible without wearing myself thin.  I managed to run Mile 2.0 in 7:50. 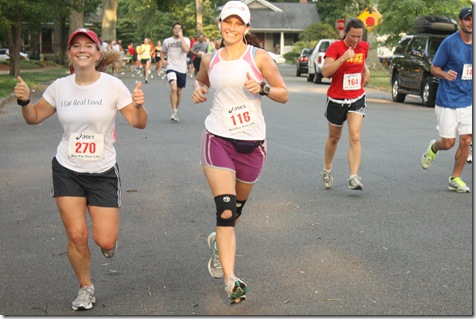 We came up on Diana and Matt shortly afterwards! 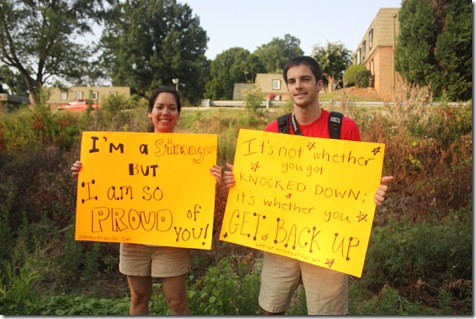 Kath and I ran together for about 0.75 miles, and then I decided to take a short walking break up another hill and let her get about 20 feet in front of me.  Running with friends (especially faster friends) during a race can really be my nemesis.  I’ve burnt out on many races (check out this 15K recap for a case in point) by trying to keep up with friends.  The race is really just against myself, after all!

Using Kath as a “rabbit” actually helped me a great deal because she motivated me to stay at a steady pace.

My tactic for the hills was simple:  climb them slowly, ride down as fast as possible, and then stay steady on the flat surfaces.  I was CONSTANTLY looking ahead to see if I was about to come up on a hill and adjusting my pace accordingly.  I actually really enjoyed running such a hilly course because it was tactical challenging – and they say running is boring! 🙂

Since I was basically already in sprint mode, I decided not to pick up my pace until I could actually SEE the finish line, even though I knew it was right around the corner. 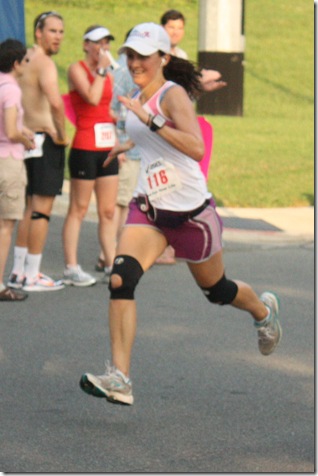 Kath was still only 15 feet ahead of me, but I didn’t think she knew I was on her heels.  I started to creep up on her and hoped to ambush her (in a friendly way, of course!).  She saw me just as began to pass and also started to sprint.  We crossed the finish line together, laughing and smiling! 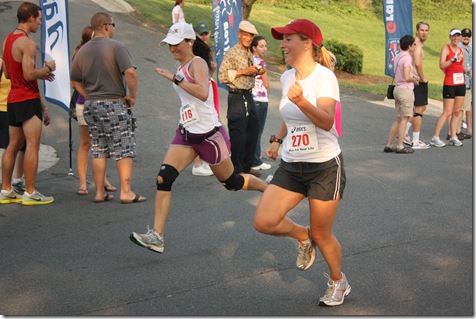 Here are my statistics!  I’m so proud of myself.  I ran a hard, smart race, and my speedwork training has DEFINITELY paid off.  This is the fastest race I’ve ever run (besides the local 5K that I won)!

Afterwards, we checked out our official times.  Another cheer for organized racing!  The stats were up in minutes. 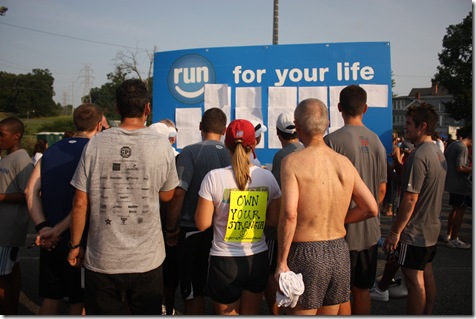 And I snagged some cinnachip bread from the Great Harvest tent! 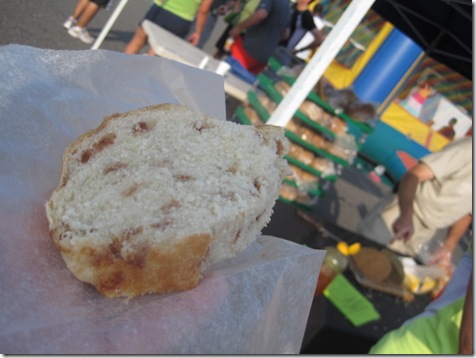 After the race, I invited everyone back to my house.  I set up our tailgate tent in the yard and we had a picnic. 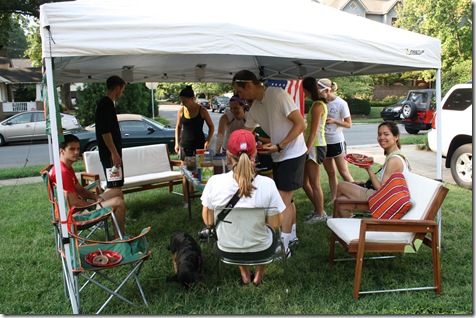 Everyone brought something to share.  This was the perfect breakfast #2 (#3?).  I had 1/2 a whole wheat bagel with PB and fruit.  I also tried a bite of Emily’s special quinoa breakfast bars. 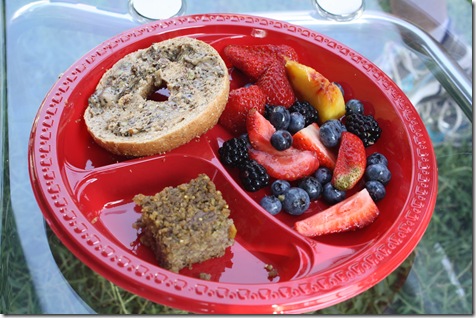 Maggie and James loved getting attention from everyone! They love sweaty runner hugs. 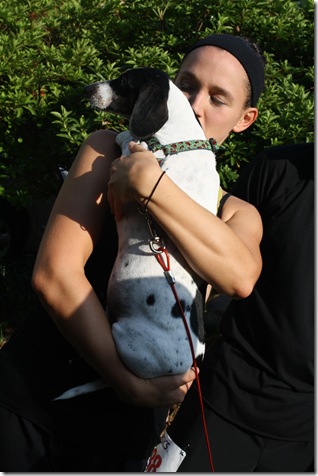