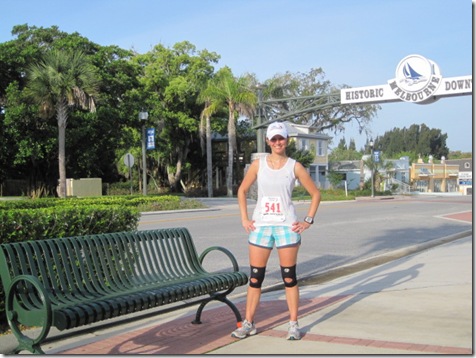 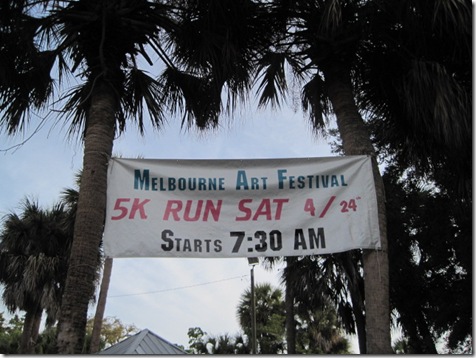 Unfortunately… I reached my goal ALONE!  Nick didn’t show up when he was suppose to, and I tried to call his cell, but it was turned off.  I paced around my living room for a while, freaked out on Twitter, and decided to wait an extra 10 minutes before leaving. 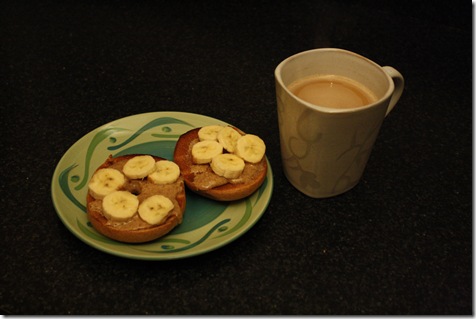 I got in the car and began to drive to the race start, which was an hour away.  40 minutes before the race began, my phone rang – it was Nick!  Turns out he accidentally slept through his alarm.  :(  I felt SO bad for him!  I’ve definitely made that mistake (and the AM vs PM mistake), and I’ve learned to always set at LEAST two alarms (last night I set THREE!).  Maybe we can do a 5K together next weekend instead?

I arrived at the race start a little later than I wanted to and had to rush, rush, rush to get my packet and number.  I lined up at the start as they were singing the national anthem. 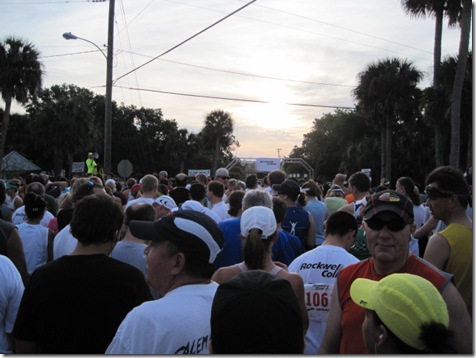 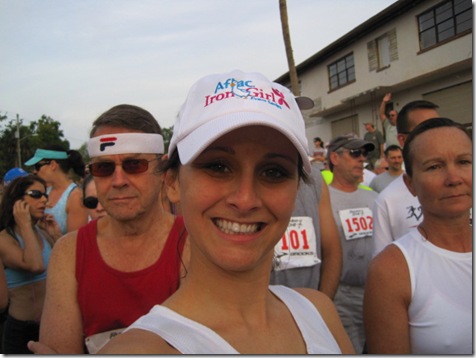 (That guy behind me has a SWEET sweatband!)

My 5K personal record is 23:46, which I set during the Dash of the Elves in December 2008 (race recap).  That race was very small (I actually WON the female division) and almost totally flat.  I knew it was going to be hard to PR at today’s race because it was crowded, and the course involved two 0.5 mile climbs up the Melbourne causeway.

But I was going to try!

The gun went off and I went off like a bat-outta-you-know-where.  I managed to get close to the front pretty quick and tried to book it as fast as possible before we hit the causeway.  We came up on the docks, and I knew the bridge was close! 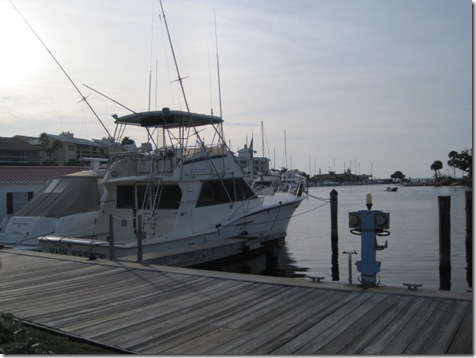 The causeway was a TERRIBLY long and intense climb.  It lasted 0.5 mile. 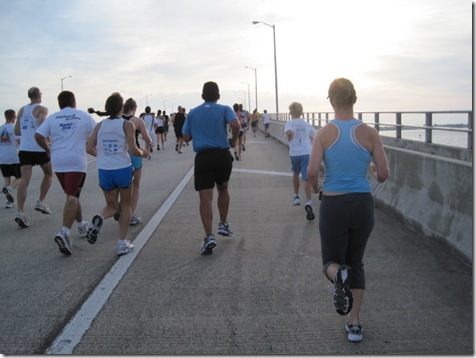 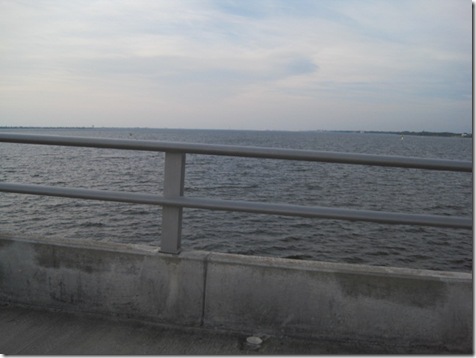 The Mile 1.0 Marker was at the very top of the causeway, and I hit it at 7:56.  My legs were at me, and I knew there was NO WAY I would be able to maintain that pace when I ran up the causeway in the opposite direction.

The next 0.5 mile was entirely downhill.  I tried to ride it out as much as I could, but it actually hurts to go fast on a slope.  My pace slowed to 9:00 as I watched the lead men whiz by me! 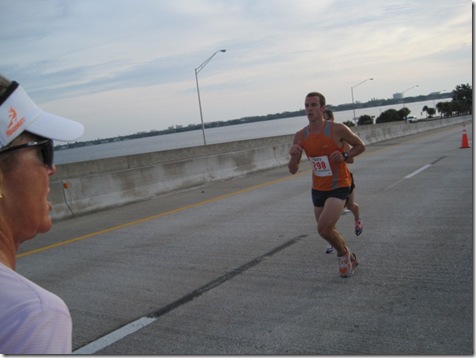 They were hauling bootay!

We hit the bottom of the causeway, ran another hundred meters or so, turned around, and headed back up the causeway. 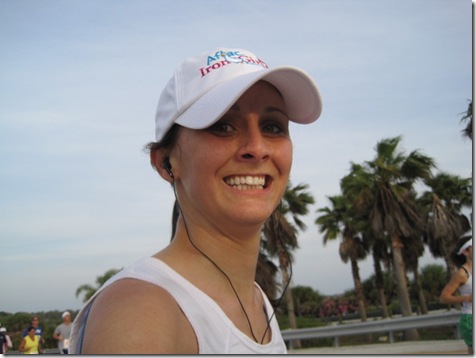 The second time around, I decided to slow my pace going up the bridge instead of tackling it.  I dropped to 9:30 as I climbed, but I didn’t mind because I was going as fast as I could without dying!

At this point, I looked at my watch and realized that a PR was unrealistic (which I was OK with given the 1.0 mile of climbing), so I readjusted my goals and decided to aim for under 26:00.

When I passed the Mile 3.0 marker, I started to run as fast as I could. 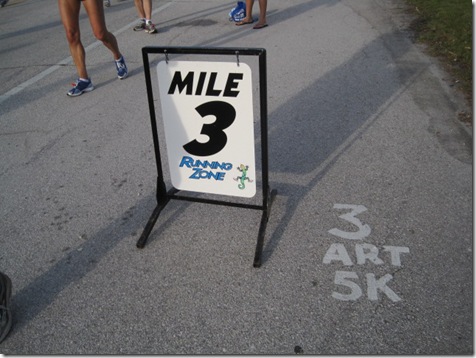 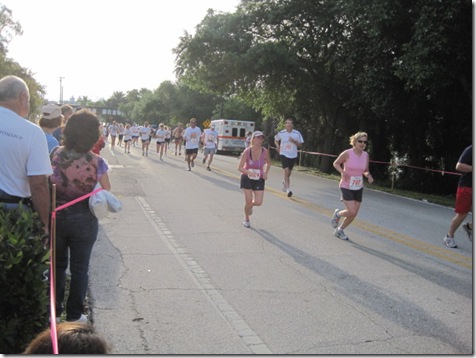 I was SUPER excited because I finished with 9 seconds to spare.  😉

I wandered over to the finisher’s area and noticed they were serving BEER! 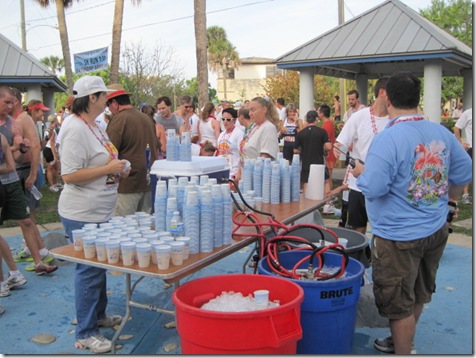 But decided to go for water instead.  🙂 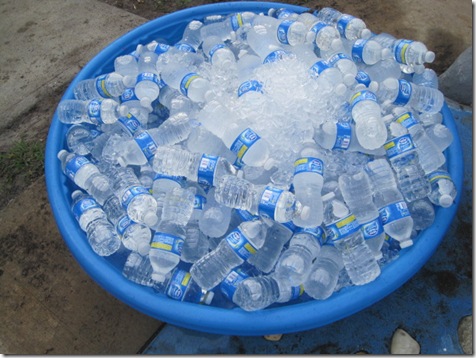 After my heart rate dropped back down to normal, I decided to explore the area a little bit by taking the long way back to my car.  My 100-mile bike race is just a month away; plus, I’m going clubbin’ tonight for my birthday, so tomorrow might end up being a rest day, if you know what I mean.  🙂 I extended my run another 3.0 miles as I explored the area. 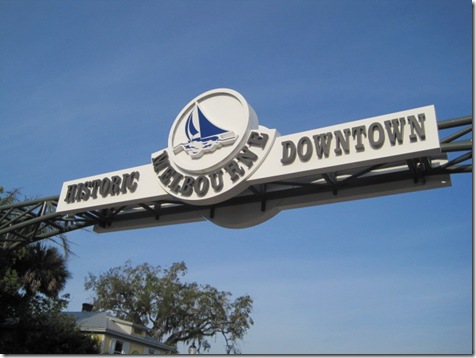 All the artists were setting up for the festival!  I love art festivals.  I had to stop and look at some of the pottery, jewelry, and paintings. 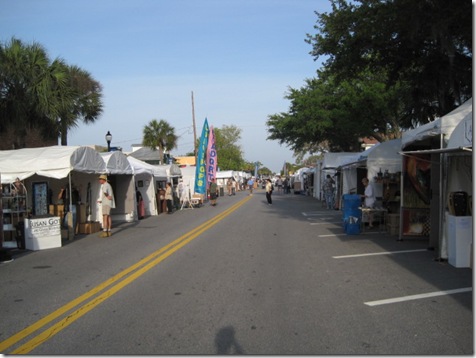 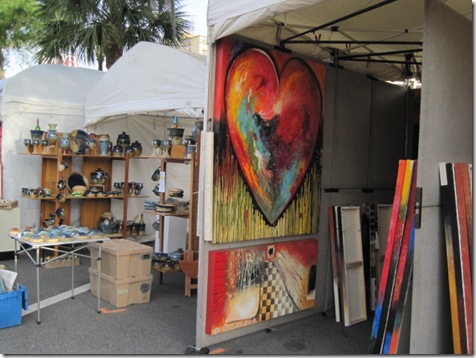 My stats for the post-race 3.0 miles:

Hahah – one of these splits is not like the other.

And then I got in the car, drove home, and made myself breakfast #2 (Pineapple Chobani, strawberries, and 1/2 a cup raw oatmeal). 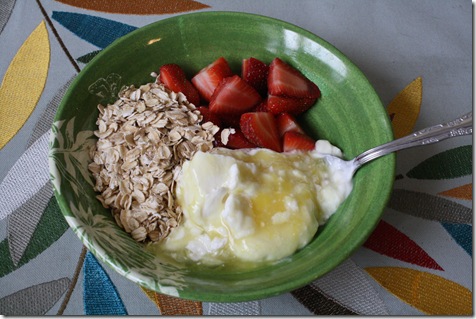 All in all, a very fun 5K!  I wish Nick had been there, too, but maybe we can do another one together next weekend.

As mentioned, we’re celebrating my birthday tonight (it’s on Monday).  I am still in the mindset of wanting to go to the clubs on my birthday (or maybe I’m just striving to recapture my younger days…) so I better rest up!

Do you have any large, overarching fitness goals?  I’d like to do a race in every state (I’ve raced in Florida and Pennsylvania, and the bike race will be in California).  That will be very hard to achieve, but doesn’t it sound fun?