James always sits on the rug separating the kitchen from the living room and snoozes while I cook breakfast. 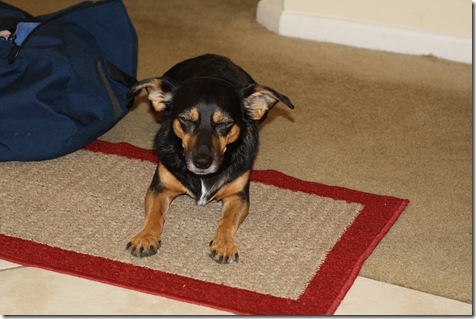 I made a savory breakfast today: 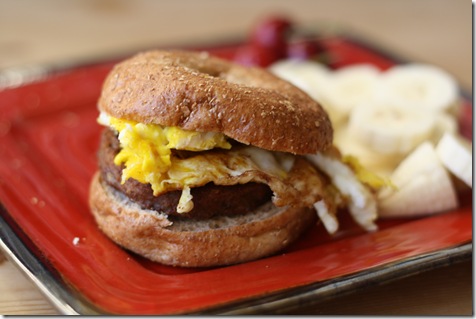 I hardly ever use “meat replacements,” but the Husband picked up a box of Morning Star “fake sausages’’ and DANG – they are delicious!

I had a mini whole wheat bagel with a fried egg and a fake sausage.  All I need was CHEESE, but I remembered too late. 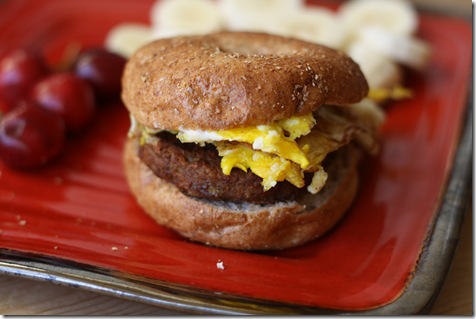 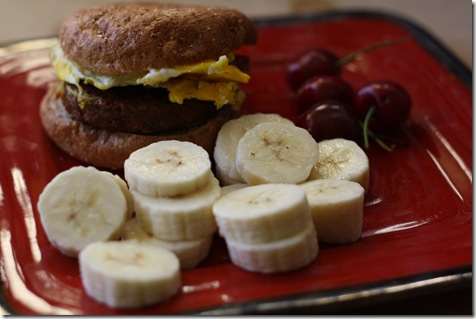 A few months ago, I ran an Operation Beautiful submissions contest.  I was looking for 125 wonderfully creative notes to include in my book (which will be published in August).  The winner of the contest, Sarah Sheppard, received a $100 Spa Finder gift certificate. 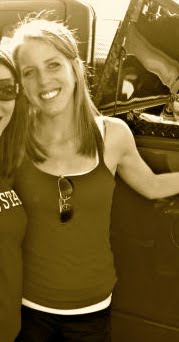 I can’t show you Sarah’s submission (because it is an exclusive for the book), but it was an awesome entry and definitely stood out from the 150 others I received.  It was clear that she deserved to win the contest and the spa gift card.

A few days ago, I received this e-mail from Sarah.  It really touched my heart, and I wanted to share it with you all.

For a while I contemplated getting a nice haircut or a facial, but could never make up my mind. Recently, some events have occurred in my life that have put everything into perspective and I think I’ve finally figured out what I’m going to do with that gift card.

On December 15th, the day I came home from NC State for the last time (I’ve transferred to JMU back home in Virginia), I had expectations for a long, relaxing, peaceful winter break. Those plans quickly turned to dust when, shortly after I pulled into the driveway, my mom sat me down and told me that 5 days prior, my dad had been diagnosed with cancer. From that moment on, the world became one big roller coaster and we have experienced every single twist, turn, up, and down with full force. On December 24nd, Christmas Eve, they finally had a definitive diagnosis for my dad of metastatic (aka rapidly spreading) lung, kidney, and bone cancer, and he’s been given roughly three to six months to live. I’ve been angry, sad, and confused, but for the most part we’ve forced ourselves to look past those negative feelings and focus on the positives as a family. We have no time to waste, and spending these last months angry equates to wasting in my mind. Once my daddy has passed we will have plenty of time to mourn and mope and be sad, but I want these final memories to be filled with smiles and laughter, not tears and frustration, you know?

If I rewind a little bit back to November 10th, my grandma (mom’s mom) passed away at the age of 94. She’d been slowly and peacefully dwindling for a while, but managed to hold on until the day of what would have been hers and my grandpa’s 67th wedding anniversary. We thought we were prepared for her passing, but you’re never really prepared. As expected, my mom was very upset to see her finally go but at peace with the fact that she was able to spend the anniversary reunited with her husband in heaven.

Exactly one month later, after not nearly enough time to recuperate and get back into the swing of things with work and life in general, my mom was smacked in the face with another tragedy in the form of the love of her life’s diagnosis with terminal cancer.

As hard as this winter has been for my family and I, it’s been a real eye-opening experience. I’ve always been an optimist and seen the "half-full" view of the world, but now I have learned even more to stop sweating the small things. Every day is a new day and a new twist on the roller coaster, but we’re dealing with what we’ve been dealt and staying as positive as we can.

So, as far as the gift card goes, I cannot think of anything else but to surprise my mom with a fabulous massage. She needs it and deserves it. I have no idea what it’s like to lose a mother (and I don’t want to know for a very long time) AND find out your husband has a terminal illness all within a month’s time frame. She is my absolute best friend, my rock, my idol, and my hero. I don’t know how she’s done it thus far and I don’t know how she will do it in the coming months, but I have absolute faith that she… no, that WE will make it through.