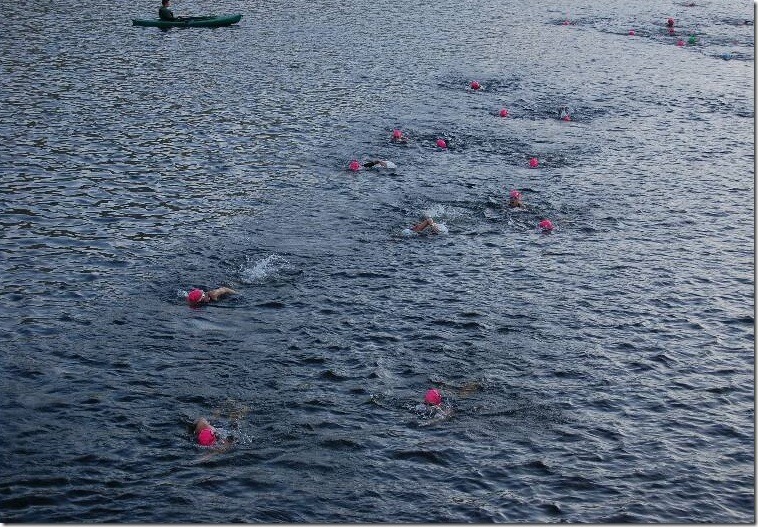 I originally did Lake Logan International back in 2011.  At the time, it was one of my strongest triathlons to date, and I was in love with the course.  It’s a truly beautiful triathlon in the Pisgah National Forest, and since it’s in a valley in the mountains, the weather for the race is always cool.  I always said I wanted to go back and do Lake Logan again, but life got in the way until now! 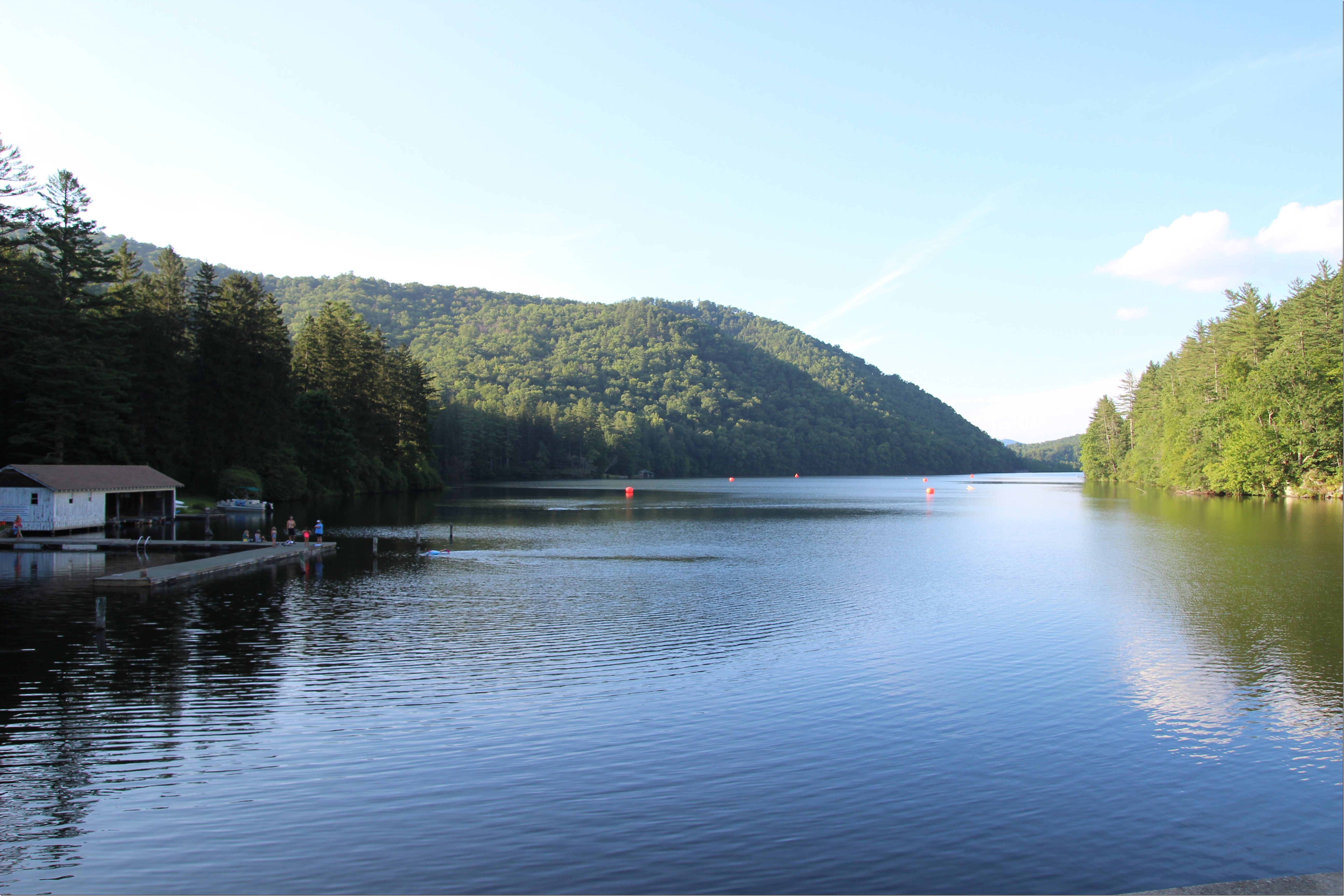 I was nervous in the weeks leading up to the race.  As I wrote before, I felt like I hadn’t trained hard enough, especially when it comes to the bike.  But as race day approached, I started to calm down and feel pretty darn excited.  By the time Brandi and I started to lay out our gear in the hotel room on Saturday night, I was downright giddy! 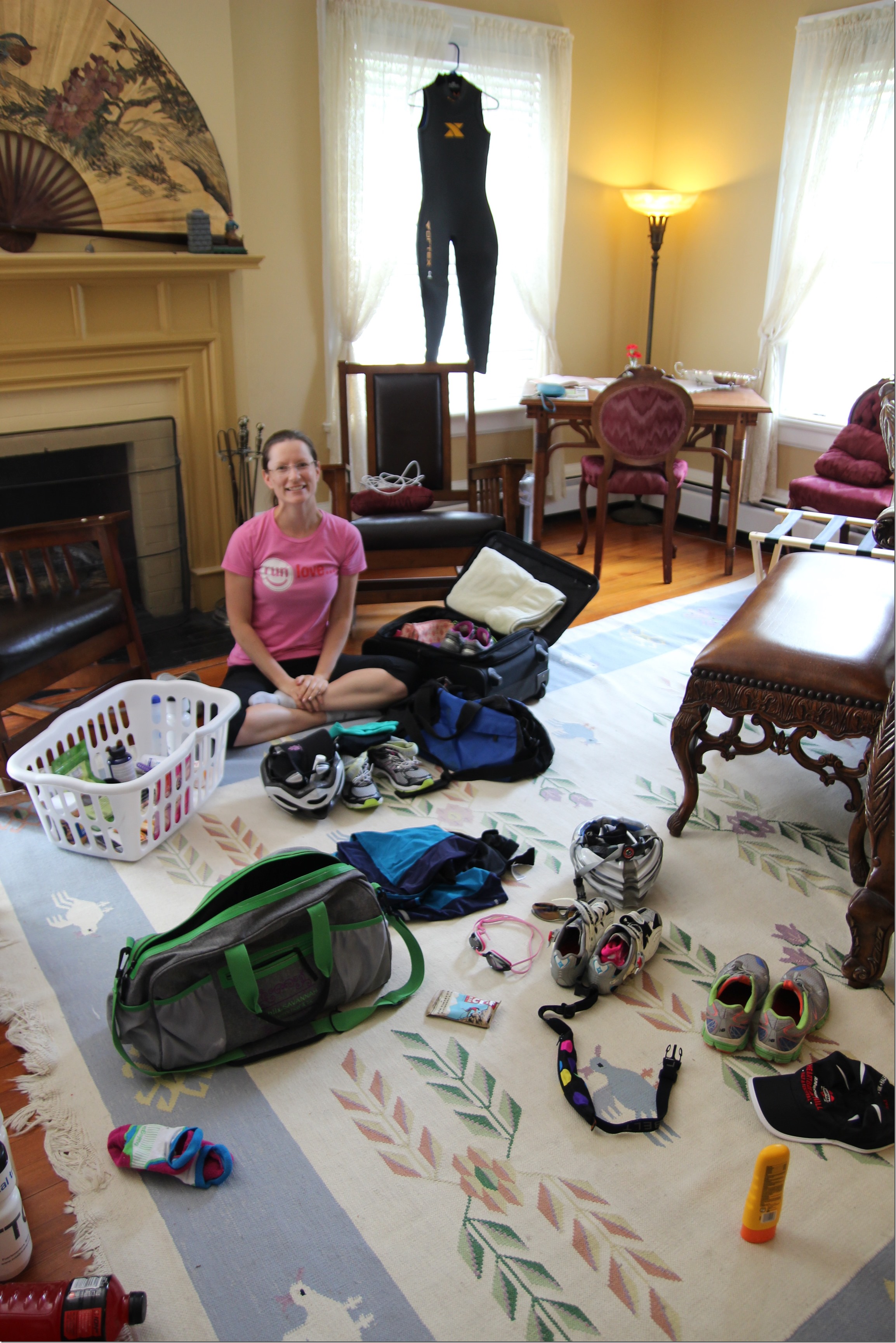 This was Brandi’s longest triathlon ever (she’s done a lot of sprints) so we decided to go to the course on Saturday night for the optional race meeting so we could scope things out and calm any last-minute nerves.  At the race site, I met up with my buddy Megan from Orlando!  If you’ve been reading for a while, you may remember Megan.  She lives in DC now.  I was so pumped to see her.  This was also Megan’s longest triathlon, but she’s in the process of training for Ironman 70.3 in Miami. 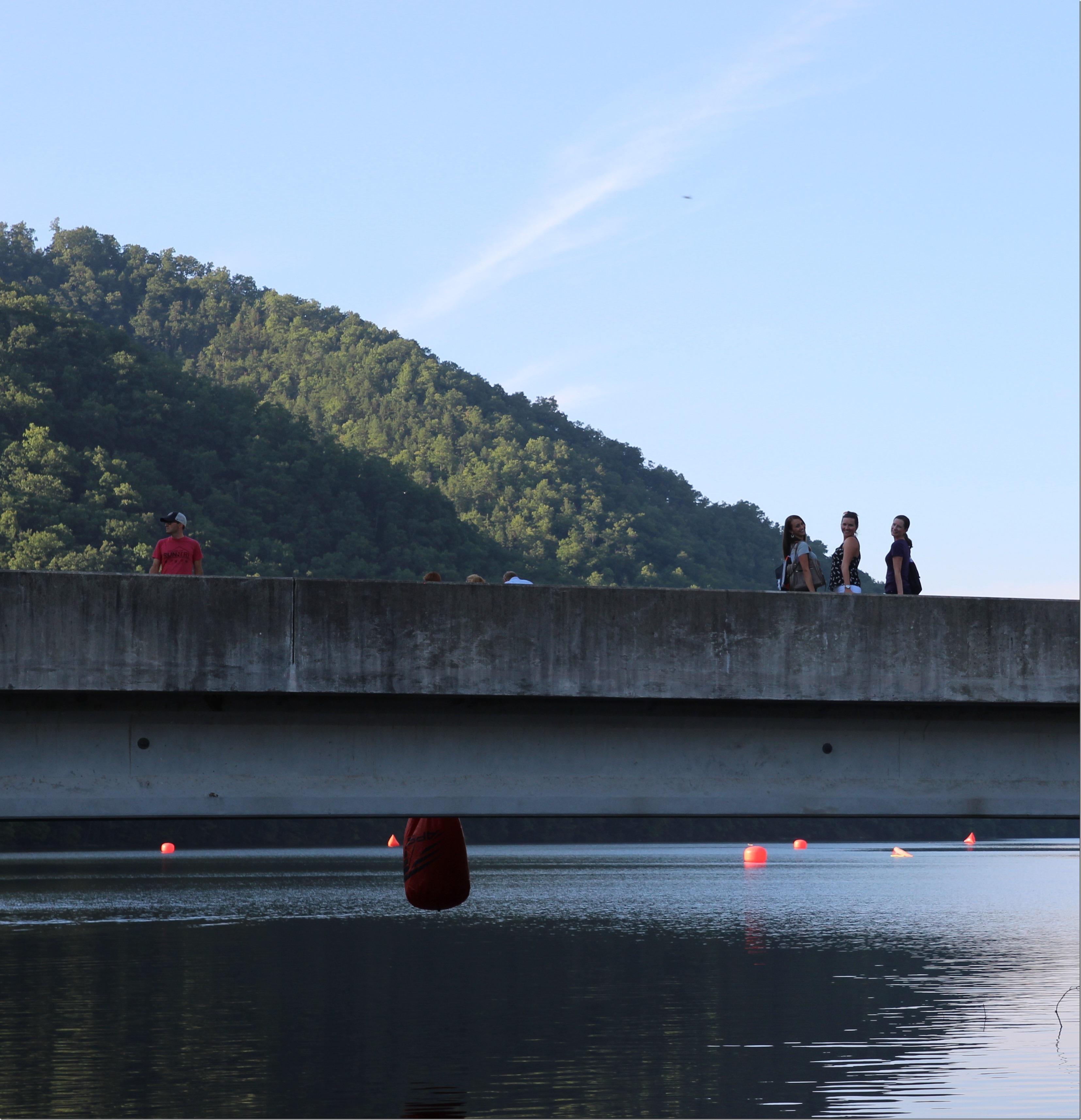 I REALLY lucked out with the BEST TRANSITION SPOT humanely possible.  Seriously – my rack spot was on the outside of the first lane, right next to the bike in and bike out.  Wahoo!  After familiarizing ourselves with transition, we headed back to our B&B and got in bed by 8:45.  We had an early wake-up call! 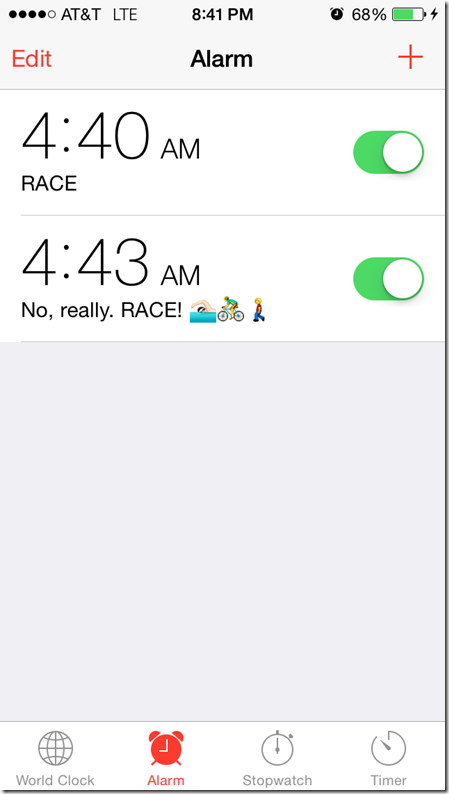 When my alarm went off, I rolled out of bed, put on my clothes, and was ready to go.  Out the door in 8 minutes – no joke!

We drove to the race start in the dark, and just as the sun started to come up, we got our chips, got body marked, and set up transition. 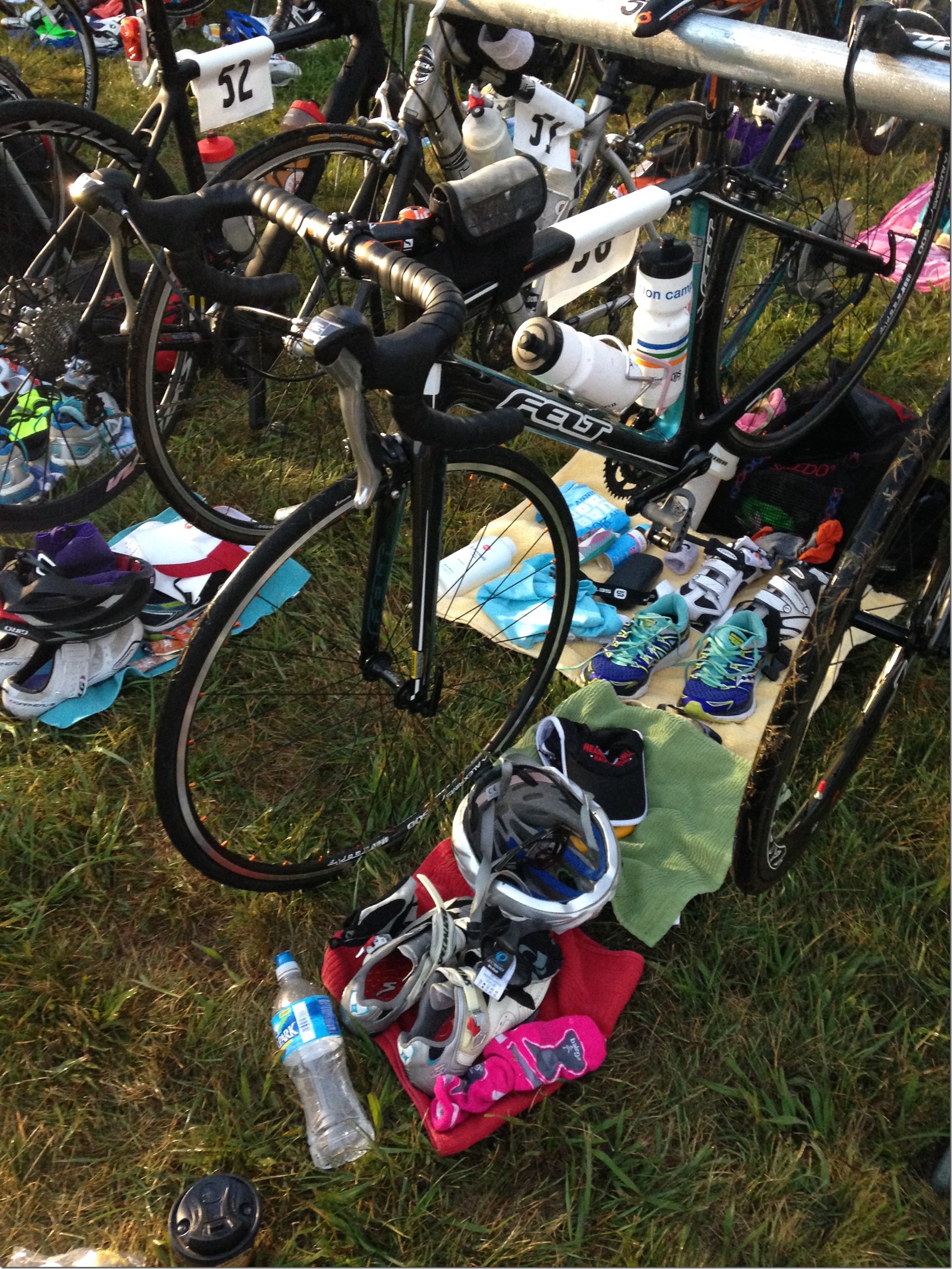 So – funny story.  I belong to an awesome triathlon Facebook group called Tri-Fecta.  One day, someone alerted me to the fact that, in the group, a person had posted a transition meme of the “You’re doing it wrong” variety.  The meme was a picture of me sitting down in transition and tying my shoes!  Although being turned into a meme for your shitty transitions is NOT what a triathlete aspires to, I actually found it pretty funny (hey, this is an accepted risk of blogging, right?).  But I will admit that being turned into a meme for my crap transitions has made me reeeally want to be better at transitions (and with some effort, I have definitely improved).

Thus, my goals for this race were:

Not to suck at transitions!

Swim strong but steady. No rushing.

Bike slow.  Just survive it because I wasn’t trained for 24 miles.

Run balls to the wall, as fast as I could. 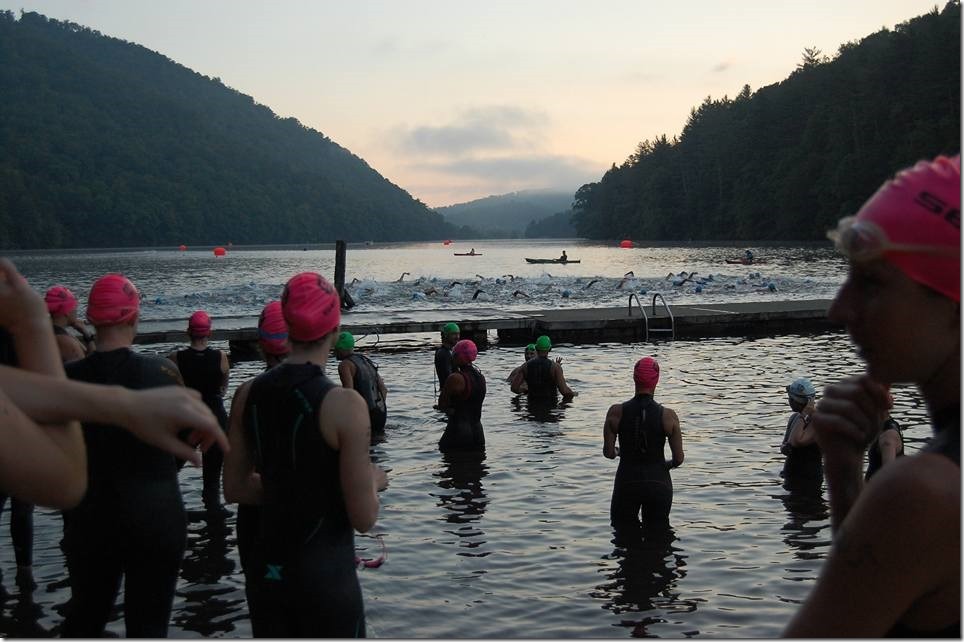 Before I knew it, it was time to start!

SWIM:  I was really glad that I wore a wetsuit for this race. I did not wear a wetsuit in 2011 because wetsuits made me panicky back then, but now, I am more comfortable than ever in open water.  My plan of attack for the swim was, like I said, to go steady and not rush myself.  I focused on getting into a groove and concentrated on keeping great form.  Before I knew it, I was passing under the bridge and approaching the deck, which I pulled myself onto and ran into transition.

BIKE: I did a pretty good job of transitioning quickly and getting onto the bike.  The course was rolling hills save for a big steep hill at the beginning and end. I was passed by a million people (okay, maybe 40?), but that’s pretty typically for me on ANY triathlon, let alone one that I am undertrained on the bike.  The bike course is BEAUTIFUL (lots of farms and animals).  I tried to just focus on being happy to be on my bike and not worry about my pace. 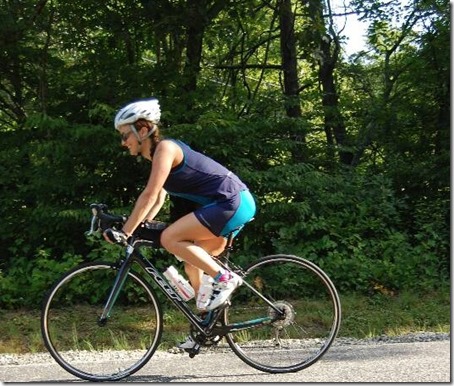 However, the entire time I was on the bike, I wondered where Megan and Brandi were – I knew that I had exited the swim before them, but both are WAY faster than me on the bike normally, so I expected them to catch and pass me.  When neither did, I got a little worried!

RUN:  T2 was super fast.  As I exited transition, I ran by Brandi and Megan coming in – turns out they were just a few minutes behind me.  Now, the run course at Lake Logan is super hard.  The first 5K is straight uphill, which can be pretty demoralizing if you don’t know it’s coming.  I remembered this from 2011 so it was no biggie.  I knew that I’d had 3.1 miles of downhill to make up for the energy I lost going up, and I put the pedal to the metal and began to pass, pass, pass people. 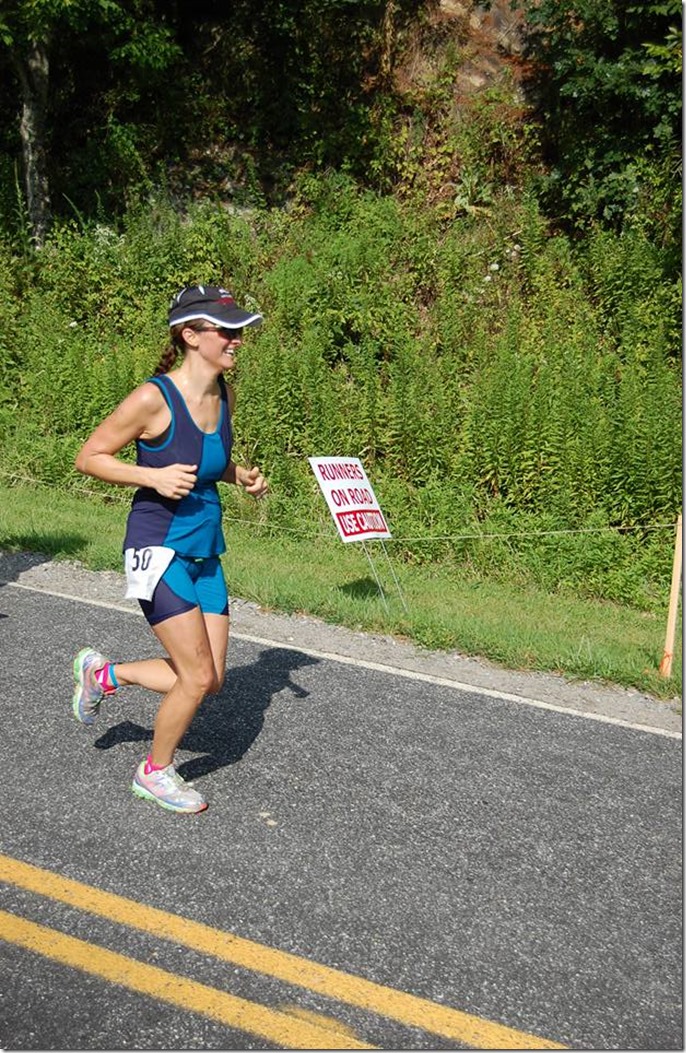 I passed a whopping THIRTY SIX PEOPLE on the run (yes, I counted).  Those were all people who probably crushed me on the bike, so that felt pretty good!  Hah.  I tried to turn my mind off as much as possible and just give into the physical discomfort.  I have realized that this is my favorite part of a hard race – getting myself to the edge of my abilities and staying there.  Maybe that sounds weird, but I think that’s why I get such a rush when I finally cross the finish line.

Just to compare, here’s 2011 result.  The upshot is that I was about 5 minutes faster this year because I was way faster in the swim (probably helped a bit by that wetsuit) and a lot slower on the bike. 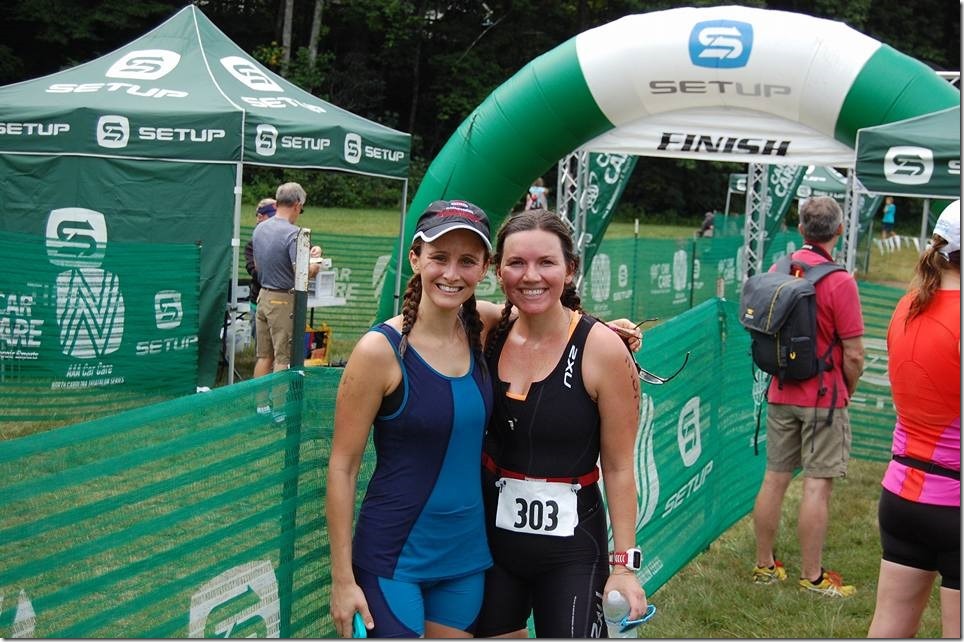 My trisuit is C/O MooMotion and is super comfy.  Highly recommend!

I was the first of my friends to cross, but Megan was shortly behind me (and won the female novice division!) and Brandi right behind her.  Everyone was *super* pleased with their results, which is always fun!  We were all immediately talking about doing the race again next year…

Oh, and I got to meet my blog friend Adrienne, who totally killed it.  She is tall and I am short, so we tried to come down and up to each other’s levels for this picture.  Hah! 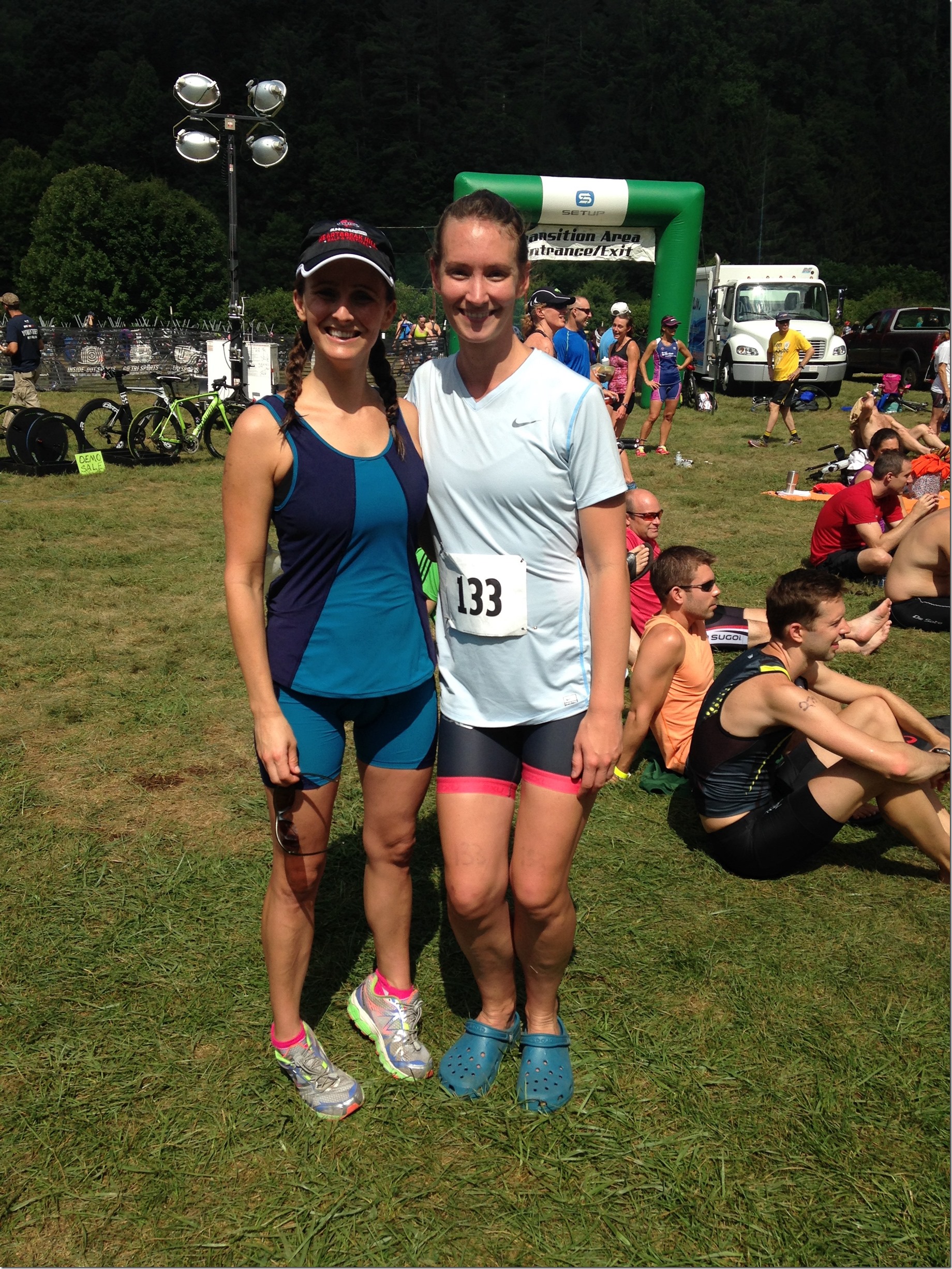 And I have to say that I am pretty thrilled that I overall improved my pre-babies, mid-twenties time from 2011.  I *know* it’s not true, but it is easy to fall into the trap of thinking that your physical abilities to go crap as you get older and when you have kiddos, especially while they are young.  This race reminded me that it’s very important for me to make the mental and logistical space for my favorite activity because I really, really love racing.