I’ve gotten a ton of parenting-related questions lately, so I figured I’d put the answers all in one post.  Enjoy! 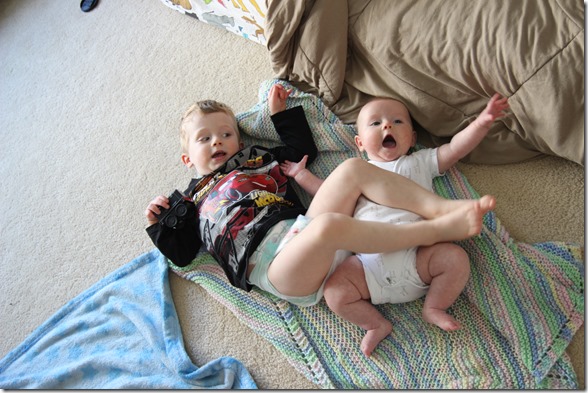 At 3 months, Claire goes to bed around 7:30, although actually falling asleep usually takes some time.  She normally wakes up and requires comforting about 2 – 3 times before she’s actually out at 8:30 or 9.  I dream feed her at 10 PM, and then she wakes up typically once in the middle of the night to eat.  She wakes again at 6 to snack, and then I can usually get her to go back to sleep for another hour or two, which is nice because I either 1) continue sleeping; 2) get  up and work; or 3) get up and hang out with Henry alone.

I think some kids are just naturally better sleepers than others.  They want to sleep more, they wake up less, they eat more during the day, etc.  But I also think I’ve done a few things differently with Claire that helped a lot:  from the start, we swaddled (I like this swaddle as well as this warmer option), dream fed, used a pacifier, and used the swing when necessary.  I was afraid to do these things with Henry because I didn’t want to create sleep dependencies, but she doesn’t seem to be dependent on any of these things now (she’ll sleep with arms out of the swaddle or let the pacifier fall out).  When she didn’t need the swing, I put her in her crib or bassinet (and now, we never use the swing).  Beyond the initial first few weeks, I tried put her to sleep in her swing or crib instead of letting her sleep on me.  I also put her down for naps a lot – she is just now staying awake for longer than 1:00 – 1:30 hours at a time.  She naps 4 or 5 times a day!  Sleep begets sleep, after all.  Re-reading Healthy Sleep Habits, Happy Child helped us a lot.

Also, I regularly let her fuss in her crib longer than Henry EVER fussed before I sleep trained her.  Some of this is just practical – I can’t always jump up to rescue Claire from her crib; sometimes it takes me 5 minutes to get to her because I’m supervising Henry in the bathtub or whatever.  But some of it is also that I think my biggest mistake with Henry was that I always rescued him whenever he made a peep.  I trained him to expect to be picked up the moment he woke up (even if I had just fed him a full bottle at 3 AM and had merely startled himself awake).  50% of the time, she fusses and cannot work herself back down – this is normal.  But the other 50% of the time, she fusses for a few moments and puts herself back to sleep.  I plan to sleep train her at 5 months (I CANNOT WAIT!) and know this is good practice for her.  I wrote extensively about Henry’s sleep patterns and eventual training (here and here). I know sleep training is not for every parent or kid, but it really worked for us.

Everything I read said that infants need predictable naps but that seems SO hard when you have a toddler. I was so good about having my infant home for naps when he was little but with #2 coming soon, I don’t know how that is possible. How do you create good sleep habits but not get chained to your house?

I just try to get her in her crib/bassinet whenever possible. For both Henry and Claire, it seemed like the act of sleeping was more important than where they were sleeping.  Sleep above all else, right?  Again – sleep begets sleep.  I’d rather have her nap in the carseat than not nap at all.  Right now, we are usually at home for her first nap; second nap is in the car/stroller; third nap is at home because Henry is eating lunch, having quiet time, or watching TV; fourth nap is usually on-the-go as well, but sometimes it’s not.  Fourth nap is always the hardest, right? 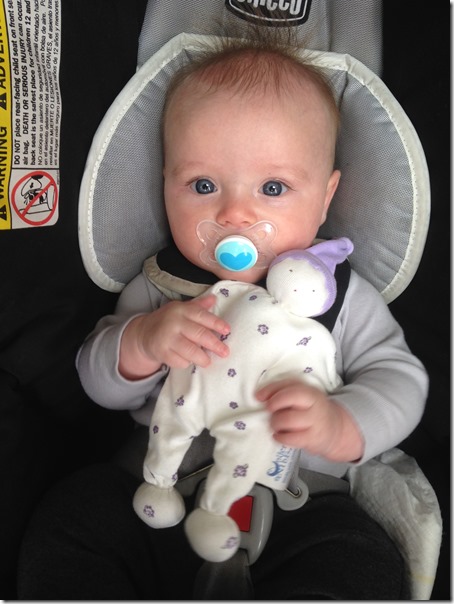 A lot of having two kids seems to be about doing the best you can.  It’s hard to juggle her sleep needs with Henry’s need for play and exploration, so I’m okay with on-the-go naps. I just try to make up for them when we’re at home. Regarding pumping, if you pump milk, too, here’s a handy chart that lets you know how long it can sit out – I usually just toss a back up bottle in my bag without worrying about keeping it cold (and then heating it up). Sometimes I pump in the car with an adaptor that plugs into the lighter; I wish I could recommend ours because it rocks but I don’t know what brand it is.

What’s Henry’s sleep like these days? Does he nap?

Nope.  Man, I miss toddler naps a lot.  He naps about 2 times a week, but I still make him do 45 minutes to an hour of quiet time in his room every day so he can decompress by himself.  On the days he doesn’t nap, he sleeps from 7 PM – 6:30 AM.

Why is Henry still in diapers? Are you going to potty train him soon?

Maybe.  I’m letting Henry (who is 2 years and 9 months) take the lead on this.  He shows lots of signs of readiness and will go on the potty about once or twice a day, but he hasn’t expressed true interest in going cold turkey with underwear. I want it to be his decision, so I’m waiting for him to let me know.

How was Henry’s preschool adjustment? Any tips?

It didn’t go as well as I thought. Henry is super social and loves people, so I thought he would adore daycare (he goes three times a week for half days).  It took him a long time to warm up and there were a LOT of tears (and sometimes, there still are).  Things that helped: When I drop him off, I basically drop him and turn on my heel and bolt.  Lingering makes the tears a lot worse.  When my mom was here for Claire’s birth, she really got Henry into a few other boys in his class. She learned their names and would talk about them a lot and basically motivated Henry to make the boys his BFFs.  He really likes having close friends in the classroom, so I think talking up that aspect of it helped, too.

Well, I’m pumping again <—an explanation of last time.  I pump all her daytime bottles + first nighttime bottle but breastfeed her in the morning and randomly throughout the day.  I still have to use a shield because she struggles to latch onto my flat nipples (TMI, sorry), so that’s part of why I went back to pumping.  But also… I just prefer pumping.  Which I can’t even believe that I’m saying because I hated it so much last time.  I pump really fast, so it’s just easier for me than messing with breastfeeding.  I don’t seem to despise pumping as much this time around, mostly because 1) I knew what I was getting into and 2) I have a breastfeeding quit date in my mind already.  Knowing that I’m okay with introducing formula, like I eventually did with Henry, takes the pressure off big-time.

Everyone always wants to know what the kids do when I pump – Claire sits in a bouncy seat and Henry and I talk to her and entertain her. Sometimes I feed her a bottle while I pump. Henry usually chats with us, plays nearby, or watches TV. And never doubt the power of a well-timed snack!

Where are Claire’s booties from? 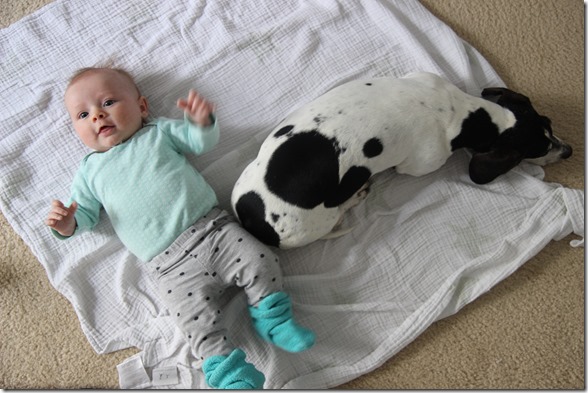 Hah, this is seriously my #1 asked question.  Her booties are the Zutano booties – they are so cute and way better than socks.

Remember that orange hat that Henry wore all last summer? Where is it from? 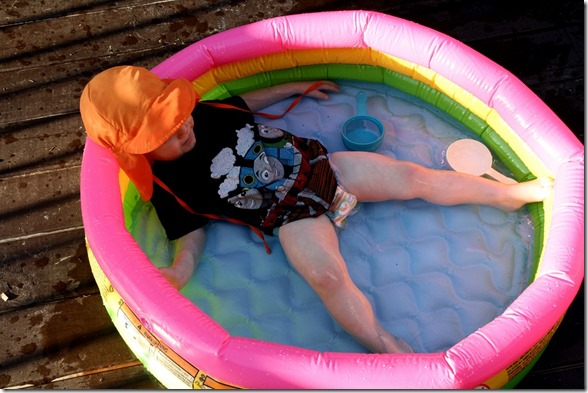 It’s the iPlay Flap Sun Hat.  It is awesome and I already bought it in a bigger size for him to wear this summer, too!

What pregnancy books and baby books would you recommend? 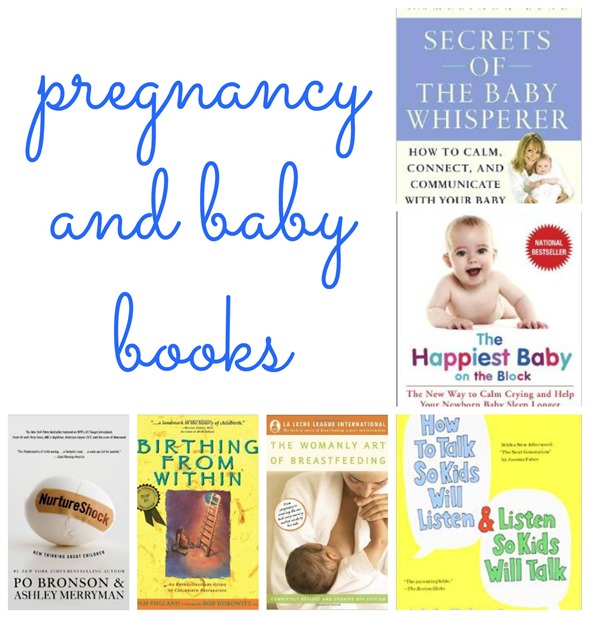 Happiest Baby on the Block

The Womanly Art of Breastfeeding

You asked this all the time when you were pregnant, so I’d love to know what you think now.  What’s harder, going from no kids to 1 kid or 1 kid to 2 kids?

Definitely 0 to 1.  That’s when the lifestyle shift occurs – your time is not always your own, your sleep is disrupted, and you have to figure out how to parent a baby. HUGE learning curve, often very stressful.  I found #2 to be so much easier because I already knew what I was doing, knew what I was getting (all the great parts of having a baby), and knew what I just to power through and survive (all the not-so-great parts that eventually pass).

How do you find time to workout with kids and your job?

Well, remember that I’m a work-from-home mom that works about 15 hours a week, so I have wiggle room in my schedule.  I workout either when Henry is in school and put Claire in childcare at the gym OR I put both kids in.  If you work full-time, it’s definitely more challenging to make it work.  We had a discussion about this on the HTP Facebook page, as well as at the bottom of this post.

Do you let Henry watch TV?

I didn’t let him watch TV for a long time, but now I don’t think we could survive without it.  I really, really need that break during the day (especially now that he’s not napping) to work, clean, or cook (or just decompress).  I actually think the shows that he watches are pretty cool – he’s super into Octonauts and has learned SO MUCH about sea life from it.  I don’t let him watch commercials, and I moderate what he watches (no shows with annoying child characters or hitting, which is in a lot more children’s programming than you’d think).  His screen time is limited to the TV; he doesn’t use a tablet because I want him to think of TV as a special thing that we go into the TV room for, not something available in the car etc.

What monitor do you have?

This one – love it!  We have two cameras so we can toggle back and forth between the kiddos.

What toys are Henry into right now? 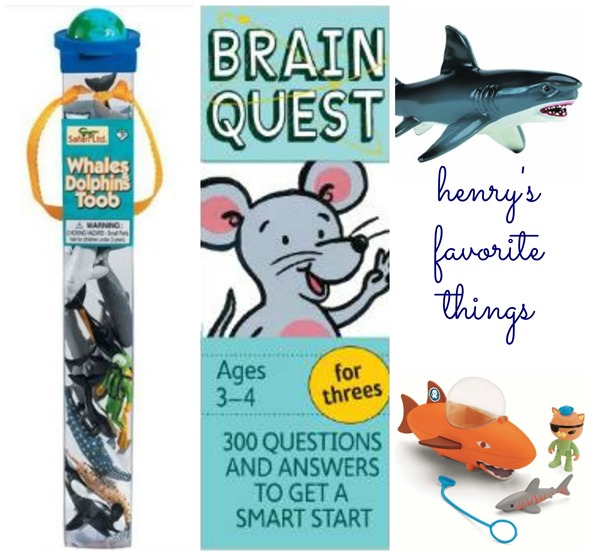 Where’s Waldo <— great sitting on the potty or car book

Brain Quest <— so much fun to play together!

Next post: How Long Does It Take To See Results?