One thing I’ve noticed about Round 2 – we use a lot less stuff.  Maybe Claire is just an ‘easier’ baby (true) or maybe we’re just more low-maintenance in general (definitely true, too).  But there are some things that I can’t imagine getting through each day without.  Here’s a list of the gear we love! 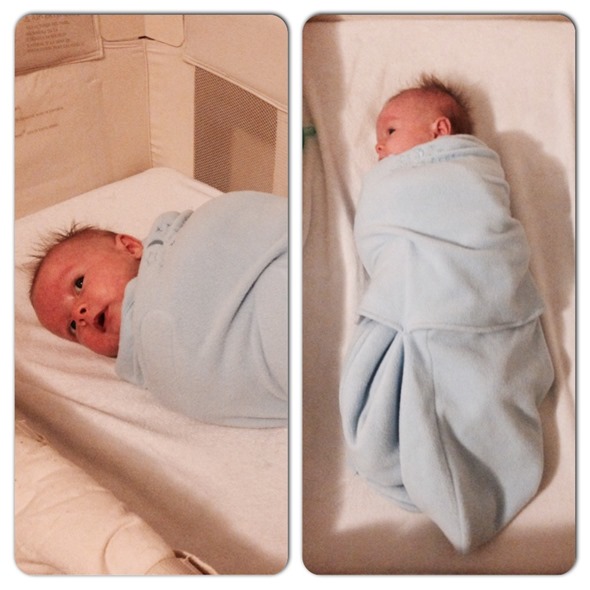 I refused to consistently swaddle Henry because I didn’t want to make him “dependent” on it.  This time around, I feel like, “SCREW IT. I AM WILLING TO DO WHATEVER WORKS.” Guess who’s been sleeping better?  Yup.  Me (and Claire!).  I was using light, cotton swaddles, but MomHTP suggested I try to find a fleece one.  I love this swaddle because it’s super comfy-cozy and doesn’t seem so “trappy” – just snug.  Also, it’s a sleep sack as well, so you can unzip it from the bottom and change a diaper without unswaddling the baby.  The first time I put Claire in it, she slept 8 hours straight but has since done a bunch of 4 and 5 hour stretches.

I started off with a bassinet that a friend loaned me but soon switched to the Arm’s Reach Co-Sleeper.  This thing is amazing.  You can “roll” down one of the sides so there is only a small wall between your bed and the baby’s, which means you can look in at the baby without sitting up (score!) and keep your hand on the baby’s chest without having to awkwardly drape your arm over a high side.  Also, I think that, because there’s no big bassinet wall between you and the baby, the baby sleeps better – she can see you instead of just looking at a wall, and she can hear you better, too.  It feels like you’re in the same bed without being in the same bed (which, personally, make me nervous, and I don’t sleep well).  Also – the mattress on this is significantly thicker than the bassinets I’ve used, which I think helps sleep, too.

Same one that I used last time – I still love it.  It’s a great pump.  It’s fast, efficient, and I haven’t had any problems with it over 8 months of exclusive pumping with Henry and daily pumping with Claire.

Actually, I owe you all a breastfeeding post because I know some people are interested.  Basically, things are going better than they did with Henry. I do a combo of breastfeeding (usually in the mornings and during nighttime wake-ups) and bottles (during the day when we’re out). It’s a combo that works well for me.  My master plan is to pump off an extra bottle every day and will probably stop breastfeeding Claire around the same time I did Henry (I’m thinking six to eight months is when I’ll hit my limit) and then wean her, switch to frozen milk, and then transition her to formula after my frozen supply runs out.  I’m  comfortable with this plan – and that makes me happy because the entire Henry feeding saga made me very unhappy. 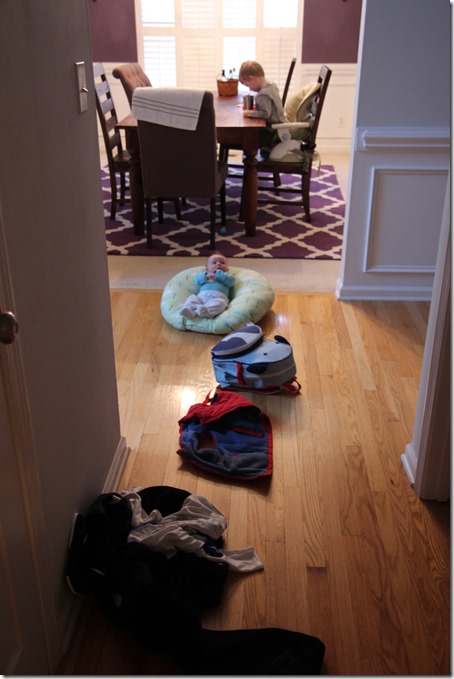 The Boppy lounger was one of my favorite products with Henry, and I love it for Claire, too.  I ended up buying a second one (one for upstairs and downstairs) and it’s worth every penny.  It’s super clutch when you need to put the baby down somewhere (like when you’re getting dressed in the middle of the hallway before driving your toddler to school, as in the pic above!). 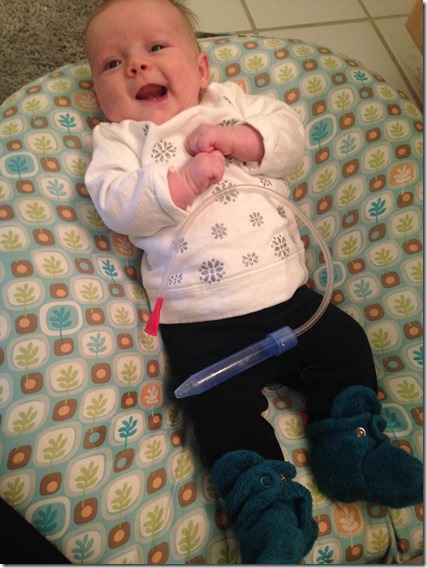 This is one of those weird parenting tools that you can’t imagine you’ll need and then can’t imagine living without. Claire gets a lot of boogers (I think because of the heater being on all the time), and this gadget (plus some saline spray) makes removing them super easy.

I’m sure there are tons of great swings on the market, but I still really like our old one.  Mostly because you can rotate it three ways so the baby can be swung in different directions.  Swings are a LIFESAVER.  Again, I am less worried about making Claire “dependent” on sleep aids as I was Henry (I just want to effing sleep!), so we use freely the swing for calming, falling asleep, and some naps.  With two kids, it’s especially useful – like having two hands! 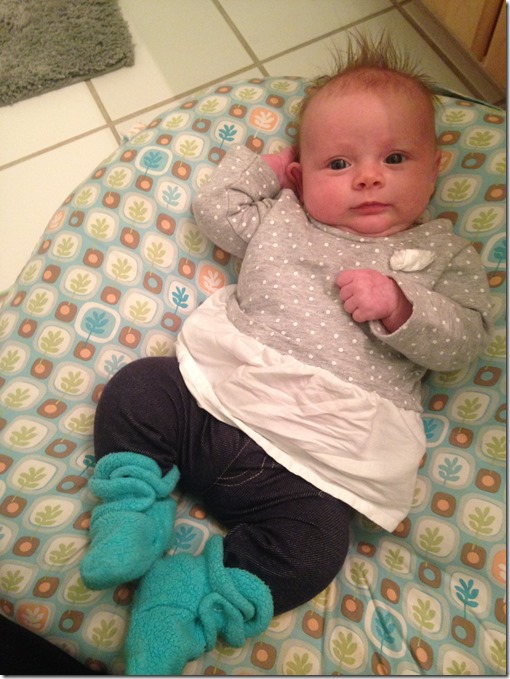 Another thing we loved with Henry and love for Claire.  In fact, I bought her another pair so she has her brother’s old ones and some newbies.  These booties are SO great because, unlike baby socks, they do not fall off.  Ever.  She wears hers every single day.  (Side note: they shrink a bit in the washer/dryer, so order size 6 months for a newborn and after a washing, it will fit fine with tons of room to grow).

Here are Henry’s baby gear posts… It’s funny for me to read these – I no longer use a diaper bag [a big purse works just fine] or a baby bathtub [I just get in the bath with her or bathe her in the sink].  Henry hated the swing and his Boba carrier, but Claire loves both!