On Christmas morning, we woke up bright and early and headed into Disney! 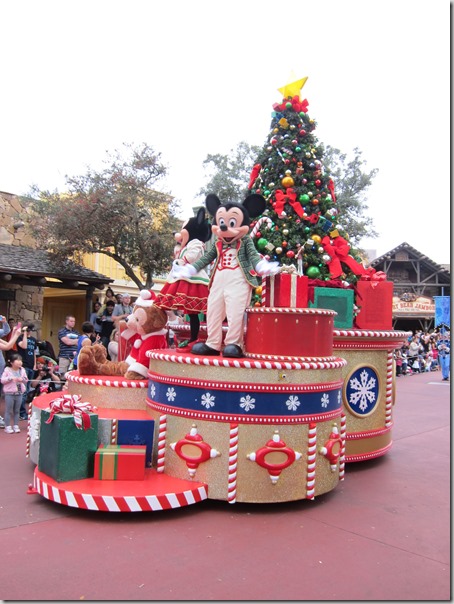 The decision to spend the holiday at Disney was completely spontaneous – and totally fun.  We decided to go down, packed the car that night, and left the next day!  We “planned” the trip from our phones in the car.

Henry has just started to get really into the Disney characters (he loves Mickey but adores Donald because MomHTP does an amazing Donald impression), and we knew he’d have a blast “meeting” everyone. 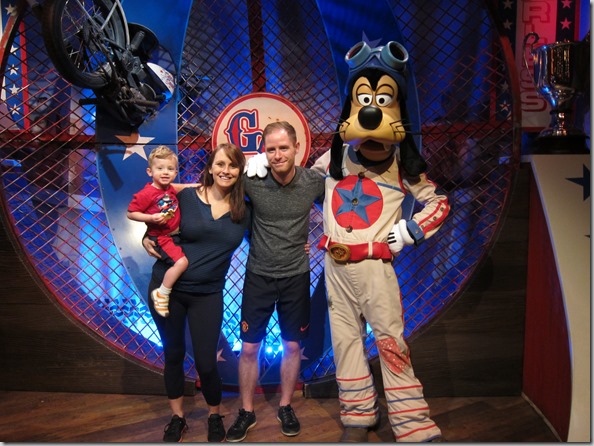 Claire spent 98% of the time in her stroller, tucked safely under a blanket, but I think she had fun, too… when she actually cracked her eyes open (which rarely happens). 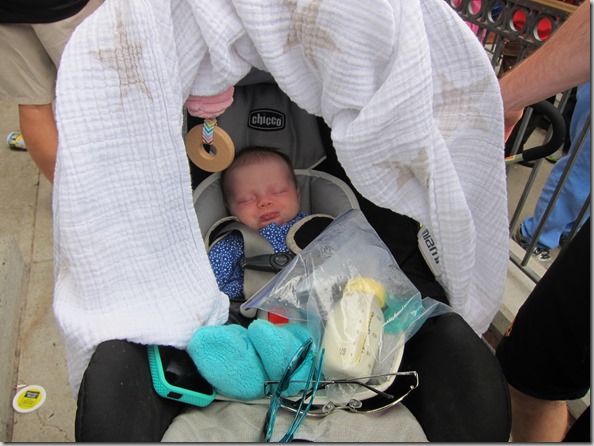 My advice for going to Disney? Seriously, you *must* download their app.  It has a GPS-enabled map and updates you on the wait times for the rides in real time. 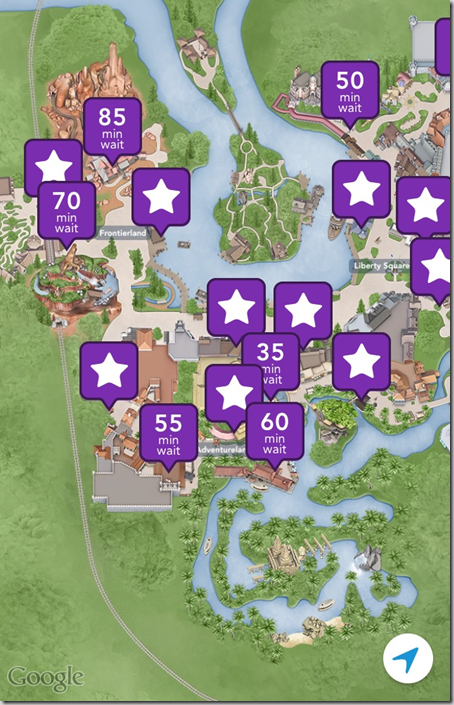 But the best feature is that you can use the app to book Fast Passes for rides.  You can do three Fast Passes per ticket and, truthfully, three rides per day was a perfect amount for a toddler.  We never waited more than 10 minutes for a ride, which was amazing because the park was otherwise packed. 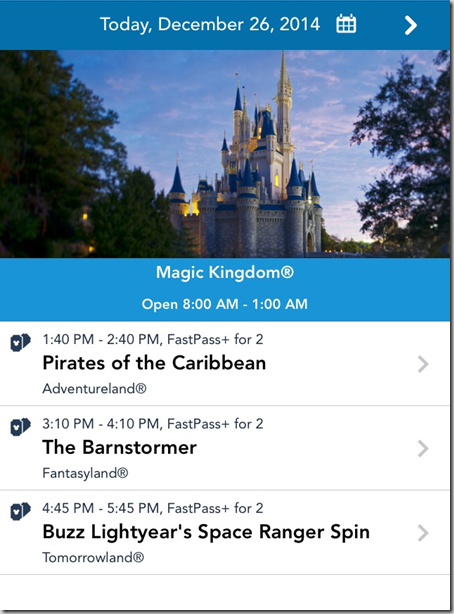 We did some rides as a family (It’s a Small World and Pirates of the Caribbean) because Claire could go on those in the Ergo.  But usually, we tag-teamed the rides so Henry could go twice; toddlers LOVE repetition so that worked out well. 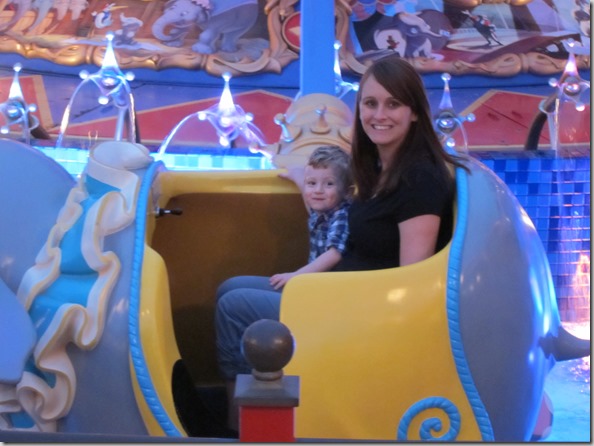 I was very impressed that Henry actually went on a ROLLERCOASTER (the Barnstormer).  He cleared the height restriction by a hair (truly, I think his curly hair made him juuuust tall enough), and he absolutely LOVED the twists and turns.  I swear – he will grow up to be an adult who skydives and bungee jumps.

We stayed off-resort at the Caribe Royal, which is a suite-style hotel a few miles from the park.  A suite is absolutely clutch with two kids. 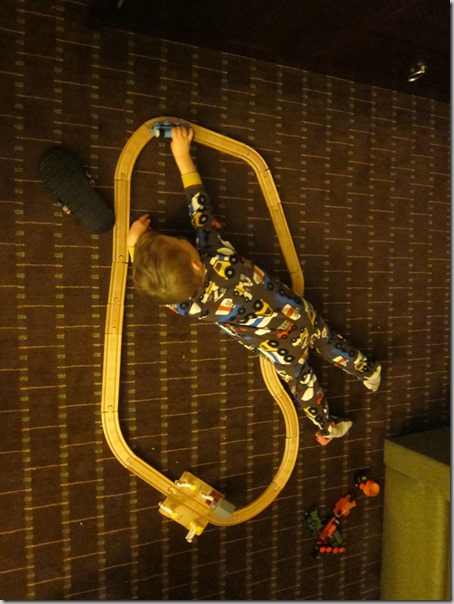 (I remembered to pack Henry’s train tracks this trip – he was so much happier as a result.)

I would recommend this hotel to anyone!  It was really nice, relatively affordable, and close to the theme parks.  Plus, the pool was great.  There was a wading pool and a playground, too. 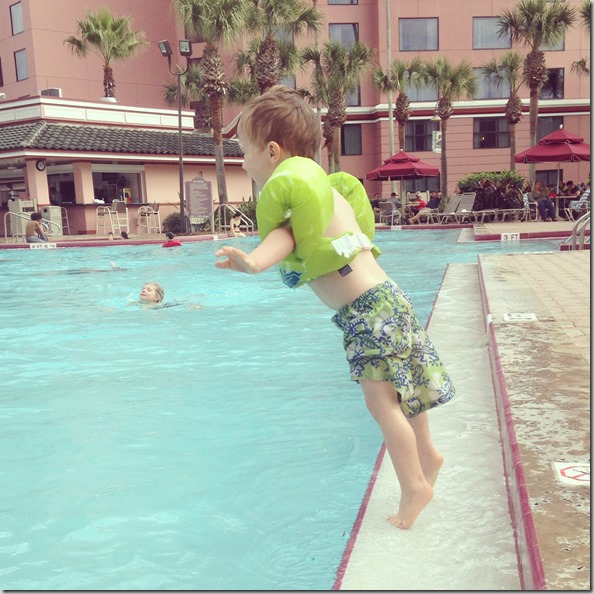 See? Constantly sleeping!  Except at night, of course.  Hah.

Good times.  <3  It was a wonderful family trip and exactly what we needed.  And it was pretty fun to do something so spur of the moment.

For the first time in a long time, I don’t have a fitness-related NYR!  Well – I certainly have health and fitness goals for 2015 – I’m signed up for a 5K in March and an Olympic triathlon in August (wahoo!).  But they’re not really “resolutions” per say.

My NYR is to read a book a week for the entire year – so 52 books! (I got this idea from the Happy Herbivore; here’s her post for 52 Books in 2014). I think this will be a challenge but not impossible (I’m a fast reader; it’s more about simply replacing mindless phone browsing or TV watching with reading).  I’m excited about this resolution because it will encourage me to use the library more, which I really want to do, not just for myself, but for my kids, too.  I used to be really great about reading every single day with Henry, but we’ve kind of fallen out of the habit. And of course, reading to Claire will be very important in just a few months.  So I hope that actually getting to the library for my own books will encourage me to check out books for the kiddos, too.

So – what books do you recommend that I read?  And what’s your resolution?