Who has a candy hangover? 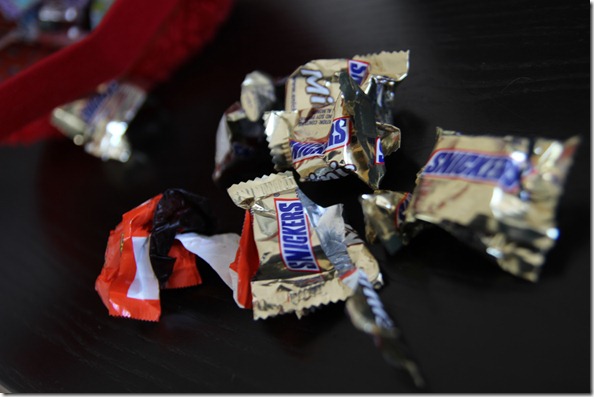 Bonus of being a parent – you get to enact a “Mom Tax” on your kid’s Halloween candy!  Hah. 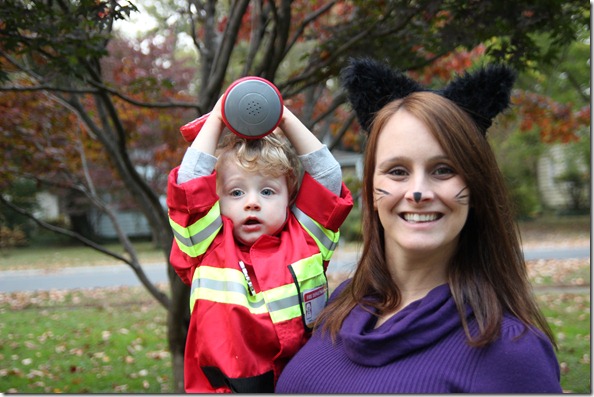 On Friday, we had an awesome time trick or treating. I had no doubts that Henry would be really into it, as his favorite things are 1) talking to strangers; 2) getting attention; and 3) candy.   I’ll admit that I put zero effort into his costume (or mine or the Husband’s).  In the past, we’ve rented costumes and gone all out in our dress-up, but October was so hectic that I phoned in our get-ups.  Henry’s fireman outfit was a dress-up costume that my mom gifted him last year.

The only reason the Husband and I ended up being “cats” is because BFF Nicole painted on our whiskers when we arrived at her house.  Nicole and her hubby, on the other hand, went all out and were super creepy skeletons. 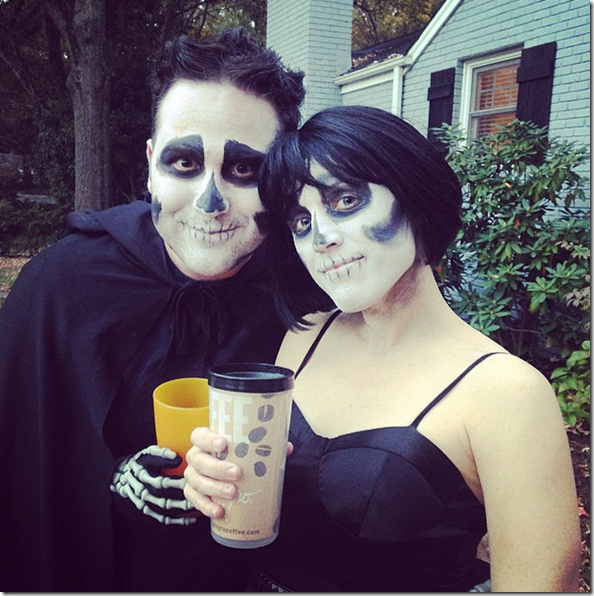 After roaming the neighborhood for a while, the kids started to complain that they were tired, so we went home and everyone ate a ton of candy.  I place no real limits on how much candy Henry can eat on Halloween, but I cut him off the next day (cause, you know, Mom needs chocolate, too…). 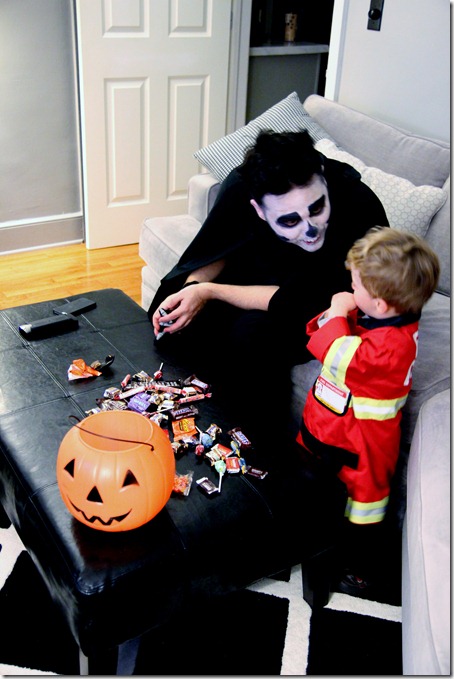 On Saturday, we recovered from the previous night’s fun.  I ended up walking around the mall with Nicole while Henry napped – the mall was nuts!  I can’t believe people are already doing holiday shopping. That evening, I ended up not feeling too great {pregnancy-wise} and glued myself to the couch.

I was super disappointed to miss my friend Sean’s big photography event.  He pulled together this awesome project in Uptown Charlotte – he organized 150 photographers to simultaneously photograph a mile-long section of a big boulevard, and he’s going to digitally stitch it together to create the world’s longest panoramic photo!  You can read all about the project here – it’s pretty cool!

On Sunday, I felt a bit better, so I went to the gym and walked on treadmill for 20 minutes – that’s pretty much what my exercise has come down to.  Short walks!  It’s no wonder when I look like this… 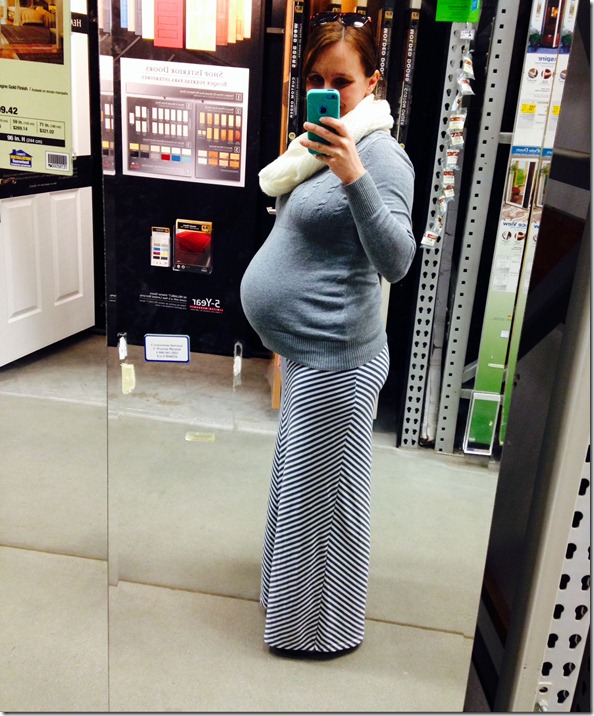 Also, I cannot let this weekend pass without mentioning the hell that Daylight Savings Time brought down on my schedule/life.  Whoever invented this shit did not have a toddler.  But there are SOME positives to the time change… 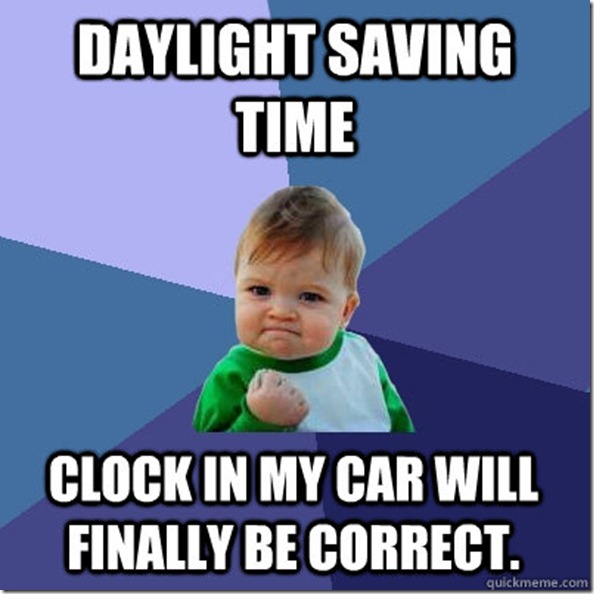 Let’s see – what else?  Oh, here are the three best things that I ate over the weekend: 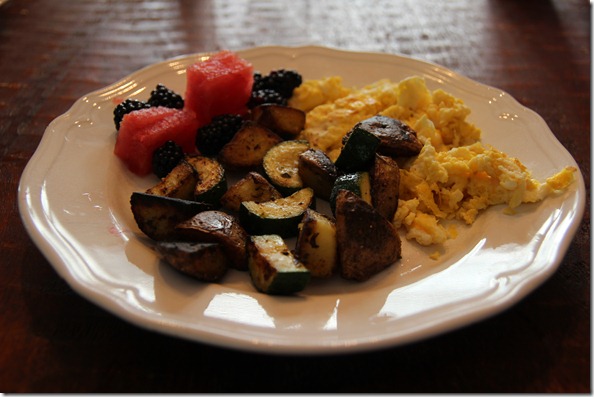 #1 – Stir-fried potatoes and zuchinni, fruit, and eggs – because breakfast always tastes better when the Husband cooks it! 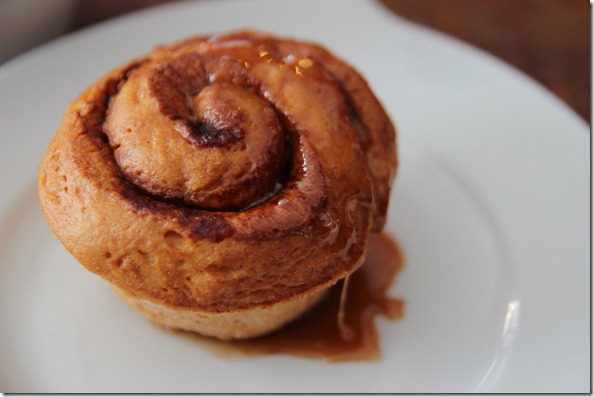 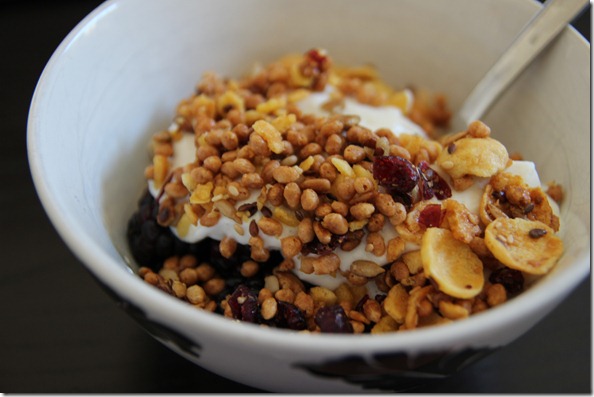 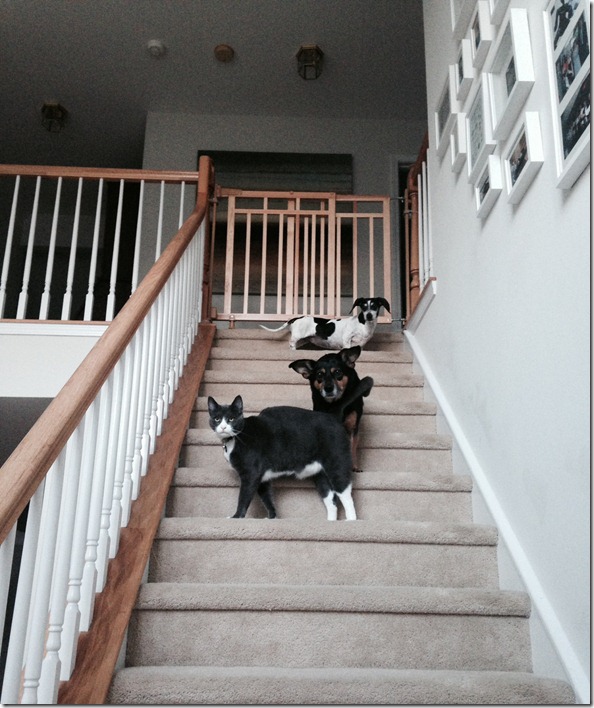 This is the daily animal traffic jam on my stairs – Ferguson runs down first and then refuses to move, and the dogs then stall out because they refuse to pass him because he’ll beat the crap out of them.  It’s pretty funny.

Something Worth Talking About…

Matt from NoMeatAthlete.com wrote a HuffPo article entitled “The Not-So-Secret Secrets to Succeeding at Anything.”  It really made me pause and think.  One of his arguments is that “everything in moderation” doesn’t always work if you want to be successful.

I talk a lot about big, "unreasonable" goals. Their power is that they’re exciting. They create energy. They’re the last thing you think about at night and the first you think about in the morning.

But if you aren’t willing to obsess over them, you’re wasting your time. That’s the whole point of setting your goals so big.

The very nature of all-consuming obsession is that you can’t do it about very many things. So pick the three — or better, the one — that’s really worthy of your time and energy for the next few months or years.

Then go make it happen. Whatever it takes.

Do you believe in “everything in moderation” or do you think you have to be “obsessed” to meet goals?  Does it depend on the goal?