A great way to kick off triathlon season (I think… see my ramblings below). 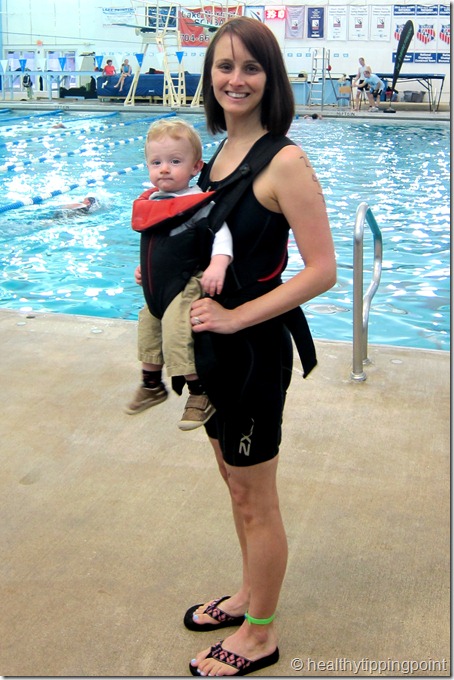 On Sunday, I did the Huntersville Sprint Triathlon.  The race was a 500 meter pool swim, a 12 mile bike, and a 5K run.  It’s one of the first triathlons in the Charlotte area for the 2013, so I was very excited to participate.  Plus – Kristien and Henry came with me, which was really, really nice.

I’m getting to the point with triathlons where I no longer feel satisfied ‘just’ to finish.  I want to do well in my age division.  I have mixed feelings about this new desire – for several reasons.  First of all, when it comes to racing, I have never really been competitive with others.  For a long time,  I just wanted to finish.  First, I had to get over “I am going to die in the lake” and then I had to get over “I am going to crash on the bike.”  Then, I had to get over “I cannot possibly run several miles after almost dying in a lake and almost crashing on a bike.” I am definitely not a ‘natural’ triathlete, and there were a lot of fear barriers to overcome when I first got into the sport.  But I’m not afraid anymore, and I haven’t been for a long time.

So I transitioned to “I am going to work on beating my personal best.”  This is tricky with triathlons because the distances always vary slightly (I’ve seen sprint tri with 500 yards or 750 meters of swimming, for example).  For that reason, I decided that I also wanted to start doing better in my age division, mostly because I always place near the bottom.  50% would be great!

The trouble with this newfound desire to compete against others is that although I walked away from Sunday’s triathlon feeling really good about myself (I didn’t know my time yet), when I got home and checked my ranking, I felt like poop.  Once again… I found myself at the bottom of the heap.  Hmmmph.

I was feeling pretty down about myself after I checked the results because I REALLY thought I had done well.  So I decided to take a gander at the other female age groups.  The red arrows is where I would have been if I had been in the 20 – 24 or 30 – 34 age groups. 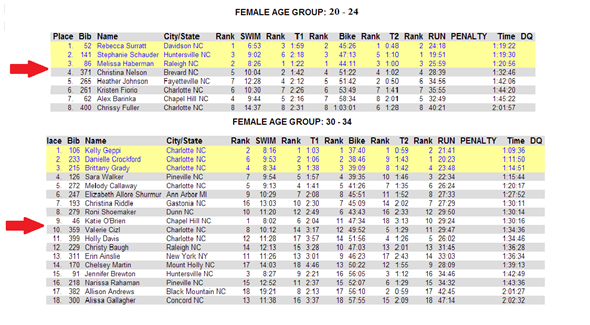 Big difference, right? I  would’ve been 4th / 9 if I was 24 years old, and I would’ve been 10th / 19 if I was 30.  And although I just had a birthday on Friday, I am unfortunately not 24 anymore.  And I’ve still got 353-odd days until I am 30.  So basically, although my ‘would’ve been’ rankings are meaningless, they did make me feel a bit better.  Maybe my age group (25 – 29) is just extremely competitive? Maybe I just didn’t luck out and was up against some really fast women (that is certainly true!)?

Anyway – onto the race. 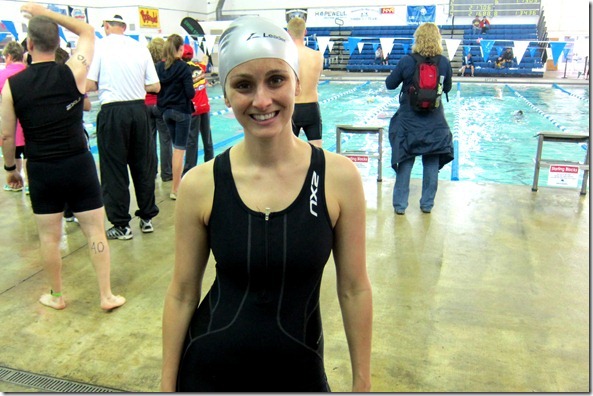 This race was a pool triathlon.  The way it worked was participants entered the pool according to their bib numbers (which was based on your anticipated swim times) with 15 seconds in between each swimmer.  I was bib #297, which meant that I didn’t begin swimming until an hour and a half after the race officially began.  There was a lot of waiting around, but at least the Hus and Henry were with me, so it was okay. 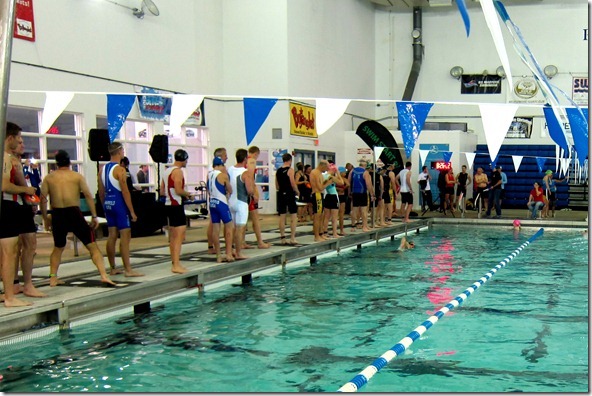 Henry really liked watching the swimmers!  We just started taking him to swim class, and he loves the water (heck, he swam ‘with’ me two – three times a week when he was in utero!).  Did I mention he has also started to RUN?!  Yes.  10.5 months old and running everywhere.  Lord help me.   Maybe he will grow up to be a triathlete, too! 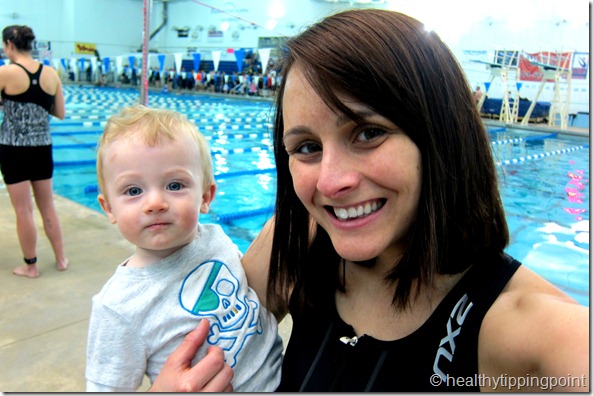 Each swimmer went up one lane, ducked under the buoys, and then went down the other lane.  I think there were 20 lanes in total. 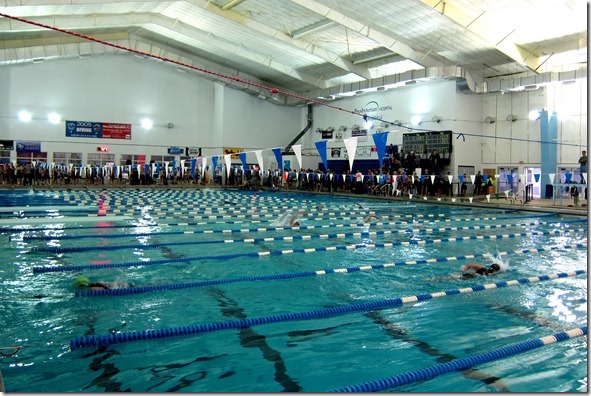 Finally, it was my time to go! 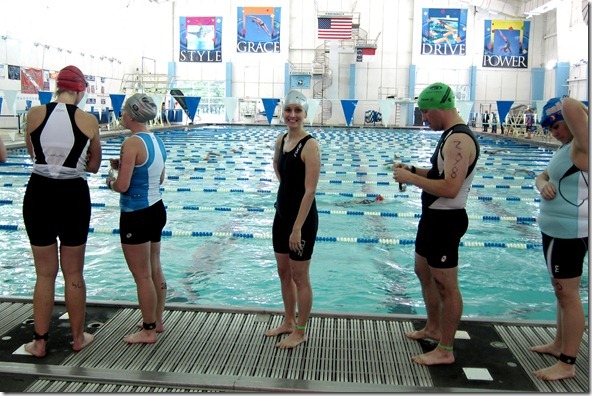 I am pretty proud of my swim.  I started off too fast and had to pull back after a 100 yards or so, but I did manage to pass not one, but TWO people!  That means the second person I passed had a 30-second head start on me and I still caught them.  I almost passed a third but didn’t quite get there. 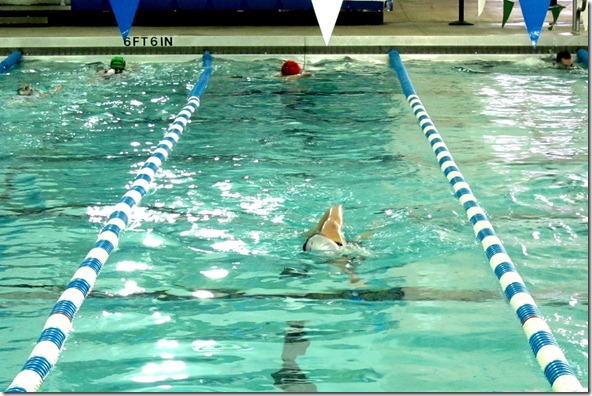 My big goal for this race was to work on my transitions.

My first transition was definitely the best – I got out of the pool as fast as possible, ran to the transition area, and got geared up for the bike.  I had the 5th fastest transition out of my age group! 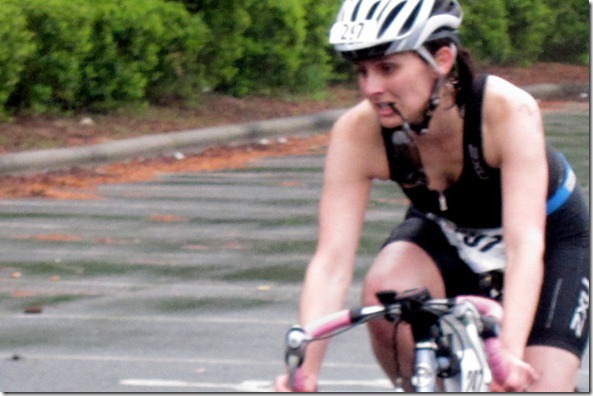 (Sunglasses in my mouth – told you I was rushin’)

The bike is, by far, my weakest sport.  It was also raining, and I am pretty scared of cycling in the rain, so the bike leg was all-around lackluster.  I was pretty happy when it was over.  My Garmin said it was 12.5 miles, and I finished in 48:14 – second to last. 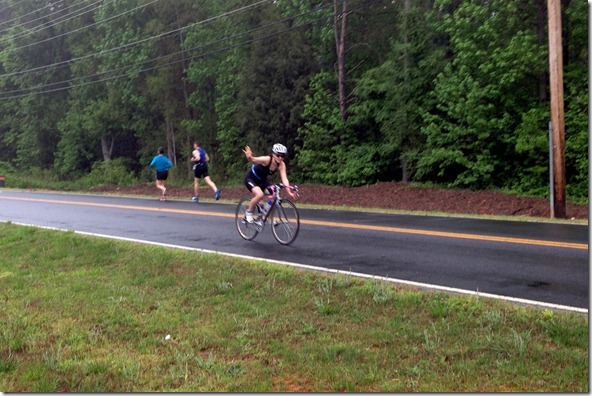 T2 was rough.  When I got off the bike, I was instantly super dizzy… not sure why as I definitely fueled properly.  But I was so dizzy that I couldn’t rack my bike properly, and I ended up knocking over the bike next to mine.  So then I had to rack my bike and re-rack the stranger’s bike.  My socks were soaked from the rain, so I not only changed shoes, but socks as well.  The dizziness definitely did me in – it took me 2:41 to transition, the worst in my age group.

I was very excited for the run!  I felt strong the entire time and never stopped to walk.  I did the 5K in 27:34, which is always a good 5K time for me, but especially after a swim and bike.

All in all… I thought it was a great race, but like I said, I was disappointed when I looked at my rankings. Upon examining my feelings, I realized that I say I want to do better in triathlons, but saying it and putting in the effort are two different things.  I can’t wish and hope my way into faster times.  So I guess this event was a good thing in the end because I feel more motivated to put in the extra effort and train harder.  This is just my first event of the season, and I have many, many weeks to improve!

I’d love to hear your thoughts on this subject. Do you compete against others in your age division or just focus on yourself?  Do you think your age division is more competitive than others?  Man – I think the 25 – 29 age group is tough!  I can’t believe I’m saying this, but… I can’t wait to be 30!