Healthy Travel? Workin’ On That

I said yesterday that my travel goal for this week was to eat healthy and workout regularly. Yesterday was a bit of mixed bag. I had French fries and Sour Patch Kids for dinner (which, while delicious, made me feel super blood sugary and grouchy), but Tina and I had a great workout. 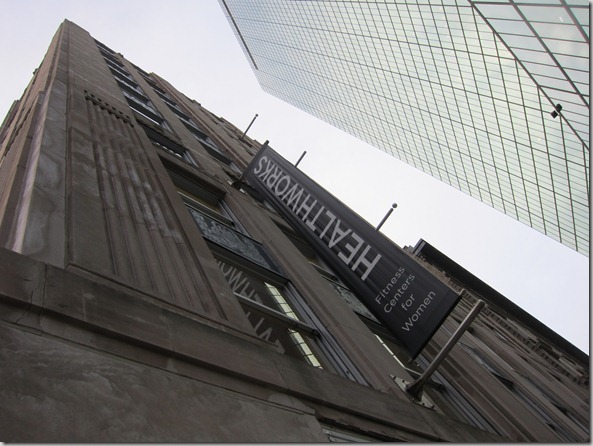 We headed to HealthWorks in Boston for a 5:30 spin class.  Tina hasn’t spun in a while, and I’m really trying to up my cycle time, so it was a fun class for us both.

The HealthWorks bikes have a computer monitor mounted on the front that displayed RPMs and miles traveled. This was really neat for me because the bikes at my gym aren’t as nifty, so I never know how many miles I ride in a spin class.  The verdict?  I did about 17 miles in a 45-minute class – not bad!  Something I’d love to replicate out on the road.

After class was over, I hopped in the gym’s shower, quickly got dressed, drove Tina to the T station and said goodbye, and headed to the airport.  It was nearly 1:00 AM by the time I made it to my next destination.

Blackout blind drawn, white noise app on, phone turned to silent… I had some AWESOME hotel sleep.  I slept until 10 AM, which translates into THE BEST SLEEP OF MY ENTIRE LIFE… or since Henry was born.  You know. 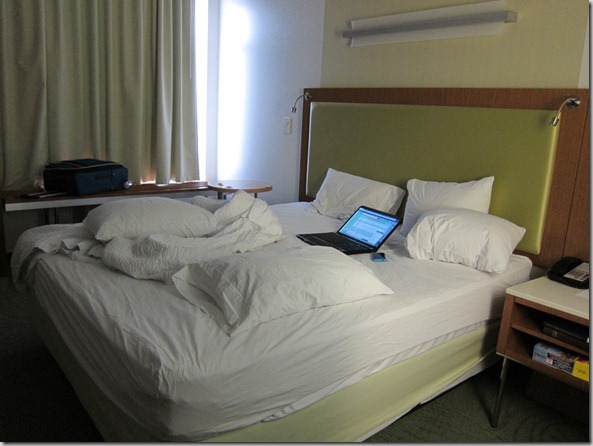 I spent the first two hours of my morning lounging in bed, checking emails, eating nuts and an apple (the only food in my purse!), and talking to the Husband on FaceTime.

A few people asked about what we do with Henry while I’m gone for work.  This is when both of us being self-employed really has its benefits (trust me – like all things in life, it also has its drawbacks, but that’s a post for another day).  Kristien just re-arranges his work schedule so that he can be home with Henry; sometimes we get DadHTP to do a little babysitting if my flight home slightly overlaps with Kristien’s appointments.  It works out well, and I think it’s awesome that K and H get to spend so much alone time together.  Kristien is 110% capable of being the solo parent, so I never worry about Henry.  K watches him like a hawk!

Here’s what Henry has been up to while I’ve been gone.  Learning how to climb into the tub!  We gotta put an immediate stop to that – he’ll soon be able to actually do it! – but watching his little legs scramble up the side is pretty cute.  I can’t believe he can do this at 8.5 months.  Insanity, right? Future rock climber, perhaps?

I have no idea why my pump is on the floor in that video… Oh, and lots of you have always wanted to hear the Husband’s accent, so there it is!  #YayBrits

Anyway, I finally peeled myself out of bed and headed to the nearest grocery store.  I am pretty determined to have a healthy eating and exercise day!  I purposefully booked a hotel room with a fridge and microwave since I’ll be here for two nights – hopefully, it will make eating from a hotel that much easier.  Here’s my haul: 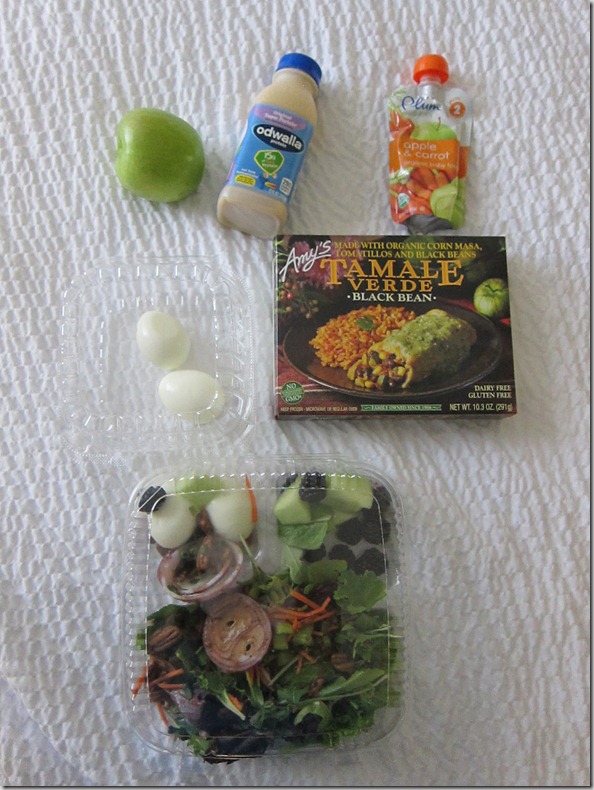 An apple, pureed food pouch, an Odawalla protein shake, hardboiled eggs, a microwavable dinner, and a big salad with fruit and more eggs from the grocery store’s salad bar. The baby food pouch is actually for Henry for when I get home.  <3

On the way home from the store, I spotted a Once Upon a Child.  If you’ve got a kiddo, you’ve got to check out OUAC; it’s a consignment store, and it’s awesome.  This OUAC was HUGE.  So much bigger than our Charlotte store.  I had to resist the temptation to load everything up in my suitcase. 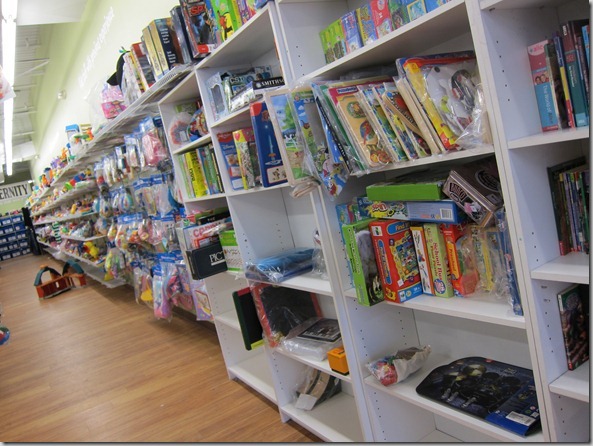 I went home with only ONE thing – this wooden doggie car.  Henry is really into cars now, so I hope he likes it.  Only $2 – can’t beat that. 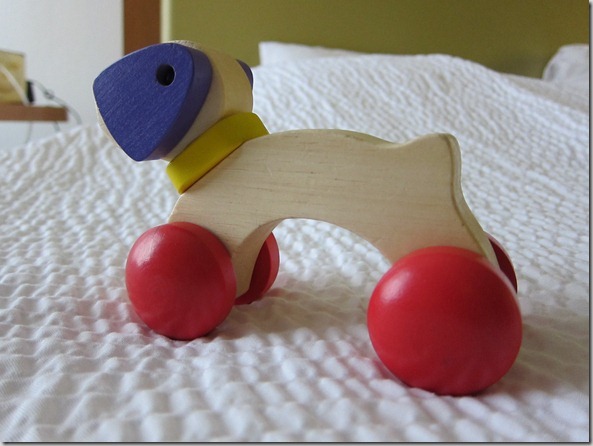 Yes, I want to be the kind of parent that goes away for business trips and brings home presents.

I’m off to squeeze in a treadmill speed workout – I’ll be sure to post it! – before I head out. Hope you guys are having a great Tuesday, too.