on September 10, 2012
in Breastfeeding, Mommy Struggles

I’ve been meaning to write this post for a while! 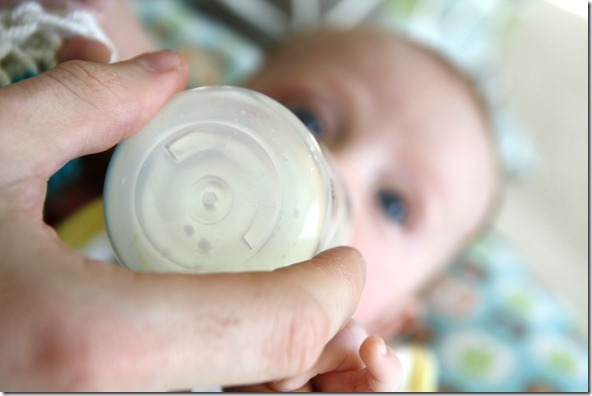 As I wrote the first time that I tackled the breastfeeding topic:

One of the things that I’ve realized about nursing is that is really can be difficult and trying (both physically and emotionally), as well as totally amazing, and it helps to hear other people’s stories.

Medical professionals believe the breast milk is the optimal nutrition for infants (rich in nutrients and antibodies to fight disease; easier to digest than formula; lowers the rate of respiratory infections, asthma, allergies, obesity, Type 2 diabetes, as well as other diseases and conditions).  There are also benefits for the mother – the logistics of breastfeeding can be easier; you can save money; it helps burn off baby weight; and women who breastfeed are at a lower risk for Type 2 diabetes, breast cancer, ovarian cancer, and postpartum depression (Source).

Like most new moms, I always intended to breastfeed my baby.  But I was never really excited about the act of nursing.  I’ve heard some women say that they were really looking forward to nursing and couldn’t wait to breastfeed.  I was always kind of “meh” about the actual act.  However, I was committed to it because of the health benefits.  But I was also motivated to breastfeed because of the monetary benefits.  Breastfeeding is free, right?!  I figured that I’d be able to save so much money by breastfeeding – sweet! (More on the later).

When I wrote my first post on breastfeeding five weeks after Henry’s birth, I described the numerous issues that we were facing:  oversupply and strong letdown (which meant Henry would choke on the spray) and Henry’s allergy to dairy (which meant that I had to stop eating dairy completely).  An issue that I addressed in the comments section was my flat nipples, which basically makes it difficult for the baby to latch.  I would look at some of my friends’ nipples (yes, breastfeeding moms do things like compare nipples), and mine looked nothing like theirs – no wonder I had to use a nipple shield more often than not!  In the post, I said that, “{Breastfeeding} has been challenging, but my experience has been overwhelmingly positive; I think nursing is really fun, and I enjoy it a lot.”  While I did enjoy some aspects of breastfeeding, I think I was painting a rosy picture – for numerous reasons.  One, I really wanted to enjoy breastfeeding.  After all, I was committed to doing it for at least a year and didn’t want to hate it.  Two, I felt (and still feel) a lot of pressure from the breastfeeding community to LOVE breastfeeding.  Quite honestly, I felt guilty saying that I was not totally enamored by breastfeeding. 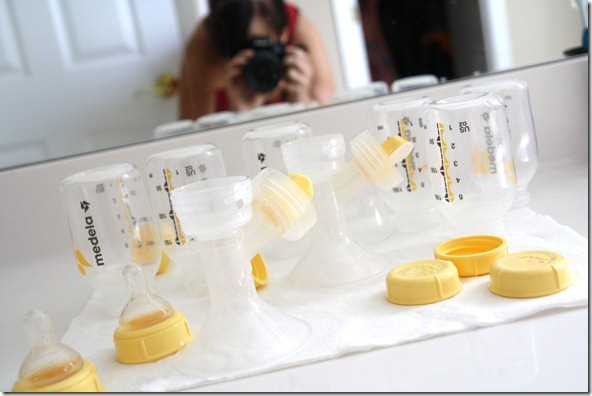 A few weeks after writing that post, the small part of me that felt negative about breastfeeding grew and grew.  I began to dread nursing sessions.  We graduated from the nipple shield but Henry still continued to choke on my overactive letdown reflex.  We’d end up covered in milk, and he would kick and scream through many feedings.  It was exhausting for us both, and I felt like he was never happy to be nursing.  And you know how breastfeeding moms talk about that ‘incredible bond’ they get from nursing?  Um.  I never experienced that.  Breastfeeding was akin to changing his diaper – something that I had to do for Henry to keep him happy and healthy, but not this magical moment.   Instead of feeling bonded because of breastfeeding, I began to feel trapped.  With his frequent feeds, I couldn’t even step away from Henry for more than 30 minutes.

Also, I began to realize that breastfeeding – at least for my family – was not free.  The fact that breastfeeding was ‘free’ was the biggest draw for me, remember?  But it was not free – not at all.  My best friend just has a baby and exclusively formula fed from the start.  One day, we were comparing notes on the cost of our babies, and I gasped when I realized that I had, unwittingly, already spent more money than she had on formula:

Grand total:  $550.  Now, granted, I realize that I did not really need to spend any of this money.  Nursing bras and tops are very, very helpful but not totally necessary – I also could’ve thrift shopped before Henry’s birth for some regular tops that buttoned down.  A pump is not necessarily required to breastfeed, but if you work away from home or travel for work, you must pump somehow.  Manual pumps are cheaper but can be very painful (I tried one; it didn’t work).  You can hand express milk but that can be inefficient.  My consultation with the lactation consultant was extremely helpful, but I could’ve gone to free classes offered by my hospital; however, I wouldn’t have gotten the one-on-one help in the first few days that I desperately needed to keep breastfeeding.

Anyway, I only do a financial tally of the cost of my breastfeeding experience because I really thought it would be ‘free.’  And it’s not for me.

My other issue with breastfeeding:  I began to hate having my boob hang out all the time.  I felt like I was naked 24/7.  My choices were either to breastfeed in front of family and friends or retreat into another room; I didn’t want to disappear every hour for twenty minutes, and while I’m not shy about nakedness, I really began to hate feeling ‘on display’ all the time.  The cover-ups were difficult to use and annoying.  And speaking of the logistics of feeding – our society is not breastfeeding-friendly.  People give you the stink eye for breastfeeding in public… even if you are covered up.  And I can’t tell you how many ‘family restrooms’ I have walked into and discovered that there is no chair for a nursing mom to rest in.

More than anything, as the weeks progressed, I really began to understand why other mothers choose to formula feed.  Look, it’s really, really easy before you have a baby to sit there and say, “Oh my god, I have no idea why someone would feed their baby formula.  Breast milk is so much healthier and cheaper and easier.”  I’ll admit – I thought like that.  “Breast is best,” as they say, and while I respected others’ right to choose formula, I couldn’t really understand why they would.

The reality is that breastfeeding is hard.  Everyone says it gets easier, and I’m sure it does, but the statistics don’t lie:  for many women, it is hard for a long time, and most ‘drop-out’ before it gets easier. 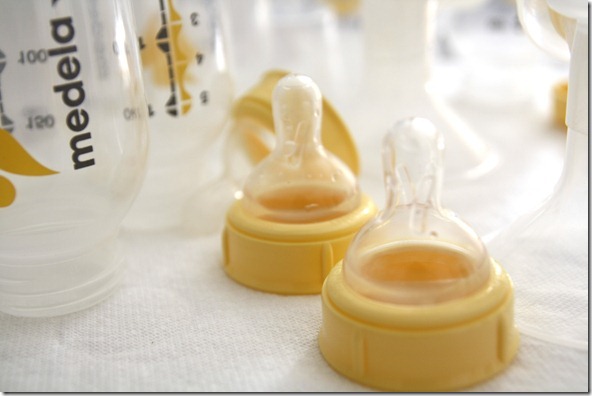 So.  Over the course of a few weeks, I began to pump more and more.  I started off pumping a bottle a day so that the Husband could feed him once at night, but soon enough, I was pumping almost every bottle.  Before I had Henry, I used to think that in the spectrum of breastfeeding and formula feeding, pumping would be the worst.  No magical breastfeeding bond, a round-the-clock commitment, boobs still full of milk, and bottles to clean.  But for me, pumping really isn’t that bad.  Yeah, it’s not ideal, and it’s not the way that I expected to feed Henry.  There are many drawbacks to pumping – it’s annoying and time-consuming.  The stress of being tied to a pump has been hard – I had one epic crying session.  But I got over it quickly because there are benefits to pumping, too.  Henry gets to happily eat my breast milk; he eats more milk per session and seems more satisfied.  He’s not struggling to latch to my breast or choking because of my letdown.  I feel more bonded when feeding him from a bottle.  Plus, other people can feed the baby, giving me a break and the Husband or DadHTP a chance to spend time with Henry.  I pump about 95% of Henry’s feeds and breastfeed every now and then.  Fortunately, he’s never had ‘confusion’ between the breast and the bottle, so we can jump back and forth in a pinch or at night.  He’s still fed exclusively breast milk, and I hope I can keep this up for a year.

The vast majority of my real-life friends breastfeed; most are doing extended breastfeeding past one year.  When they learn that I pump, I get a lot of “I’m soooo sorry” looks.  But pumping is my choice, and I don’t feel bad about it.  Sure, it would’ve been great if breastfeeding had worked out, but for so many reasons, it wasn’t for me.  Yes – it wasn’t for me.  Maybe some people would say that I should’ve fought past feeling trapped or naked or uncomfortable and gotten over it for Henry’s benefit, but you know what?  Henry is my priority, but I’ve got to think about my happiness, too.  I don’t feel selfish for giving up breastfeeding and choosing to pump.  Pumping has allowed me to feed Henry want I want to feed him and maintain my sanity.

I would hate to scare anyone away from breastfeeding – that is not my intent at all (and I would LOVE for breastfeeding moms to comment with their success stories just to illustrate the point that things can be easy and wonderful).  I do think it’s important to step away from the “breast is best” rhetoric.  All that does is make women feel pressure and guilt.  Instead, we need to prepare moms for the realities of breastfeeding and figure out ways to prevent issues before they start.  Education is paramount.  We need to make breastfeeding easier – like putting chairs in family restrooms, for goodness sake! 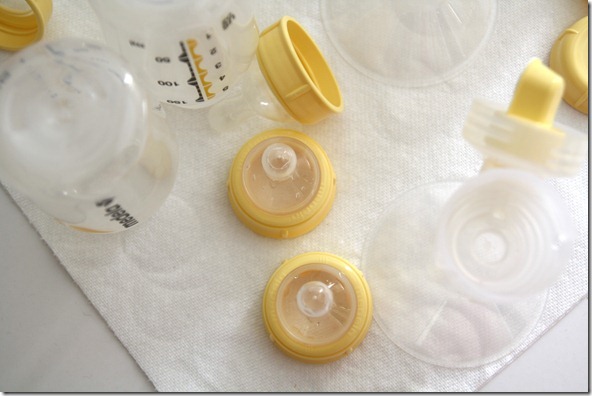 And I think everyone needs to keep in mind that while “breast is best” for the baby, moms who choose to pump bottles or formula feed their children are not selfish.  And we are not missing out on some magical bonding opportunity; there are many ways to bond with your baby, and quite honestly, I don’t think one is better than the other.  We do not love our babies any less because we give them bottles.  Some of us can’t breastfeed.  Some of us just don’t want to.  And that’s okay.  It’s hard enough being a mom without feeling judged for what you do or do not do with your breasts.

One of the greatest lessons that I’ve learned from being a new mom is this:  You really don’t know how things are going to go until you do it. And because of that, we should all just take a deep breath, chill out, and refrain from passing judgment.  That might be the ‘best’ thing of all.