True story:  This morning, I was at a mom’s group, sitting in a circle with four other women and their babies, when I reached down into my diaper bag to pull out a blanket.  I stood up, shook it out, and out fell a bright blue thong. 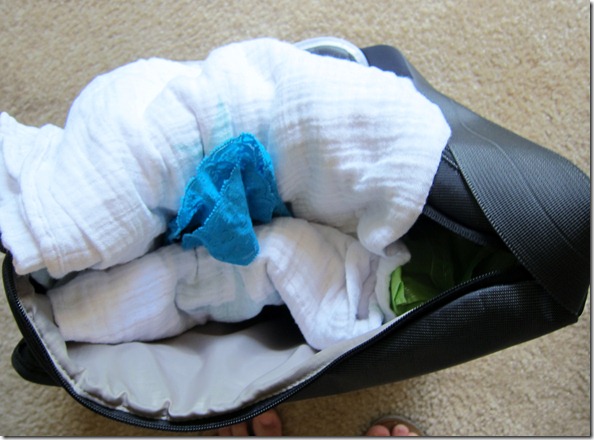 Of course, I was mid-sentence so everyone was already looking at me.  Ugh.  Hello, my name is Caitlin, and I’m a sleep-deprived new momma.  At least I do my laundry, right?  I just apparently just can’t sort it…

Henry had me up bright and early – 5:15.  We had breakfast on the deck (I had leftovers from dinner  and a peach) and then kicked off our big day out. 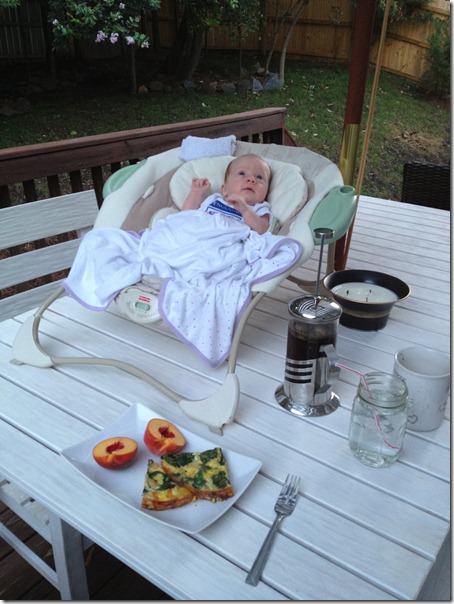 We had a doctor’s appointment at 8, which went well, and then we chilled at Earth Fare for an hour or so to kill some time before the mom’s group.  Earth Fare is one of those places that I can’t visit without spending at least $30 – kind of like Target.  Ah well. 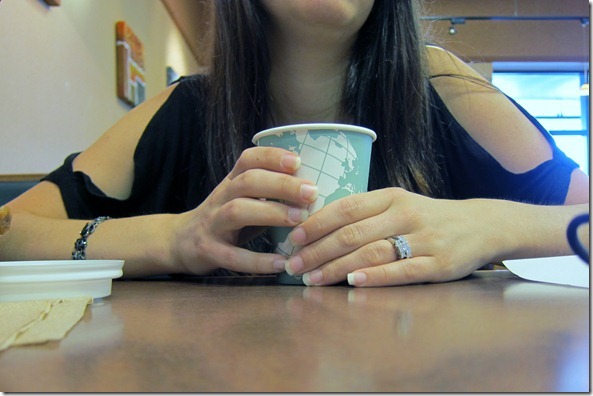 Had lunch from the deli counter (veggies, potato salad, and edamame). 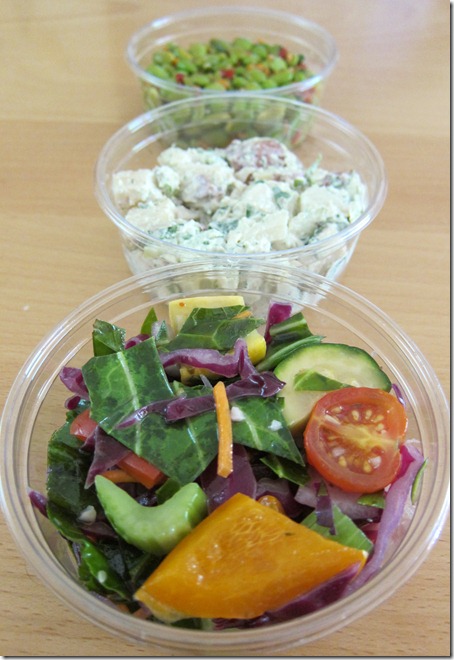 And then it was time for the mom’s group.  The group was actually for breastfeeding mommas, and it was held at the hospital that Henry was delivered at.  I was pretty excited for the meeting because I always feel like I have a million questions relating to breastfeeding.

Lots of people have asked for details on how breastfeeding is going, and everyone is SO different that I was hesitant to share my story, but I think I’ll go for it… One of the things that I’ve realized about nursing is that is really can be difficult and trying (both physically and emotionally), as well as totally amazing, and it helps to hear other people’s stories. 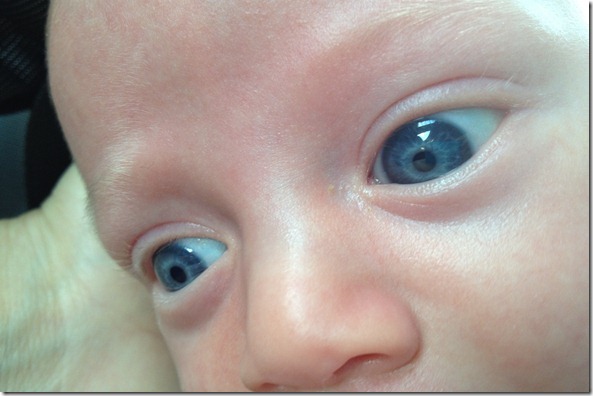 After 5 weeks of nursing, my breast best piece of breastfeeding advice is reach out to local resources like a breastfeeding group or the La Leche League.  The morning after Henry was born, I called a lactation consultant and scheduled an appointment for three days later.  I scheduled the appointment for three days later because 1) in the hospital, they had lactation consultants on staff to help me, and I would be discharged from the hospital soon; and 2) I was pretty sure my milk would be in by then.  I didn’t know this before pregnancy, but your milk doesn’t instantaneously appear after delivery (you do produce colostrum).  I wasn’t having any problems with nursing in the hospital when I made the appointment – I made an appointment because every single woman that I had spoken to told me they had some problem with nursing.  I considered the appointment my preemptive strike against nursing problems.

Turns out, by the time my consultant showed up on my doorstep, I was having issues!  I was using a silicone nipple shield (which compensates for things like oversupply or inverted/flat nipples and helps with latching), grappling with what would become oversupply, and Henry was feeding for very short periods of time around the clock.   I was very concerned about his short feeds; however, I realized within a week or so that it was just the way Henry wanted to feed – he was healthy and gaining weight.  Thankfully, his feeds have gotten longer and slightly more spaced out.  Instead of eating every 45 minutes to 1.5 hours for 8 minutes at a time, he’s now 2 hours apart and 15 minutes at a time (on average – we still cluster feed back-to-back in the evening, and he goes longer in between feeds during the night).  The consultant was so helpful on all fronts.  I’m still using the shield because it really helps ‘protect’ Henry from my oversupply.  Otherwise, he ends up choking on the milk (to put this in perspective for other nursing mommas, I can eaaasily pump out three ounces per side in five minutes or less after a feeding).  So, although my issues haven’t been entirely resolved, they are improving… slowly but surely.

One problem that I encountered last week was that Henry started to react negatively to what I was eating.  This entire time, people have been asking me if he’s bothered by my coffee, beans, broccoli, spicy foods, whatever – and I could honestly say that nothing I consumed irritated him.  It didn’t seem to matter what I ate or drank, he was still happy and healthy and appropriately sleepy or alert.  Then, about ten days ago, I could tell something was up – his poop was suddenly not normal (greenish and spotted with blood).  Of course, I was very concerned and called my pediatrician and the lactation consultant.  They both agreed that the symptoms, while scary, weren’t necessarily an emergency, and that the most likely culprit – and the easiest thing to rule in or out – was a food allergy.  The most common one for little babies?  Dairy.  So I cut out all dairy and within four days, his symptoms went away totally.  Whew!   Then, I accidentally ate some butter, and his symptoms re-appeared in the next diaper, which confirmed his little tummy did NOT like my dairy consumption.  This means that I’m currently not eating any dairy, which is very difficult for a gluten-free vegetarian but worth it.  I’ve read most babies outgrow this allergy from three to six months, so we’ll see what happens.

The even newer issue that I’m having is balancing nursing with exercise.  Lots of my friends have told me they opt to pump immediately before exercise, as this removes a lot of the milk and makes exercise more physically comfortable.  However, pumping when you have oversupply can be a double-edged sword because demand creates supply, and pumping can trick your body into thinking you need even more milk.  I end up having to be very, very methodical about when I fed Henry, when I pump, and when I exercise – it’s a tremendous balancing act!  I’d love to hear some advice about this topic from readers, actually, because I’m still trying to figure out how to wing it!

So, that’s my nursing story to date.  Like I said, it has been challenging, but my experience has been overwhelmingly positive; I think nursing is really fun, and I enjoy it a lot. More than anything, I would just really recommend that mommas-to-be who are interested in nursing reaching out and get professional assistance (check with La Leche League) before a problem comes up.  And go to things like breastfeeding meet-ups!  It helps normalize breastfeeding and it’s an awesome way to get advice. 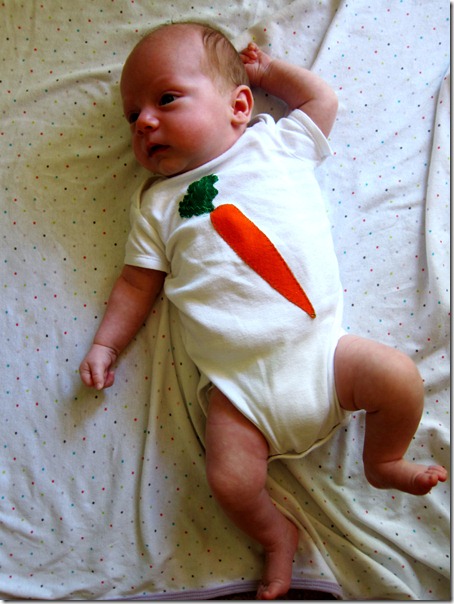 What was your nursing experience like?  Any highs or lows to share?  How did you deal with exercising while nursing?  I’d really love some feedback on that topic in particular!