Our breakfast ‘drink tray’ makes me laugh.  This is the minimum amount of drinks that will be on the drink tray any given morning (water and tea, plus an extra cup of brewed tea – can’t let it sit in the pot with the leaves or it gets bitter).  Sometimes, there are three or four drinks per person.  What can I say?  We like our liquids. 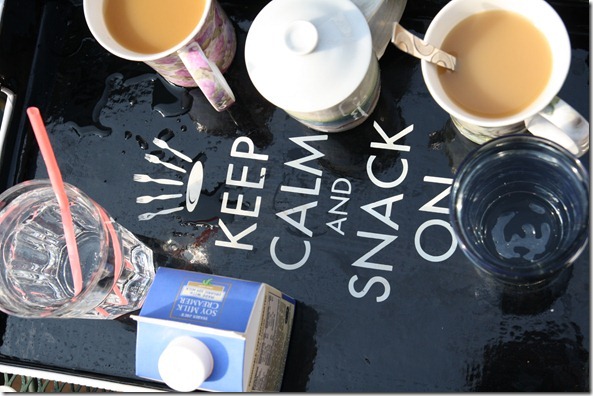 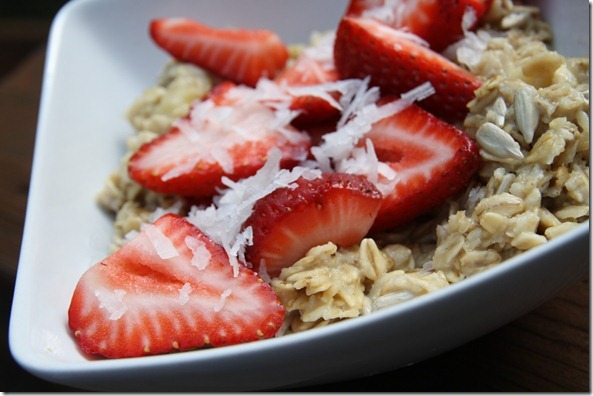 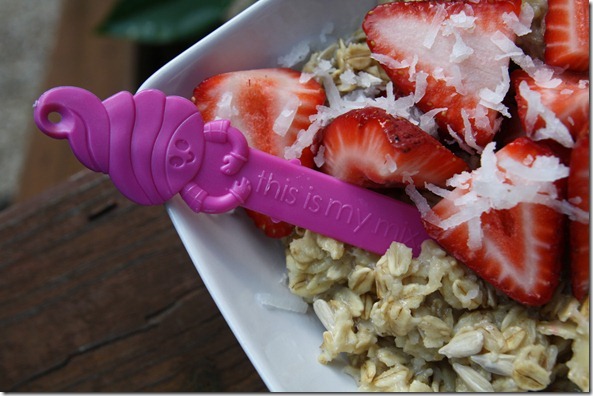 Time for even MORE success stories to celebrate the release of the new Healthy Tipping Point book!

Read on for inspiration!  These ladies have motivated me to go for a long walk on my lunch break. 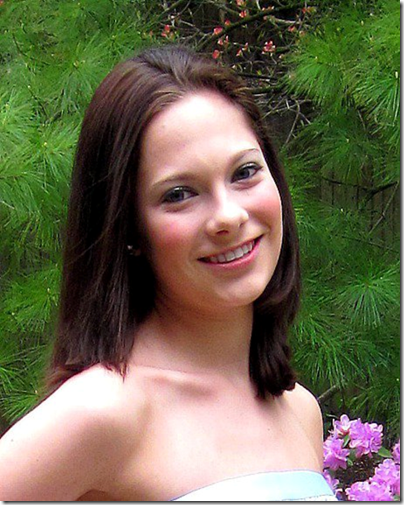 Courtney wrote:  My success has been a long time coming – since February 8th, 2009, that is. I was part of a competitive dance team and a varsity cross-country runner when my whole world changed. On that day in February, I was at a dance competition, dancing in a large convention room when suddenly my entire field of vision was tinted blue. I stopped dancing and left the room, and then I had a seizure. My dance teachers called an ambulance and my parents rushed to the hospital, where the doctors took some blood and blamed the seizure on dehydration, then sent me back home.

This incident would have been just a normal, spontaneous thing, but it happened again in May. I underwent a battery of tests to rule out brain and heart conditions, and in the meantime I was placed on an anti-seizure drug. It made me tired and gave me intense brain fog, but it didn’t prevent me from having another episode. By this point, the paramedics knew me by name! That September, I underwent a test called a tilt-table test. It’s pretty strange concept – they strap you to a bed and tilt it upwards until you’re in an almost-standing position. This test would be a piece of cake for most people, but it was torturous for me! It made me feel dizzy and faint, and the results of the test led to my diagnosis of postural orthostatic tachycardia syndrome. My nervous system doesn’t compensate well when I go from one position to the other, and exercise was making it go haywire! At this point I had two choices: to let this diagnosis dictate my life, or to deal with it and take it in stride. In the past three years, I can honestly say that I’ve picked the latter option.

Before I found the magic combination of medications that worked for my body, I felt dizzy and nauseous almost every day. It wasn’t safe for me to run outside anymore, and I was too tired to continue dancing. But I made a commitment to myself to stay involved: I worked out at the gym when I could, and now I’m pretty much at a normal fitness level. Some days are better than others, but as a whole I’m doing very well. I’d like to run a 5k this summer, but who knows? It all depends on what my body tells me it can do.

I’m now at a great college majoring in Human Communication Sciences and Art History. I’m an active member of my sorority, and I’m getting certified to be a Zumba instructor this June! My advice to anyone facing a chronic illness: don’t let it stop you from achieving your goals. Know that it will get tough sometimes , and you will get mad. Know your limits, but remember that there is nothing more satisfying than proving people wrong.  (You can read more on her blog.) 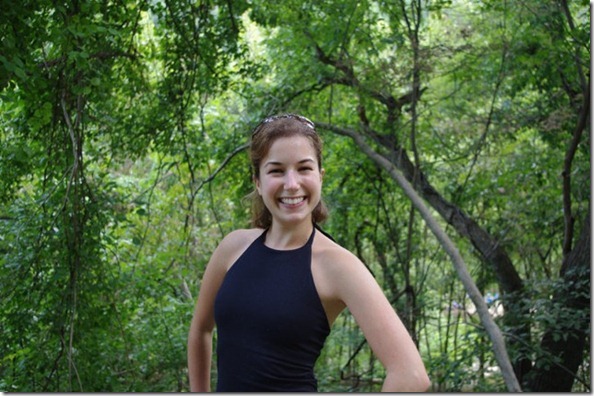 Shoshana wrote:  Soon after entering the 9th grade in 2001, I developed anorexia. I can not think of any speciﬁc reason as to why I began to severely restrict my food intake and exercise for hours every night. One theory that I have is that I was raised in a very religious, conservative household where many things were forbidden and the disease fed my intense desire to be “perfect” in every way. Also, for as long as I can remember, my mother was a very disordered eater. I am not in any way shape or form blaming her for my struggles, but I think that not having a healthy eating role model growing up was a contributing factor.

Obviously, my parents were terriﬁed with what was happening to me and took me to see a psychiatrist who specialized in eating disorders. She began to have me ﬁll out a food diary, told me to supplement my diet with Ensure, and requested that I return every week for an appointment and weigh-in. The Ensure was the bane of my existence. I just could not fathom drinking something that was so calorically dense.  One of my most vivid memories from that time involves me protesting my parents pleas to drink it, and my brother screaming “JUST DRINK THE DAMN THING!” Something inside me snapped. I was so sick of people telling me that I had to gain weight that I thought, “I’ll show them.” I managed to gain weight in a short amount of time, enough that it ﬁnally shut everyone up. At least for the next three years.

As anyone could have predicted, I was not at all happy with my new body. I felt incredibly uncomfortable in my skin, which was further magniﬁed when I switched to a new high school. In my “recovery” from anorexia, I maintained a very unhealthy relationship with food. Every morsel of that I consumed was agonized over and I could never just enjoy “unhealthy” food. I longed to enjoy eating treats with no guilt. In my senior year in high school, I thought that I found my solution.  During my senior year, I met a girl made no secret of the fact that when she eats too much, she makes herself throw up. Never before had I ever considered such a thing, but being completely out of my comfort zone emotionally and physically, an idea was planted. I vividly remember the ﬁrst time that I purged. I thought, “This is awesome! I can eat whatever I want as long as I get rid of it after!” So began a seven year bout of bulimia.

In some ways, bulimia is more destructive and dangerous than anorexia. It is by nature a hidden disease, since the act of bingeing and purging is so shameful that it is almost always done in secret. Within those seven years, my life changed drastically. My parents separated and divorced, I no longer chose to follow the religion in which I was raised, I went to college, took a year off to work after two years at college #1, transferred colleges and completely changed my major. Bulimia was the one constant throughout all of that.   I eventually realized that I could not get rid of the disease by myself. I sought out a therapist who began to help me uncover the many underlying factors that were fueling my desire to keep harming myself. We ultimately came to the conclusion that I felt that I, for many reasons, believed that I did not deserve to be happy, and that manifested itself in the bulimia. Ironically, the bulimia was the one thing keeping me from true happiness. Ultimately, I came to the realization that I didn’t need it anymore (this did NOT happen overnight but after hundreds of hours of therapy) and I refused to continue to be deﬁned by my eating disorder.

I’ve heard many people say that once you have an eating disorder, you will always have an eating disorder in some way. However, after consuming a little too much food, instead of running to the bathroom, I am strong enough to sit with myself, recognize how uncomfortable I feel and still be okay with it. I strive each day to properly fuel and treat my body with respect.  My success story has been eleven years in the making and still continues to take shape. Life is too short for it to be taken over by eating disorder demons. (If you need help in recovering from an eating disorder, check out the NEDA website.)

Jessi Falls in Love with Running 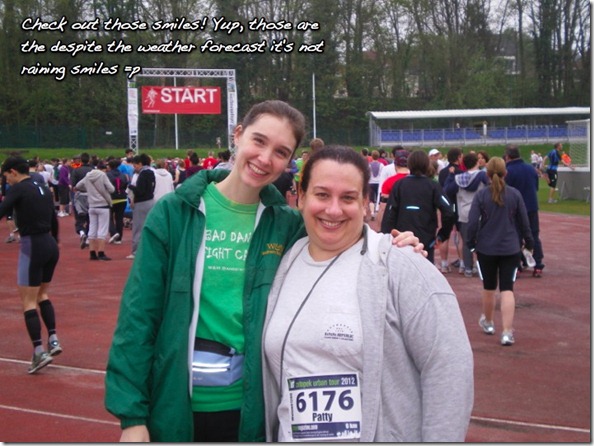 (Jessi is on the left)

Jessi wrote:  I am an ex-pat-PhD-turned housewife blogging about food, DIY, and fitness over at Doctorate Housewife.  I was blessed to grow up in a home where sports and fitness was the norm. But despite the addiction to team sports, I’ve always hated running.

Last year, my New Year’s Resolution was to give running a go. I signed up for the Brussels 20K (about 12.5 miles), trained for, and finished it. I had planned on it being a one time thing, but I liked it so much that I signed up for the Brussels Half Marathon. Still slow as ever, I decided that in 2012 I wanted to get faster. But then a friend told me about her resolution. She wanted to start running (but didn’t want to tell anyone until she knew she could do it). So she asked my advice in secret. I babbled on about all the things I’d learned over the past year and then I remembered CaitlinHTP’s posts about training her Girls on the Run team to run a 5K.  I decided my friend needed a race goal, too.

I started looking for a 5K we could do together and ended up finding a 6K that circles and celebrates the sites of our neighborhood. We kept it quiet for awhile, but then another girl from our group of friends mentioned she was doing the Couch to 5K program, and we knew we had to share. Before long the positive peer pressure landed us a team of six! In the end, one got sick, and another friend got stuck on a train coming from Paris the morning of the race, but everybody that made it to the starting line made it to the finish!! We hit our goal and now have the confidence and enthusiasm to take on the next challenge – an Ekiden (or relay marathon)! It may seem a little thing – just a short 6k – but I’ve been amazed at how with little steps, encouragement, and friends can add up to a real-life difference. I had planned to try and get faster in 2012, and that’s still a goal, but now my main resolution is to spread the fitness bug as far as possible!"