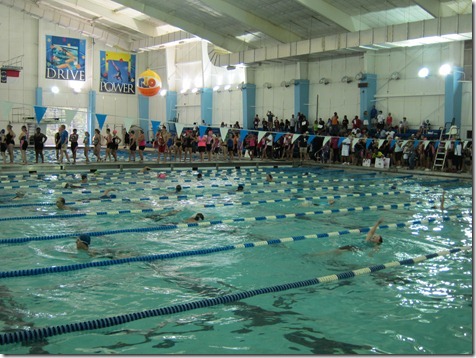 Is not the same as this… 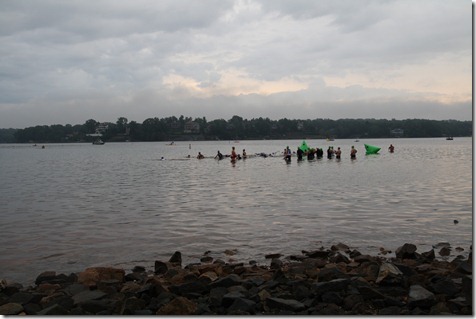 But in many ways, it’s better!

The Ramblin’ Rose triathlon series is the largest all-female tri in North Carolina and the state’s second largest triathlon, period.  The atmosphere was tremendously supportive and welcoming.  Women of all shapes, sizes, and ages tackled today’s race.  It was inspiring to see 10 year olds, 70 years olds, super athletes, and women on weight loss journeys on the course.

Because the race is designed for newbies, there were many hybrid and mountain bikes on the course.  Some women swam in bikinis.  I understand how intimidating triathlons can be – so much expensive gear – so it was very neat to how accessible Ramblin’ Rose was! 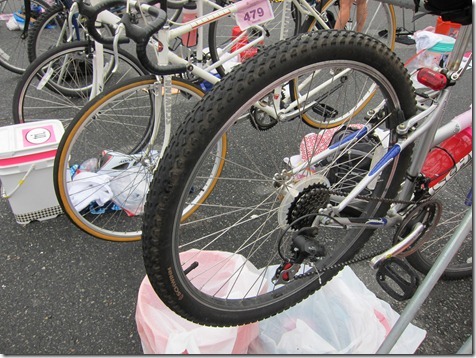 Even though I hit the road with more than enough time to spare and ate my peanut butter sandwich in the car, I hit major traffic and was nearly late.  I ended up parking in a lot that I knew wouldn’t be released until the race closed.  I dashed to registration without a second to spare and high-tailed it to transition area.

Another cool thing about Ramblin’ Rose was the neat ways women marked their bikes.  Trust me – it’s hard to find your stuff amongst 1,100 other bikes, especially when you’re tired. 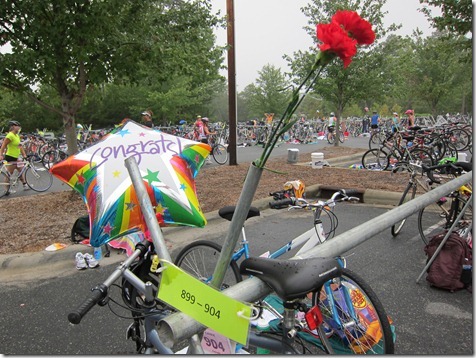 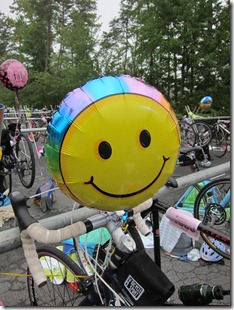 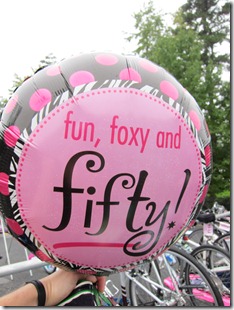 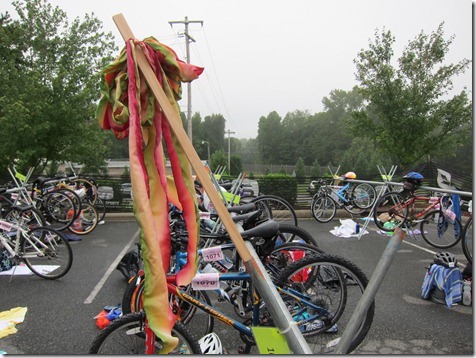 After setting up my gear, I headed over to the pool.

Here’s how this pool triathlon worked:  When I signed in, I had to choose a ‘wave’ for the start, depending on how fast I thought I could swim 250 yards.

I choose wave 8.  I thought it was a optimistic estimation, but I also didn’t want to sell myself short and end up crawling other other women.

The organizers set us up by wave, and then we walked in, single-file, across a bulkhead the separated the pool into two sets of ten 25-yard lanes.  When it was your turn, you ran across the timing mat, jumped in the pool (no diving), and began to swim.  They waited 10 seconds between each swimmer. 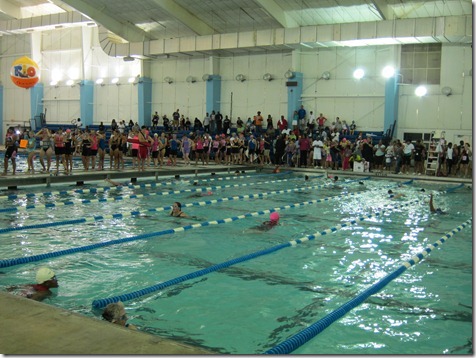 When you got to the end of the first lane, you had to duck underneath the buoys and swim up the other lane.

I was SUPER PUMPED to get into the water.  Lakes make me nervous, but man – pools are my thang.  I jumped in and swam like somethin’ was chasing me.  I ended up passing (and by passing, I mean crawling over, unfortunately) TWO women in the process.  On my 8th lap, I could tell my form was suffering because I’m not used to sprinting such a long distance.  I told myself, “Just 50 more yards,” and hung on until I reached the ladder and blasted out of the pool.  I ran out of the pool house, back to transition, and hit the swim mat in 5:24.

I really tried to speed up transitions and was on the bike quickly.  The bike was 9 miles so I felt comfortable pushing as hard as I could.  Honestly, I was back before I realized what was happening.  I finished the bike in 26:53. 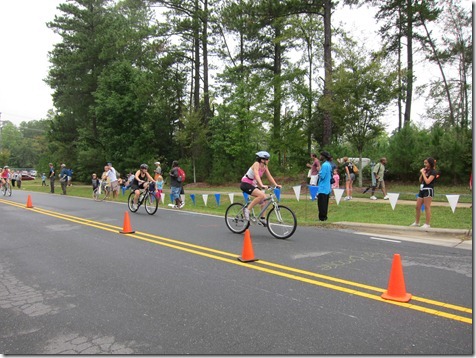 And then – it was time for the run!  My favorite leg, of course.  My game plan for the 2.0 miles was to run as fast as possible.  I wasn’t worried about burning out – I just wanted to finish the damn thing. 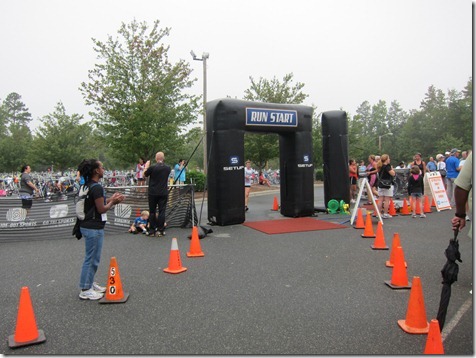 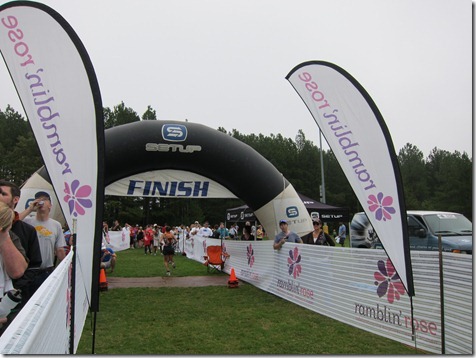 Instead of medals, Ramblin’ Rose gave out branded water bottles and a lovely charm.  Cute, huh? 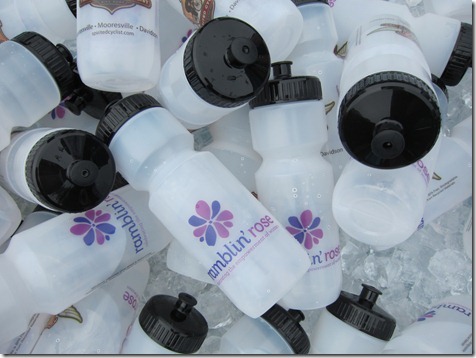 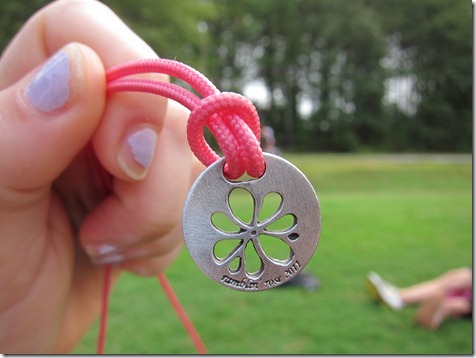 The finish line party was excellent (loads of yummy snacks like bananas and Lunabars, which I attacked) and fun booths with free massages and branded gear for sale.  Imagine my surprise when I stumbled upon the latest issue of Endurance magazine – with my mug on it! 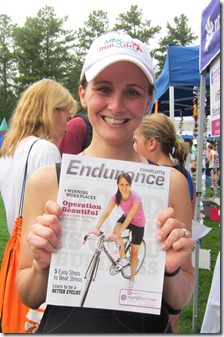 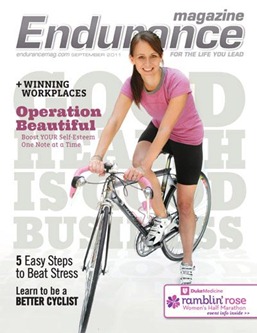 Endurance just did a cover story on Operation Beautiful!  It was very nice of Endurance to comp my race entry, too.

In summary, I would HIGHLY recommend Ramblin’ Rose to anyone who is interested in doing triathlons but is scared of open water or feel intimidated by a co-ed group.  It is a wonderful first triathlon.  The race was well-staffed and organized.  This year, there were/are races in Nashville, Raleigh, Rock Hill, Winston-Salem, Charlotte, Chapel Hill, and Durham.

You know what the BEST part of this race was?  There was no cut-off time.  The course stayed open for as long as it took for everyone to finish.  I have NEVER seen this before and really appreciated it (even though it meant I sat in a parking lot for three hours, starving for a real meal, because I started in the first few waves – it was worth it!).  When Ramblin’ Rose says they want to encourage all types of women to be active and do tris, it isn’t lip service – they REALLY mean it.  From the bumper of my car, I could cheer on the final women, and it was so truly uplifting to watch them finish. 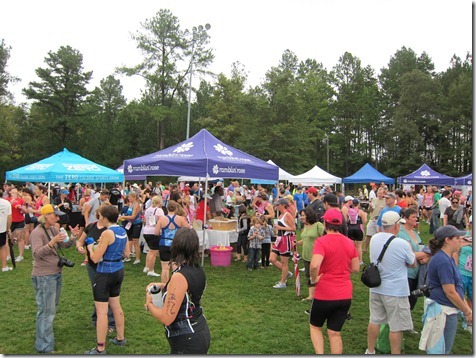 I finally got my real meal when I got back to Charlotte – I had a veggie burrito and a cookie.  YUM! 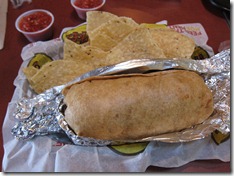 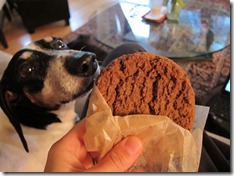 Have you done a women’s-only race before?  What did you think?

PS – My friend Tanya is giving away a free entry to the Ramblin’ Rose Durham half marathon, if you’re in the area!

Next post: What the Husband Learned After 1,000 Days of Marriage