I’m Having a Social Media Moment

On December 6th, the Husband and I were doing what we normally do – sitting on the couch and watching TV.  Per the usual, I was Twittering as we watched our programming of choice, which happened to be the latest reality show sensation, The Sing Off.

The Sing Off is basically a group, a cappella version of American Idol.  However, I was seriously doubting whether the numbers were live or lip-synced and Twittered:

Within minutes, my Twitter EXPLODED with fans insisting that The Sing Off was NOT lip-synced.  Apparently, a cappella groups take this accusation very seriously!

And then, suddenly, I received this e-mail: 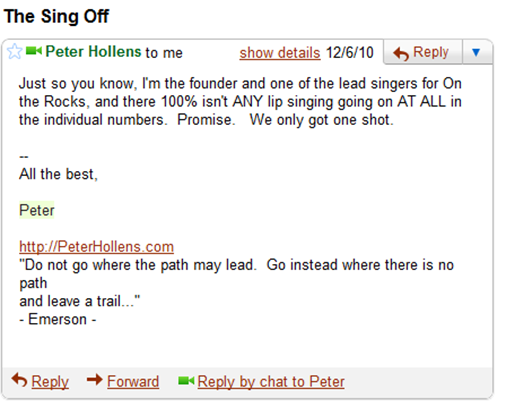 Not going to lie, I nearly fell off of the couch! It was SO STRANGE.  There I was, Twittering away my thoughts as I watched this reality show, and suddenly one of the people on the show was responding to my tweets via e-mail (the show is obviously not live).  I was gasping and laughing and groaning all at the same time – I kind of felt bad that I had insulted poor Peter from On the Rocks (they were really good).

So, in case you’re keeping score, this means:

It was a TOTAL social media moment.

So, Peter and I struck up a little e-mail friendship.  Turns out that being on The Sing Off has been incredible for his music career (he produces, too).  He sent me a few demos of his freshly produced a cappella solo, and since I felt so badly for insulting The Sing Off, a cappella fans everywhere, and Peter, too, I promised that I’d share the final version on the blog.

Pretty fun, huh?   If you love it, pass it on!  Peter says thanks in advance!

Have you ever had a crazy social media moment?  Spotted a blogger in public?  Tweeted a company to get better customer service?