on September 9, 2010
in Natural Birth Control

My, oh my – I left you hanging about one of my favorite non-food and fitness topics!  Where did we leave off?

I wrote Part II of the Big Birth Control Question series on a Monday, my first day without taking birth control pills in over TEN YEARS.   I had done some research and was a little concerned about going through “withdrawal.”  Every medical article I read said that it was statistically unlikely, but I spoke to dozens of women that said they experienced horrible headaches, nausea, and bloating as their body adjusted.

Going off the Pill was like the longest, worst hangover of my life!  The sensations hit on Wednesday (48 hours after I stopped the Pill) and lasted for another three days.  Honestly, it was pretty miserable, but I knew it would pass.  Exercising seemed to make me feel better.  The Husband also gave me several “women’s specific” acupuncture treatments that really helped.

I immediately started to chart my basal body temperature (BBT) per the Fertility Awareness Method.  I first tried charting on a sheet of paper. 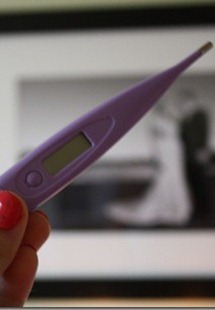 Because we were just starting the FAM method, we immediately began to use a back-up form of birth control (condoms).  We do NOT (NOT, NOT, NOT) want to get pregnant right now so we’re being extra-careful through this whole process.

Tracking on paper didn’t work for me.   I was too sleepy in the morning to write down my basal temperature (a shift in temperature indicates that you’re ovulating/can get pregnant).  And I kept forgetting to take my temperature until I got out of bed.

Within a few days of tracking on paper, I decided to try an iPhone app.  I downloaded FemCal for a few dollars. 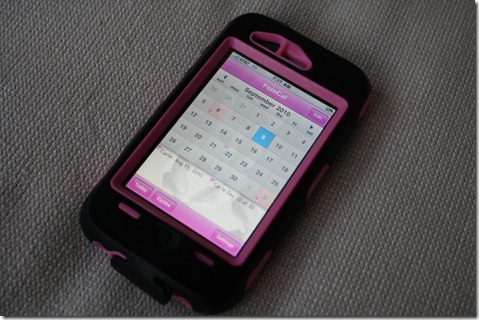 I actually really liked FemCal for several reasons.  It would create a little bar graph with all your temperatures and clearly label days GREEN (you don’t need to use back-up birth control, although we still did for the first two cycles) or RED (you’re fertile).

Throughout the entire first month, I was very worried that I wasn’t going to get my period.  I had heard SO many horror stories from other friends and bloggers who didn’t get their periods for months or even YEARS after going off birth control.

But on Day 13, I experienced signs of ovulation (and trust me, you know when you’re ovulating, especially if you’ve been on the Pill for 10 years) and cried tears of happiness!  I felt really blessed, as strange as that sounds.  And on Day 27, I got my period, right on schedule… the first month I was off birth control.

I think it’s easy to get wrapped up into this whole mentality of “there is something wrong with my fertility” because other women, unfortunately, go through it.  And people who have problems talk about it, of course.  Women who are blessed enough not to have issues don’t usually blab about it. But… don’t stress out until you know there’s a problem.  It’s just not worth it.  I guess I’m hear to say that being on the Pill doesn’t necessary screw up your “normal” periods.  It IS important to be aware of potential issues, though!

After about a month, I realized that I wasn’t being very good about the FemCal app.  I would wake up late or too early or drink too much wine (which all impact your temperature).  That’s when the representatives of Lady-Comp (Naturally For Her) stumbled upon my blog series about birth control and offered to send me one of their electronic fertility monitors to try out and review on the blog. 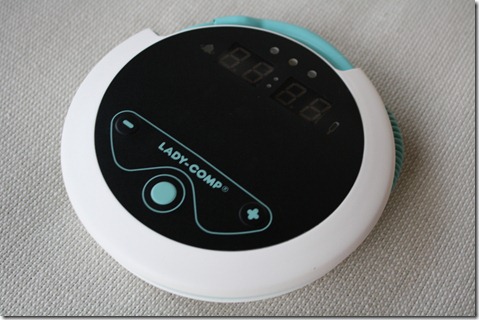 Lady-Comp is 99.3% effective when used correctly, according to clinical trials.  The machine uses the FAM method and relies on the following facts:

As mentioned, the FAM method relies on pinpointing a slight temperature shift (as well as other indicators; check out Taking Charge of Your Fertility) to determine ovulation.

Using your temperature reading (+ storing and comparing it to a database of other women’s cycles), the Lady-Comp will give you a RED light (don’t have unprotected sex unless you want to get pregnant), a YELLOW light (basically, the machine is in a “learning phrase” about your body and you should use protection), or a GREEN light (you’re infertile).  The more you use it, the less red days you see because the computer adjusts to your own cycle. 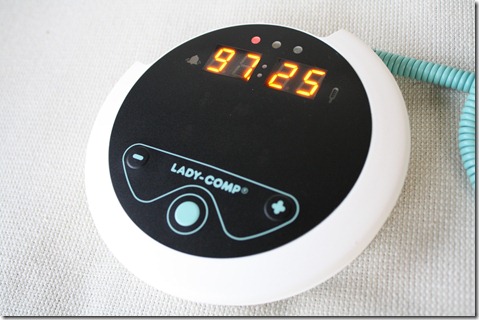 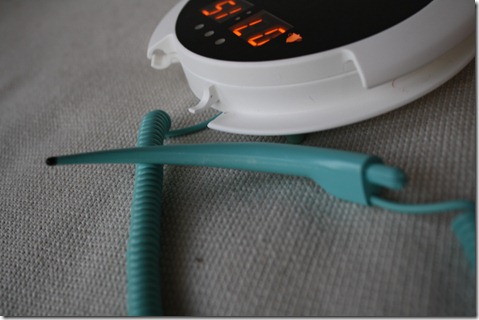 Now, Lady-Comp is expensive ($484 on the Naturally for Her site), BUT – I think it’s worth it and would have bought it with my own money if it wasn’t a sample.  I love, love, love that there is no pen and paper involved and that I don’t have to stare at my temperatures trying to figure out if I’ve ovulated (it’s like seeing the forest through the trees).  The lights take out all the guess work (we’ve begun just to rely on the Lady Comp now) plus it allows me to see my fertile status for up to 6 days, or review my past temp readings.  Also, it wakes you up with an alarm so there’s no more forgetting to take my temp.

Also, it’s much better than the FemCal application because I still had to deal with two pieces of equipment (the thermometer + iPhone).  The thermometer is attached to the Lady-Comp and does all the work of inputting the data for you.  Plus, my birth control was $30 a month so the machine pays for itself in 16 months, and it lasts about 10 years.

The coolest thing about the Lady-Comp? When we do want to get pregnant, we have unprotected sex on red light days, and hopefully, we’ll get preggers right away!  So you can use it to avoid pregnancy or achieve it.  Naturally!

All in all, so far I am really pleased with the FAM method.  We’re not pregnant (yay!).  And I have to say that after the initial BC withdrawal, my body definitely evened out naturally and I feel more normal than I ever did on the Pill.  I had my second non-Pill period last week and for the first time in my life, I did not experience ANY PMS symptoms.  NOTHING!

I know the Pill isn’t evil – it’s a great option for many women, and I know it has helped women with PCOS, etc.  And I definitely wouldn’t have gone off the Pill in college or marriage (and obviously neither method protects against STDs).   But it was no longer a good choice for me, and I’m so glad the blog world opened me up to the FAM method.  I had so many misconceptions about it (I didn’t think it was grounded in science at all!).  There are lots of alternatives out there to explore as you enter different lifestages.

Anyone else out there using the FAM method?  Do you rely on pen and paper, iPhone apps, or something more sophisicated like the Lady Comp?  What concerns do you have about birth control?