Thanks for all your support about my three new dietary changes.  I really appreciate it!  I truly believe the best way to make any health change is to do it little by little.  Small changes add up!

Lunch was amazing.  And so healthy!  I love when you finish a meal, and you just feel healthier right away. 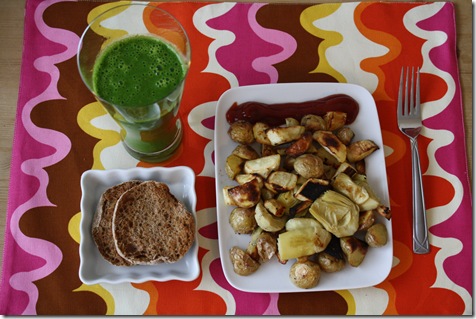 All I wanted for lunch was a big plate of roasted veggies.  I roasted several servings of yellow potatoes, parsnips, and jarred artichokes, which I dipped in ketchup. Mmm. 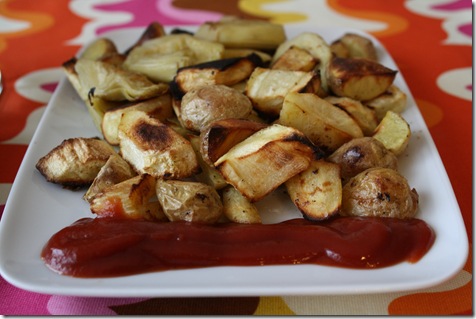 On the side, I had a whole wheat English muffin (I really like dry toast, in case you’re wondering why I didn’t put anything on it): 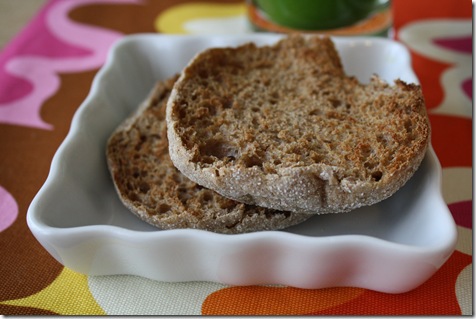 And a BIG Green Monster, which contained 1/2 a banana, 2 cups raw spinach, and 1 cup almond milk. 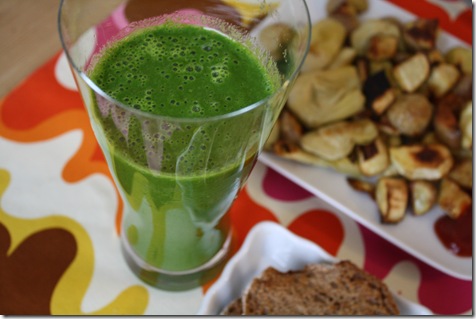 My lunch was missing some protein, so I’m going to have a protein-rich snack before going on a run later (it’s raining so biking is out of the question).

I recently received the following email from a reader, and I thought it would be a good topic to discuss on the blog (I asked her if I could share it).   She wants to know how to handle a boyfriend who smokes cigarettes.  Because in real life, smoking is not sexy – even if the Marlboro Man makes it look hot.

She wrote, “My boyfriend and I have been together almost 4 years. He was a smoker when we started dating (he began when he was 17, he is now 24) and due to my urges has stopped multiple times.  He would stop for a few months, start back up secretly, and it wouldn’t be too long before I found out. Of course, each time, I was extremely upset and kept telling myself next time would be the time he quit for good.  Last year, he quit again, this time because he was given an ultimatum – the cigarettes or me. (I know, I’m horrible).  It had been at least 9 months and I thought we had won the battle. I even bragged to family and friends about how proud I was.

This week, I found a pack in his jacket pocket. I asked him if he was smoking again and he said "No"  and denied it over and over. I waited a few minutes, asked again, and he finally admitted it. I lost my cool, cried like a baby, and headed to my mom’s house to crash.

He has apologized and told me I don’t understand how hard it is. I know I don’t understand, but I do understand he was dishonest with me, did not fully take my feelings into consideration, and put our relationship in jeopardy. I know it IS an addiction, but he needs to decide what is more important to him.

Am I a terrible person? Is it wrong for me to not want to commit myself (marriage for example) to a man I love more than anything, because I couldn’t stand to see his addiction take his life?  Any input would be appreciated. I really don’t know who else to ask, especially since most of the people I’ve spoken to aren’t the most "health-conscious".

Any former smokers (or current smokers) out there want to offer some perspective to the reader?  Do you love a smoker?  Would you issue an ultimatum about quitting smoking?  Can you ‘force’ someone to quit or do they have to be ready?  Any tips for quitting smoking?

I would really appreciate it if people can be considerate to the reader and to smokers in general.  Smokers are not bad people just because they smoke.  It’s an addiction like any other! (And I’m willing to admit that I have been a social smoker in the past, although not heavily or recently, so I sympathize with both camps.)

UPDATE:  Our lovely reader wrote back after reading 114 comments.

She wrote, “It was definitely difficult reading stranger’s comment on my life and choices – but in a good way.  Anyway, I first want to say how blown away I am by the number of responses, but also how touched I am. Some comments literally moved me to tears. Here’s what I have to say:

Many people mentioned that I knew he was a smoker going into the relationship: You’re right. I did know he was a smoker when we began our relationship. However, think about the beginning of ANY relationship – things change drastically over the course of time and things you never thought you would care about, you may now be very passionate about. When we began dating (I was 17, he was 21) I would have never really thought 4 years later, we would still be going strong. All I can say is you look at things differently when looking at them in terms of the long-run.

I’m not saying my boyfriend’s smoking is the only thing I concentrate on. There are so many wonderful things about him that I could create a blog just about HIM and never run out of great things to say. (Corny, but true). That is the exact reason I don’t want to simply walk away from this relationship. Because I feel so strongly, I felt I needed to exhaust my every option before considering throwing in the towel. Ironic as it sounds, that is how much he means to me.

I really do appreciate the comments from ex-smokers and those who have been in my situation as well. I realized that an ultimatum only produces extra stress, but I suppose I believed the stress of losing me would far outweigh the stress of quitting. Seeing what my boyfriend has gone through, I would never belittle or underestimate the process of quitting smoking, and I know I will never understand how it feels. So thank you for making me see his side of things a little more clearly.

As many readers pointed out – I DON’T have the right to force my beliefs on anyone, but I DO think I have the right to be clear and completely up-front with the man I may be spending the rest of my life and having children with. I believe love and commitment is about bending for one another, and sometimes that involves life changes.

Ultimately, what I have thought about/decided after reading all of the much-appreciated comments, is that I need to be calm and collected, and instead of "threatening" him, I need to work with him. He definitely needs to be honest and perhaps the reason he hasn’t been previously is because I am so hard on him. I think I have known this all along, but have refused to admit it to myself because I felt I had no other choice.  It is still going to be a struggle but with the help of amazing, supportive women like you, I have a feeling it just got a lot easier 🙂 Thank you, thank you, thank you.

PS – I once broached a similar topic on what to do if the man (or woman) you love is unhealthy.