I made a fun quinoa strawberry mash this morning for breakfast.  I even topped it with a tablespoon of almond butter (I have thing against nut butters on warm oatmeal, but for some reason decided to try it today)! 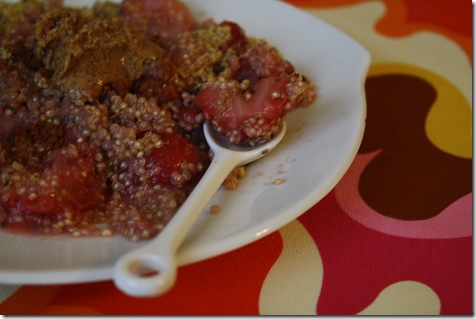 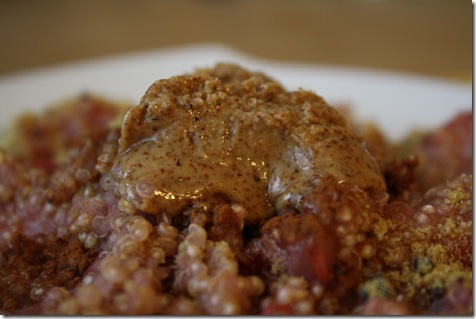 To make the mix, I just cooked the first three ingredients together for about 8 minutes.  Ta-da!  So easy.

Last night, I mentioned that I am going try to implement three changes in my diet.  In the past month, I have been experiencing physical and mental symptoms that alerted me to the fact that I’m doing something wrong.

I’ve dropped a few hints here and there, but I’ve been struggling emotionally for the last month.  There’s a few issues in my personal life that cannot really be discussed on the Internet that are causing me anxiety, stress, and sadness.

Perhaps as a result of these emotional struggles, my physical health has started to suffer.  I’m having a lot of trouble sleeping – I have issues falling asleep, staying asleep, and feeling rested when I wake up.  As a result, I’ve been pounding coffee and tea in throughout the day, which in turn creates really bad headaches.  I’ve been drinking more beer than usual, too – sometimes just for fun with friends, but also sometimes to just deal with my emotions.

For an endurance athlete who has been exercising 5 – 8 hours a week, not getting enough sleep is REALLY, REALLY bad.  I’ve felt like a walking zombie, had trouble concentrating, struggled with my writing, and cried at the drop of a hat.  This is not working!

One of the awesome things about Chinese medicine is that the doctors believe your emotional state has a strong impact on your physical health, which is obviously true for me right now!   Last night, the doctors recommended that I make three small changes to my diet, which they believe will improve my physical health and make it a lot easier for me to handle my emotions.

SUGGESTED CHANGE #1:  Drink warm water upon waking, and drink more warm/lukewarm water throughout the day.  All of the doctors believe I am dehydrated, which is compounding my sleep issues and making me irritable.  Although I drink enough water during exercise, I’m not drinking nearly enough during the day, and I’m counter-acting my water consumption by drinking so much caffeine.  By starting the morning off with a cup of warm water, they say I’ll ‘prepare’ my stomach and intestines for food and it will be easier to digest breakfast.

MY THOUGHTS:  This is an easy change that I can make without much effort.  I’ll give it a shot!  And I probably am dehydrated because I often wake up thirsty.

SUGGESTED CHANGE #2:  Reduce the amount of caffeinated beverages, especially coffee.  I’m dehydrating myself and adding to the vicious cycle of lack of sleep by artificially keeping myself alert during the day.

MY THOUGHTS:  Although I never plan to give up coffee or tea entirely, I can understand why the amount of coffee/tea I’ve been drinking is probably not a great idea.   I am going to try to cut back in hopes of improving my sleeping patterns.  If I need a pick-me-up in the afternoon, I’ll go for a short walk.

SUGGESTED CHANGE #3:  Eliminate dairy products.   The doctors suggested that eating cold, damp foods like dairy impedes my ability to process and transform the other foods I’m eating into a viable source of energy.  As a vegetarian, I use dairy products frequently as a meat replacement and source of protein – sometimes eating dairy three times a day (I thought the doctor was going to kneel over and die when I said that).   They also I start eating more fish.

MY THOUGHTS:  I do not want to eliminate dairy from my diet the way I eliminated meat.  I went Vegan for a Day for the blog and found it very hard to eat a completely dairy-free diet.  I take pleasure in a lot of dairy products (cheese, yogurt, ice cream) and do not want to be a vegan at this point in my life.  However, I can understand that I perhaps eat too much dairy.  I’m going to try to slowly reduced the amount of dairy in my diet so that I’m eating one serving a day on average.  I’ll have to get creative and find new ways to get my calcium and protein, but vegans all over the world do it every day, so it won’t be that hard.

Oh, and in regards to the suggestion I eat more fish, I told them I was a vegetarian and there was no way I was going to eat fish.  Instead, they suggested eating more eggs.  I like eggs!  🙂

Has a doctor ever recommended you make a dietary change?  Did you take their recommendation at face value or do a version of the “my thoughts”?  What’s the most pivotal dietary change you’ve ever made?