A pretty presentation makes a meal so much more enjoyable, don’t you think? 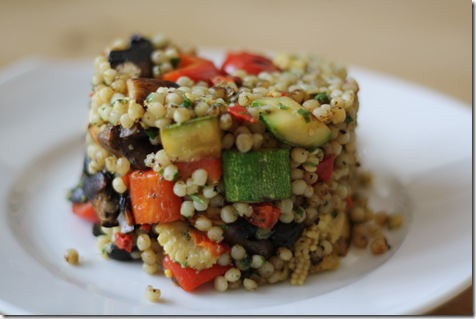 For lunch, I bulked up some pre-made Israeli cous cous adding a bunch of stir-fried veggies, like mushrooms, zucchini, and red peppers. 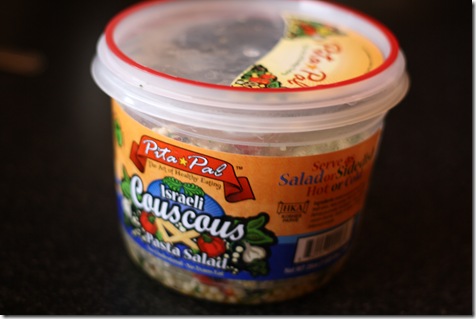 I’ve only eaten the Israeli cous cous (from Costco) cold, but the package says it can be eaten hot.  It was SO good with the extra vegetables.  I think I do prefer it cold, though. 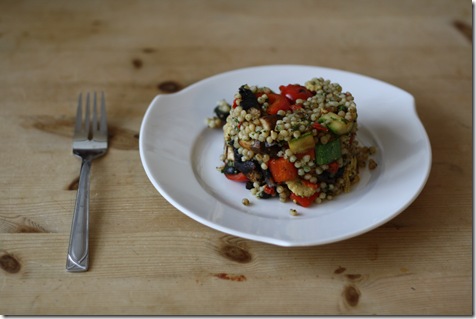 I like to put my food into little towers just so I can knock them down! Weeeee. 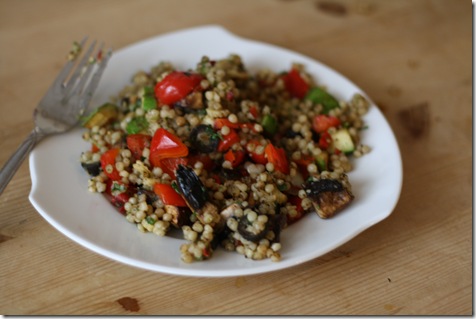 I am 5 years old on the inside.

In other news…. my desk is a disaster, which is not conducive to creativity at all. 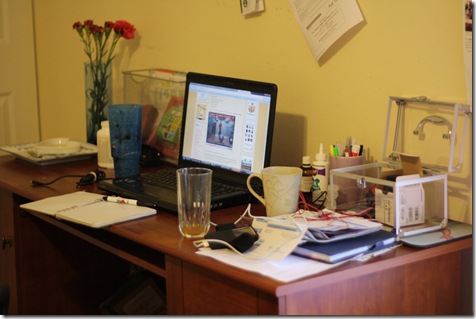 Last night, I got an e-mail from Laura, who said:

I just became a full-fledged vegetarian after this past Thanksgiving; last year’s turkey day was my last "hoo-rah" so to say. I know that you, yourself, are new to the vegetarian world as well. As Thanksgiving approaches, I realize that it is going to be a lot harder this year to eat during Thanksgiving. The whole rest of my family eats meat, so I do not want to make them cater to me. Do you have any suggestions for dishes/sides that are vegetarian and Thanksgiving day friendly? I think it would be a great question to open up to the blog world. I feel like they would have a lot of experience with this type of thing!

The Husband and I were actually just discussing this issue!  I became a vegetarian on April 26, and the Husband went veggie a few weeks later.  He eats meat about twice a month (usually at restaurants), but he said he doesn’t want to do Turkey Dinner.

Last year, my Thanksgiving meal consisted of the following items: This year, I’ll have to steer clear of the turkey, gravy, and stuffing, at the very least.

I’m thinking about bringing a pot of Butternut Squash soup as my “vegetarian entree” – with enough to share with the entire family, if they wish.  There are so many good vegetarian side dishes that I have a feeling there will be MORE than enough to eat if I forgo the turkey.

Your other option is to bring a Tofurky.  :)  But that freaks me out.

What if your family is not accepting of your vegetarian choices – or your HEALTHY choices?  I know a lot of people try to start arguments with me about being a vegetarian (which is so annoying when you’re already at the dinner table).  I remind myself that sometimes people feel as if you are judging them, even if you aren’t, when you choose to do something differently than what they do.

So, whether you’re just choosing to avoid the second serving of pie or the entire turkey, I think the best response to someone getting all up in your face about food choices is a polite smile and a calm, “Let’s talk about this later, shall we?” Then – disengage.  Go help out in the kitchen or slam a glass of wine.  🙂

Did you know that approximately 45 million turkeys are killed, cooked, and eaten in the U.S. on Thanksgiving, about a sixth of all turkeys sold in the U.S. each year?  That’s a LOT of turkeys – and most of them are raised in factory farms.  🙁

If you want to eat turkey on Thanksgiving, consider buying a locally-raised turkey instead of a farm-factory turkey.   You will be supporting local farmers, helping the environment, and (most likely) eating more humanely raised and slaughtered meat.  You can find a local turkey farm using this site (pretty cool!) – I found half a dozen farmers in my area easily!

Next post: Things I Need To Do More Often #17