I received a frantic phone call from the Husband around 6:45.   🙁 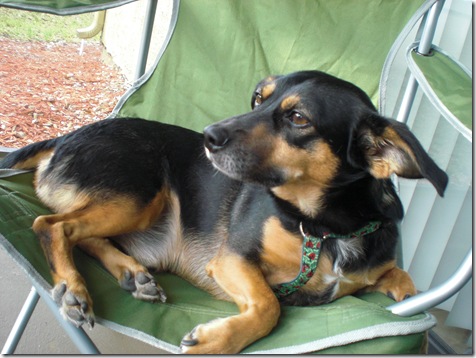 James was throwing up blood and had severely bloody stool.  I told the Husband to rush James to the Doggie ER, and I meet up with them not 5 minutes later.

James has a bacteria overgrowth in his intestines and is hemorrhaging internally.  He’s dehydrated and his red blood count is through the roof.  The vet said that we’re lucky we caught it early – too many pet owners would’ve hoped it would improved on its own – and he “should” be OK.

They’re keeping him overnight for observation + IV treatments.  I get to pick him up at 6:45 AM and transfer him to our regular vet.

UPDATE at 11:00 PM – Vet called and said James had two more blow outs around 9:45 PM.  “Blow outs” are way too descriptive.  :(  Running tests now and will be back with a red blood count update.

UPDATE at 11:46 PM – Called back the vet.  Blood work indicates he is slightly more dehydrated than before, but is generally stable.  No more blow outs.  Everyone at the vet loves him.  We miss him.  :(  Watching The Mummy and trying to stay awake.

UPDATE Tuesday at 6:00 AM – We called the vet at 1:00 AM and was informed he was awake but tired and had not experienced any more blow outs.  Through the night, we didn’t get any phone calls, which is good.  We’re going to pick him up now and transfer him to our regular vet.  Thank you so much for your comments and tweets.  Knowing other people were sending out positive vibes for us was so helpful.

Previous post: The Operation Beautiful Contest — You Could Be in the Book and Win Amazing Swag!