CHECK OUT Andrea’s blog, Off Her Cork, for my Feet on the Street interview!

Today is going swimmingly!  Lots of work, and lots of good food!  Let’s get to it already, shall we?

My mid-morning snack was a lovely orange. 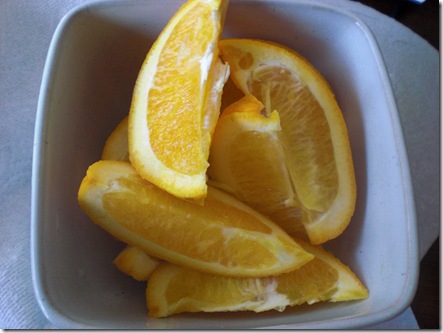 And lunch was a hummus and turkey wrap with a side of melon, celery, and carrots. 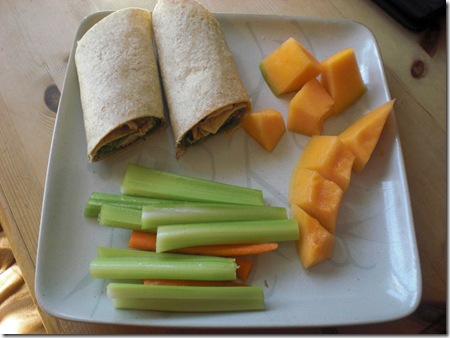 Mmmm, hummus is the perfect glue for a wrap! 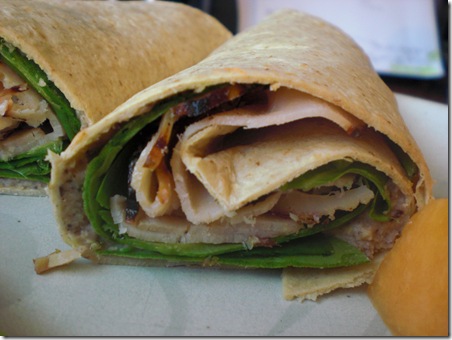 Here are the answers to the questions from this AM’s post!

My favorite fruit is probably banana!  I love it in oatmeal (obviously) and eat it almost every day.  Plus, it’s highly portable and requires no washing.  Score.

I believe you can lose weight without dieting by focusing on nutrient-rich, low-calorie whole foods.  If you eat a balanced diet of lean protein, complex carbs, fruits, veggies, and healthy fats, it difficult to overeat (in comparsion to the average American diet).  I think you can eat anything in moderation, but the one food I would recommend avoiding is restaurant food.  Eating out is the surest way to blow your healthy diet, as portions are out of control and most things are loaded with hidden butter, etc.

I answered a similar question about training programs a few weeks ago in this post — check it out!  Also, here is an old post with a list of recommended training programs.  I think it’s important to view exercise as a natural part of your day, like brushing your teeth or taking a shower.  I usually view it as a "commitment" to myself, and as a result, I rarely miss workouts.

My favorite aspect of blogging is meeting readers and other bloggers in real life! It’s so exciting.

Sarah, I want to answer your question in detail, so I will dedicate a whole post to it later in the week!

I don’t have any good luck charms, but I do wear an excessive amount of gear.  It’s getting borderline ridiculous:  CamelBak, RoadID, knee sleeves, iPod, Nike + iPod, heart rate monitor…. it takes me like 15 minutes to get dressed for  a long run these days!

Mine is definitely Anne’s Organic Macaroni and Cheese — DIVINE!

I’ve only gotten a few cramps while running, actually.  According to this website,  researchers believe that the side stitch is caused by stretching the ligaments that extend from the diaphragm to the internal organs, particularly the liver. The jarring motion of running while breathing in and out stretches these ligaments. Runners tend to exhale every two or four steps. Most people exhale as the left foot hits the ground, but some people exhale when the right foot hits the ground. It is the later group who seem more prone to get side stitches.   Exhaling when the right foot hits the ground causes greater forces on the liver (which is on the right side just below the rib cage). So just as the liver is dropping down the diaphragm raises for the exhalation. It is believed this repeated stretching leads to spasms in the diaphragm.  To prevent a side stitch, take even, deep breaths while running. Shallow breathing tends to increase the risk of cramping because the diaphragm is always slightly raised and never lowers far enough to allow the ligaments to relax. When this happens the diaphragm becomes stressed and a spasm or "stitch" is more likely.

No! I haven’t! That’s crazy.  But, did you know that Abebe Bikila (from Ethiopia) set a new marathon world record at the 1960 Olympics…. and he ran the race barefoot!

I am actually a horrible person to answer this question because I hardly ever weight train, and when I do, it’s only upper body.  I do arm exercises about 2 times a week. I do bicep and tricep curls and then throw in several random arm machines.  I hate to do lower body work because it KILLS my crappy knees.  I fit in lifting on cross training days because the cardio aspect of my workouts are usually shorter on those days.

Wow, this is a really good and thought-provoking question!  First of all, I’d like to say that Pittsburgh was named 2008’s Most Livable City because it’s a really great town.  There’s lot of culture and pride, and the city is definitely revitalizing itself.  Pittsburgh does have many healthy food options.  Some of my favorite places to eat included Harris Grill and Spice Island Tea House, both of which have healthy options.  But you’re right, Pittsburgh is "famous" for many unhealthy treats, like hot dogs and the Primanti Sandwich, which consists of fried deli meat, cheese, French fries, and oily coleslaw jammed in between two slices of white bread (it’s amazing).   I do think the city’s dining options are slowly improving, but I also think many places in Pennsylvania (outside of Philly) are "small town" in mentality and don’t experiment with too many "new" foods (based on my friends’ eating habits who are from said small towns; this is a generalization though).

I found it difficult to eat well in college because I was partying all the time.  :)  I lived in P-burgh for one year after graduating, and I found that I could find healthier options at many restaurants, just not the bars.  It would be great to see some of the local hangouts incorporating more healthy food options in their menus!

The hardest part for me is staying mindful of what I say or write.  I can be a very opinionated person, and although I like to stay "true" to myself on the blog, I don’t want to insult readers.  So, I do censor myself a little bit, based on prior complaints.   The easiest part is taking pictures of my food.  You would think it would be time-consuming and irritating, but once you get into the habit, it’s no big deal!

Have a great afternoon!  And look how pretty my Valentine’s Day roses are turning out! 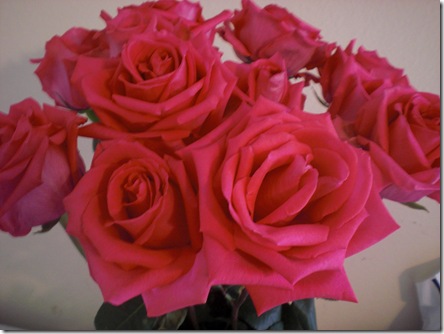