Michael Phelps: To Bong or Not to Bong?

That is today’s question!

But first, breakfast.  I had banana oatmeal. 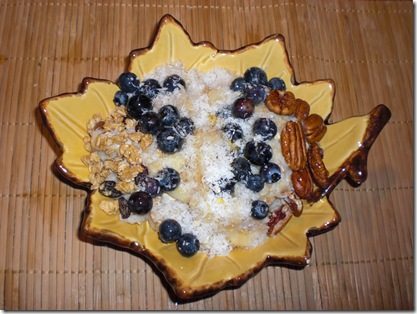 With a crazy amount of toppings!  My oatmeal contained: 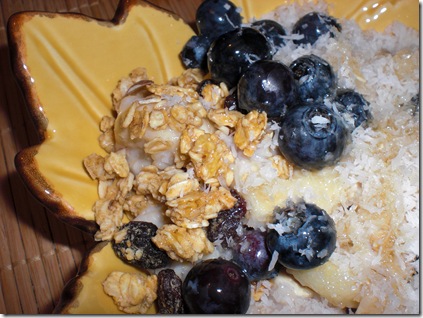 Whew!  It was delish.

The Bong Shot Heard Around the World!

I’m sure by now, most of you have heard about this picture or actually seen it for yourselves:

Michael Phelps, the US Olympic swimmer and winner of a record 8 gold medals at Beijing in 2008, was photographed smoking what is undoubtedly pot at a college party in November.

After the photo was published in News of the World (the Brits always get the good dirt), Phelps issued that following statement: "I engaged in behavior which was regrettable and demonstrated bad judgment. I’m 23 years old, and despite the successes I have had in the pool, I acted in a youthful and inappropriate way, not in a manner that people have come to expect from me.”   He promised it would never happen again.

According to news outlets, Phelp’s major corporate backers, which include Speedo, Omega, Visa, Subway, and Kelloggs, have so far remained supportive.

This isn’t the first time Michael has been involved in controversy — he was also arrested for a DIU at 19 years old following the Athens Olympics.  He was sentenced to 18 months probation.  Following his sentencing, Phelps stated: ""I recognize the seriousness of this mistake. I’ve learned from this mistake and will continue learning from this mistake for the rest of my life."

My opinion is that Phelps behaved in a stupid manner when he smoked pot in front of strangers — he should know by now some people are looking to take advantage of him.  Secondly, I think his young age/fame probably caused him to act out following Athens AND Beijing.  I can only imagine the tremendous pressure he is under and his desire to "let loose."

However, I do think he needs to behave in a more responsible manner overall.  This type of behavior is highly inappropriate for a professional athlete.  Frankly, the DUI tarnish on his record is a bigger deal to me; I feel like he’s not learning from his mistakes.  If he loses a corporate sponsor or two, maybe it’s for the best.

Of course, since he tested clean from illegal drugs and preformance-enhancing drugs during the Olympics, I do NOT think he should be stripped of his medals.  There isn’t enough evidence for that, anyway.

What do you think of the Michael Phelps controversy?  People seem to waver between burning him at the stake and wanting to give him a high-five.