Morning!  One thing that always gets my blood pressure boiling is when I wake up and discover my internet is not working.  It’s not only an inconvenience, it’s a major issue for me because I work from home.  I spent about half an hour fiddling with it before I realized that I have internet, my work router just isn’t working. 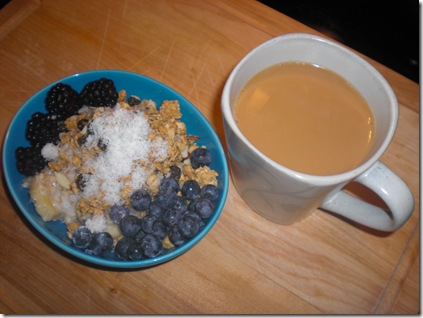 One side was BLUE… 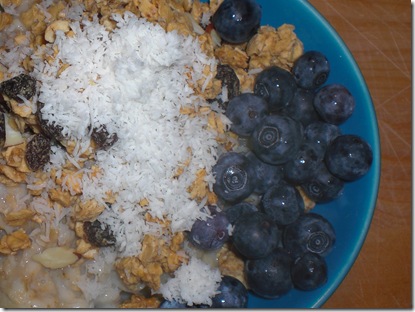 And the other was BLACK… 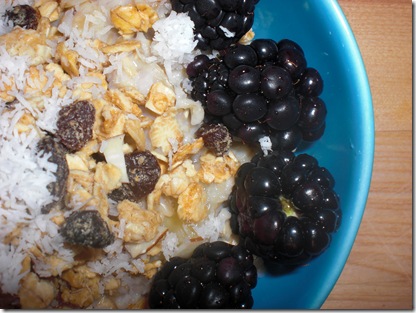 And the middle was all granola and coconut sweetnesss.. 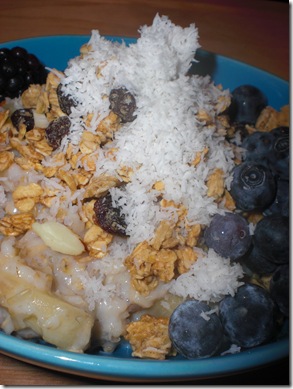 Too Much of a Good Thing?

While trying to figure out my work computer, I read an article from the New York Times, which is entitled "What’s Eating Our Kids?".  It’s about parents projecting their own orthorexia  onto their kids.  Orthoerxia is the term doctors have coined for a patient who is "too focused" on eating "healthy" or "good" food, at the expense of their general well-being.

"While scarcely any expert would criticize parents for paying attention to children’s diets, many doctors, dietitians and eating disorder specialists worry that some parents are becoming overzealous, even obsessive, in efforts to engender good eating habits in children. With the best of intentions, these parents may be creating an unhealthy aura around food."

"….Dr. Steven Bratman of Denver has come up with a term to describe people obsessed with health food: orthorexia. Orthorexic patients, he says, are fixated on “righteous eating” (the word stems from the Greek word ortho, meaning straight and correct)…. Many eating disorder experts dispute the concept. They say that orthorexia, which is not considered a clinical diagnosis, is merely a form of anorexia nervosa or obsessive compulsive disorder."

The article goes on to state that whether or not orthorexia is an eating disorder or a form of OCD, imposing rigid eating beliefs on children is damaging, as it teaches them to form a "moralistic, restrictive and unhappy relationship" with food.   Many children of so-called orthorexics develop body image issues, anorexia, or bulimia.

I get SO nervous when I think about having children because I don’t want to accidentally "steer" them in the wrong direction.  I think it’s important to not label food as "good" or "bad" and just encourage moderation.   But…. I know I’ll be concerned about my child’s diet and will cringe if they eat something with trans fat it in (that’s just me being honest!).

But — at the same time — I’m torn.  Because you know how kids are… they want candy bars, they hate vegetables, they love chicken fingers.  And maybe my kids will be picky eaters who refuse to eat anything that’s not our of the box!  How do I explain to them that certain foods are more worthy of consumption than others, even if they don’t taste as good?!

How can we encourage our kids to have a healthy and positive relationship with food without going overboard?

Next post: I’m Stuck in a Glass Case of Emotion