My mid-morning snack was Grape Nuts and milk. 🙂 I don’t think my oatmeal held me over as well as I would’ve liked. 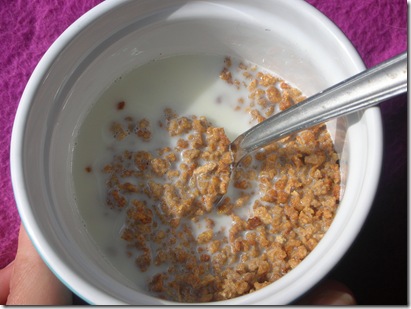 And I’ve been CRAVING veggies since my booze-filled bachelorette party this weekend, so I made yet another big side salad to go with my lunch-time sammie. 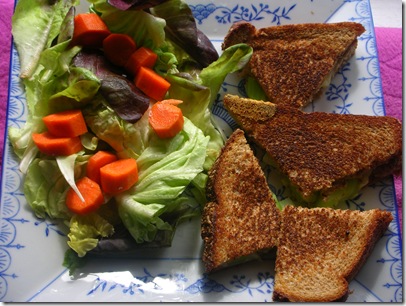 Grilled cheese doesn’t have to be boring — you can put almost any veggie inside and make it special! I like tomatoes, sprouts, zuchinni…. and…. 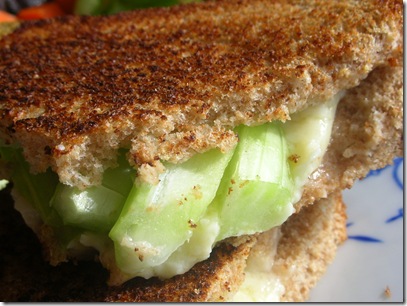 Celery! MMM Cheddar cheese and celery go so well together.

Have you heard of companies sponsoring weight-loss contests at work, a la The Biggest Loser?  My BFF’s company does it and her boyfriend (also at the same company) always wins the final prize (apparently, he takes a poop and loses 5 pounds, so he holds it in for the first weigh in and always poops before the final weigh-in). LOL!

As summarized in this article, a recent study analyzed how cash incentives influenced weight loss among 57 people who were obese but otherwise healthy. One group of dieters was given $3 a day plus additional matching funds for meeting weight loss goals, meaning they could earn up to an extra $168 during a four-week period. A second group was eligible to compete in a cash lottery for $10 to $100 a day during the study period if they achieved weight loss goals. A third control group simply attended monthly weigh-in sessions.