After work, my friend Harry and I did a little shopping (Future Husband is out of town on business). Harry’s one of the groomsmen and needs some nice new shirts for the rehearsal dinner and after party. I love shopping with boys; it’s so easy and fun!

We were hungry after shopping, so we went to Pei Wing Asian Diner.  It’s the cheaper version of PF Changs and so, so, yummy.

I ordered the Orange Peel Chicken rice bowl, which was really more like a PLATTER! 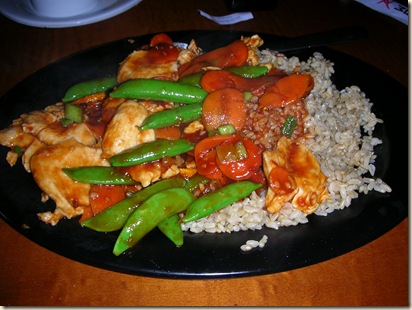 Normally, a serving of this dish (each dish has TWO servings, according to the web site’s nutritional info) has 520 calories and 18 grams of fat.. and that’s ONLY the meat.  They also serve up two 170-calorie portions of brown rice.  If you eat the whole thing, that’s 1,380 calories! Eckkkkk!

I ordered the dish "velvet," which is the special Pei Wei lingo for "not fried." (Don’t ask me!).  Instead of battering the meat in the glaze and then frying it in oil, it’s just stir-fried on the stovetop and the sauce is drizzled on top.  I ate half and brought the other half home.  I’d guess my non-fried portion, including the rice, was 570 calories or so.  Portion control and making special requests are key to navigating restaurant eating, in my opinion!

When we got home, I had a few jelly beans. 🙂 Naughty, naughty. 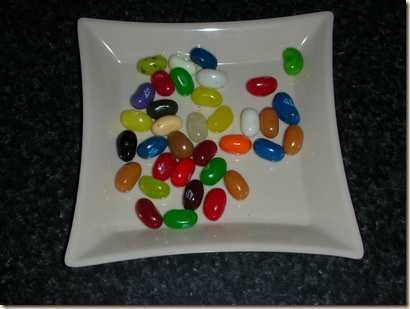 We’re outrageously low on grocery.  I’ve been hoarding the last banana for tomorrow’s breakfast, and then… no more fruit.  Time to go to the store! 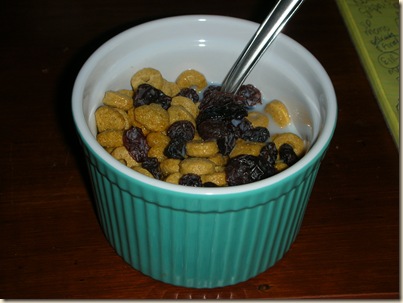 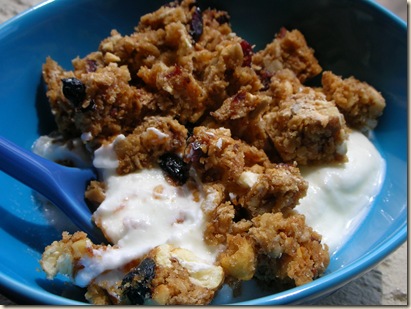 I have tomorrow off.  I’m going to yoga around 8:30 AM, and then I’m going to do a little work (I can’t ever be off entirely), pack my things, and drive to Jacksonville.  I’m meeting my paps for dinner and staying with my mom in her hotel room.  Then… Saturday is race day! I’m going to stay overnight in Jacksonville on Saturday night, too.  Don’t worry… I’ll have Internet access all weekend long! 🙂

Have a good night!