Good evening, everyone! I thought I’d slip in a quickie post before Future Husband, Lisette, Danny, and I go out.  We’re going to Coconut Grove (the trendy bar and club part of Miami, besides South Beach) for some brew-hahahas.  Obviously, I’ve pretty much been drinking non-stop since Thursday evening.

In fact, I’ve had more alcohol in three days than I probably have had in the last two months. It’s not that I feel guilty or anything for drinking, it’s just—not typical behavior for me anymore!  I used to drink so much (and so frequently) in college, which was the key factor in the 10 extra pounds I used to carry around!

It’s fun to indulge with friends every now and then…. but I am looking forward to getting back to normal eating habits! 🙂

So, this afternoon Lisette and I played some Wii (soooo fun), drank a little wine, and consumed some Italian bread with EVOO dipping sauce. 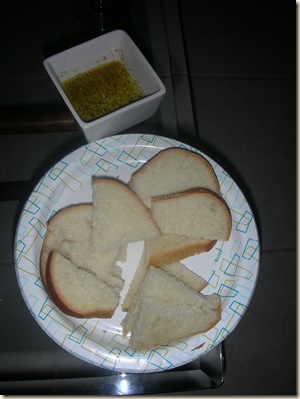 And…. then we TOOK A NAP! When Lisette and I were in high school and college, we used to take naps together all the time… so it was kind of like old times!  Is that strange? I love snoozing with my friends–it kind of feels like a sleepover.    Napping together is better than napping alone! 🙂

After laying in bed for two hours, watching chick flicks, and sleeping off our hangovers, the husbands came home.  The football game went well (GO CANES!).

I had a small toasted sammie with turkey + cheese for dinner.  To squeeze some fruit in, I had a small banana, too.  I wasn’t too hungry after all the beer and snacks. 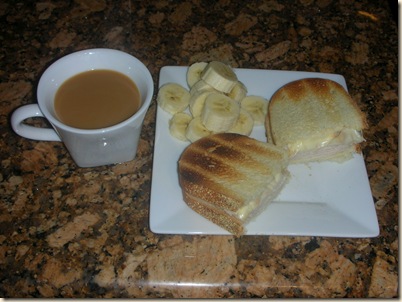 Side note: doesn’t Lisette have the most beautiful countertops? I’m super jealous!

OK — off to the bars!  I’ll post the shenanigans tomorrow, I’m sure! :)  Have a fun and safe evening.