Before I get into the rest of the day’s post-Half Marathon eats, can I just say how totally awesome the blogging community is?  Really! Your kind words of encouragement definitely kept me going during the race, and it’s so nice to hear that my experiences motivate you–because I read YOUR blogs (if you have one!) or comments and I get motivated as well!

Basically, you all ROCK.  I hope we can all meet one day.  Maybe I should organize a blogger conference?! How AWESOME would that be!

Enough of the mushy stuff. Let’s be frank…. I wanted to STUFF MY FACE all day long.  Every hour or so, I would announce to my mom, "I am hungry… AGAIN!" and she would just laugh and throw up her hands.

After my morning post, I took a nap (I dreamt about RUNNING, of course).  I woke up after an hour STARVING and immediately reached for a Chocolate Brownie Z-Bar. 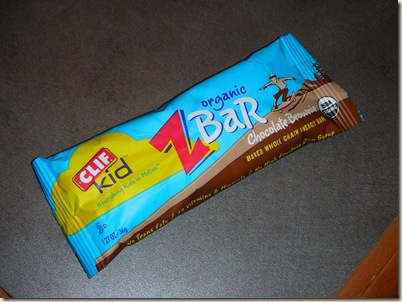 I love Z-Bars.  I want to marry a Z-Bar and become Mrs. Caitlin Z-Bar.

I met up with my mom and some family friends for a day of relaxation and fun.  We basically just hung out and chatted.  Around 3:30, we went to the Golden Corral Buffet.

Now, buffets typically freak me out because portion control is so difficult–I want to get my money’s worth and have the urge to fill up my plate! So, I developed my "buffet game plan" before I walked in… I knew I needed (1) protein; (2) carbs; and (3) VEGETABLES.   I also planned on doing a walk-through of the buffet before picking out my food.

I got a side salad with veggies and fruit…. 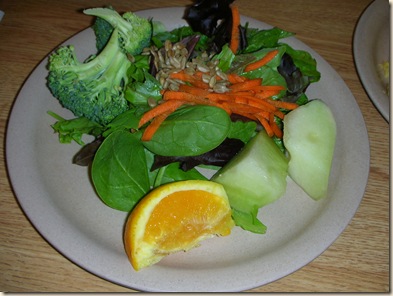 And I had a "southern dinner" from the hot bar. 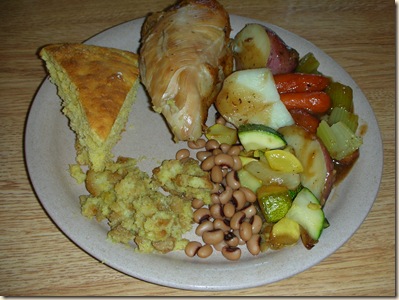 Clockwise from the top:  roasted chicken (I ate 3/4), steamed veggies in gravy; black-eyed peas; stuffing; and a slice of cornbread.

I was pretty excited for the dessert buffet because I love soft-serve ice cream, but the machine was broken and the other desserts didn’t look too appealing.

After some more socializing and sightseeing, we stopped at Starbucks for drinks.  I was HUNGRY (again) and thought it would be a perfect time to try the new Starbucks Oatmeal. 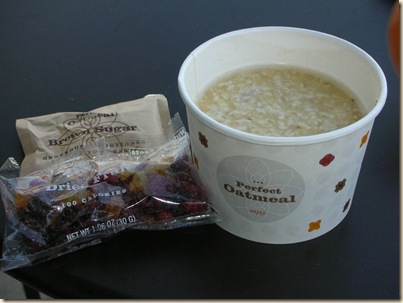 The verdict?  The mix-ins were AWESOME (I had brown sugar + dried mixed fruit) and the oatmeal was creamy and delicious! I would DEFINITELY get this again, say if I was on a road trip or something.  Way to go, Starbucks! 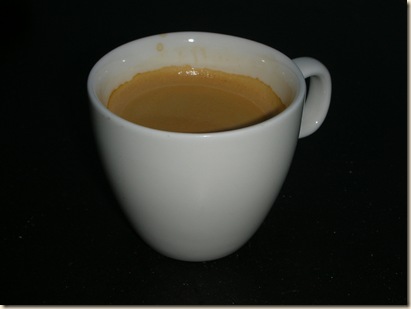 I was writing this post, I realized my stomach was still growling.  Even though I felt like I had been eating ALL day, I sat down and totaled my calorie intake. I’ve consumed about 2,645 calories.  Adding my non-workout calorie burn (1,800) plus the calories I burned during my race (1,230), I am about 385 calories short–MINIMUM.

This is why it is important to calorie count on hard workout days.  I certainly don’t want to lose body fat OR muscle.  So, I’m off to raid the vending machine, my food stash, and/or a nearby restaurant and get some more food in my belly! 🙂

Do any of you use calorie counting to make sure you’ve eaten ENOUGH?

Have a wonderful night! I’ve got a long drive back to Orlando tonight, so I’ll see you around lunch!