OoooooRAH! The Jacksonville Marine Corps 1/2 Marathon was a success–I beat my goal time by at least 4.5 minutes! 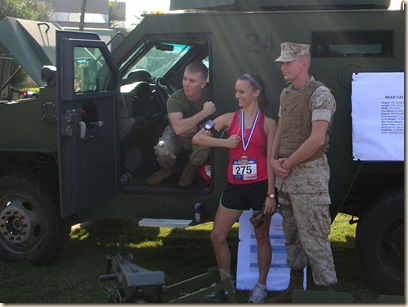 The course was amazing–we traveled over three bridges, traversed through beautiful residential neighborhoods, ran through the downtown district, and sprinted along a beautiful river waterfront.  My unofficial clock time was 2 hours, 6 minutes, and 30 seconds.  I haven’t received my official chip time yet, but I think it’s closer to 2 hours, 5 minutes. 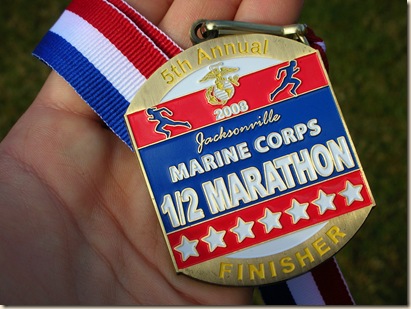 The race definitely presented many physical AND mental challenges.  Yet it was overall a wonderful race and I can’t wait to do it again NEXT YEAR!

My alarm clock went off at 4:45 AM (groan) and I sat down to a filling breakfast.  I had a PB sandwich, a banana, and a cup of coffee. 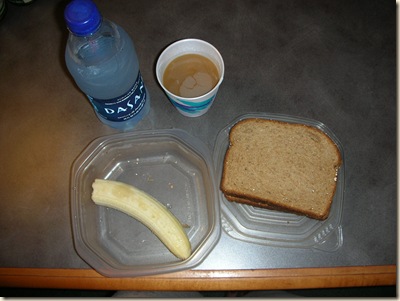 My mom and I drove to the starting line and I picked up my packet and chip.  There were about 1,500 runners (some were doing a 5K) and loads of Marines from all over the state.  I saw a bunch doing 100 push ups! OooRAH! (Yes, I’ve been saying, "OooRah" all day).

I safety pinned my mid-race snack to my pants before the race… Jelly Bellys! 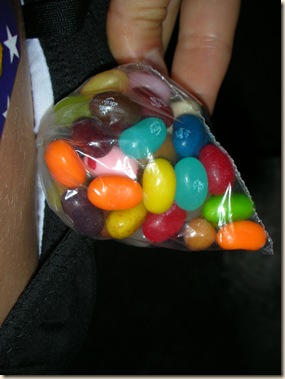 After the gun went off (yes, a literal gun), we began the race.  My race plan was to pace sub-10:00 miles because my overall goal was 2 hours, 10 minutes or better.  This pretty much translates into NO WALKING (except through water stations).

The first major challenge I encountered was crossing the first bridge…. which basically meant "a really large hill."  I haven’t run hills since I moved out of Pennsylvania a year and a half ago, so I was a little nervous.  Many people around me slowed to a walk immediately.  I decided it would be better to just power through the climb, as too much walking tends to make my legs feel like lead.

I paced mile 2.0 at 19:30 (clock time) and was very pleased.  I figured I was about 1 minute behind the clock, so I knew I was right on schedule.  After the 2.0 mile mark came the second large bridge, and again–I just tackled the incline instead of walking.

Miles 3.0 to 6.0 were uneventful.  I just focused on breathing and placing my foot properly.  My bum leg did not bother me at ALL! Whatever injury I suffered through for the last two weeks seems to be gone (cross your fingers!).

At each water station was a different form of musical entertainment! There were bag pipers, a DJ, a rock band, a country band, and a guy playing an electric guitar.  It kept things interesting. 🙂

After mile 5.0, the route started to loop back on itself, so the leaders were passing us.  The first man was on mile 9.0 when I was on mile 5.5!!! I cheered for each of the first 6 or so runners (all men) as they passed me.  Then, the first girl whizzed back and I went nuts, screaming "YOU GO GIRL!!"  She was flyyyyying!

At mile 6.0, I broke into my mid-race snack and ate about 1/2 of  my Jelly Bellys.  I felt the sugar rush about 5 minutes later!

Around mile 9.0, my mind started to wander a little bit.  I began to think about all the reasons I love to run.  The one thought that just kept coming back to me was that one day I won’t be able to do this–I may be too old or pregnant or injured or sick.  Every day that I can run, I am just so thankful for.

At mile 10.0, the volunteers were handing out packets of Goo. I grabbed a citrus flavored one, and I only ate about half.  I paced mile 10.0 at 1 hour, 38 minutes.  It was such a relief to see that I was still on schedule.

Between miles 11.0 to 12.0, I tried to keep my tempo even.  People around me were starting to falter like crazy.  I didn’t want to use of all my juice 1.0 mile from the finish line, so I tried to keep a steady, but strong pace. 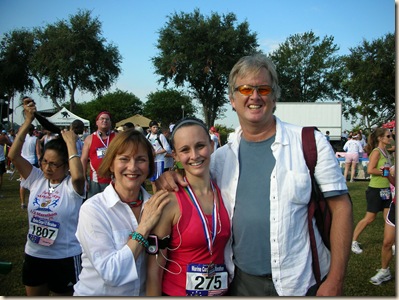 My parents were waiting at the finish line for me! They were kind of surprised to see me because I told them not to expect me until 9:10 or 9:15, and I showed up around 9:06! 🙂

Even though I had eaten two mid-race snacks, I crossed the finished line FAMISHED. I immediately grabbed a Powerade and drank about 1/2. 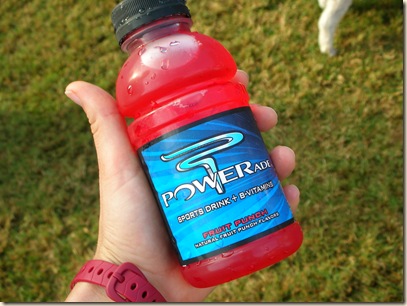 Then, I grabbed a 6-inch turkey sub and ate about 1/2.  I couldn’t decide WHAT I wanted to eat, and although I was hungry, my stomach felt a little off. 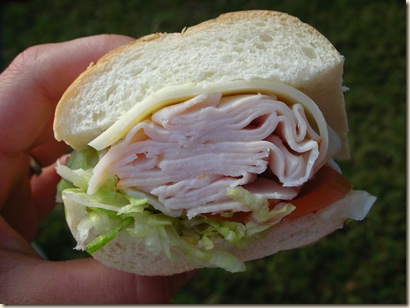 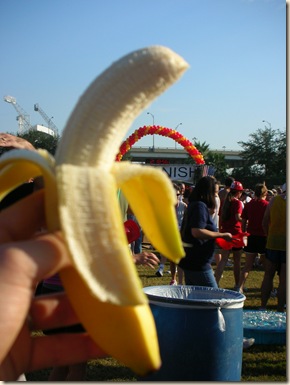 And…. then I felt like I was going to hurl, so I sat down in the grass and closed my eyes.  I managed to keep everything down. 🙂 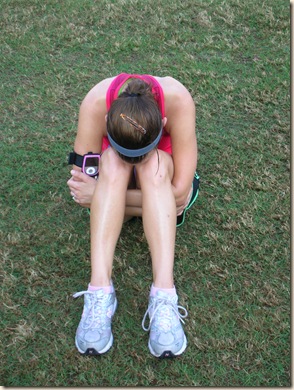 After we left the race, my parents and I went to Cracker Barrel.  I stared at the menu for about 10 minutes trying to figure out what to order.  I wanted EVERYTHING!!!!

In the end, I had two turkey sausages and an order of Egg Beaters. 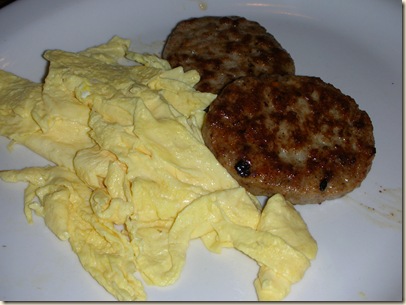 I also ordered three Pecan Buttermilk Pancakes and real maple syrup. The pancakes were AMAZING, but I could only eat 2. 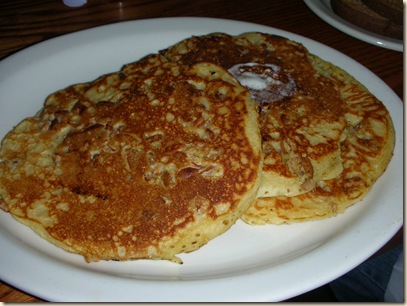 All in all, it was amazing race.  I nearly cried at the finish line because I was just so happy.  It floors me sometimes to think that 2.5 years ago, I couldn’t even run 1/4 a mile without stopping, and today I ran 13.1 miles without walking ONCE! Running is such a fun hobby because you can really see your improvements over time, and it’s just such a reward.

My next Half Marathon is in February.  I’m already counting down the days!! My new goal is to run a sub-2 hour Half Marathon.

I’m going to jump in the hotel hot tub for a few minutes, and then it’s NAP TIME!  Have a wonderful day!