I was a little sleepy this AM (I tripped over both dogs twice while stumbling to the kitchen), so it was a clearly a Double Shot Oatmeal day. 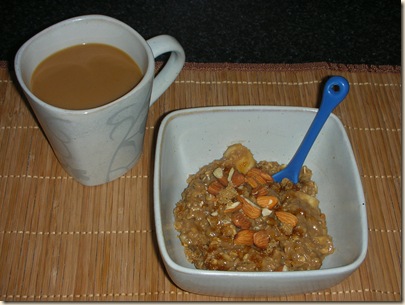 You may have noticed that I’m addicted to coffee.  I try to limit my consumption (everything in moderation, right?), but–LORD, oh LORD do I LOVE my morning cup of coffee!

Double Shot Oatmeal is a hazelnut coffee-infused oatmeal.  It’s usually on the slightly bitter side, so today I tried adding a few drops of Stevia to the mix.  Divine! 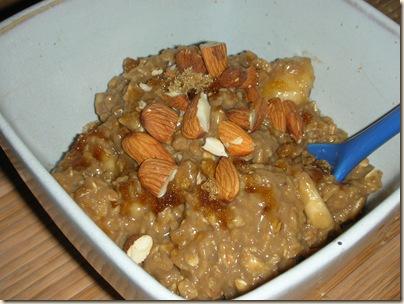 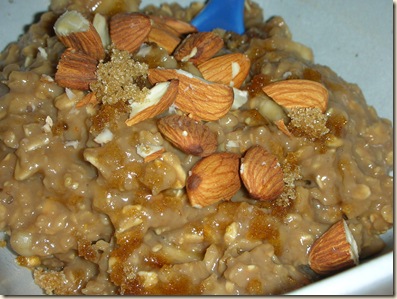 I just love that rich caramel color.  And it smells so delicious!

Last night during our run, Meghann and I were talking about our next big running "goal."  Ever since I started to run, my goal has been to race in a Half Marathon.  My big race is on Saturday, and unless something goes terribly wrong, I plan on finishing! Meghann’s goal is to also do a Half Marathon, and she’s signed up for one in December.  So we were chatting about "what comes next."

After Saturday, I have two new goals.  The first goal is to run the Gasparilla Half Marathon on March 1, 2009 and improve on my Half Marathon Personal Record (PR).

My second is much more long-term.  I would love to run a marathon one day and qualify for the Boston Marathon.  To qualify for Boston (known as "BQ" in runner’s lingo), runners must run an approved marathon and meet the designated time standard which corresponds to their age group.  For a 24-year old female, the BQ is 3 hours, 40 minutes (which roughly translates in 8:30 minute miles… for 26.2 long, long miles).

My BQ time is WAY faster than my current pace.  Boston is a very lofty goal, but if/when I choose to train for a marathon, I will definitely shoot for a BQ and run in a Boston-approved event.

I think it’s important to have a measurable Fitness Goal.  A goal gives you a reason to work out when you don’t really feel like it.  A goal forces you to go outside your comfort zone.  And, of course, there is no better feeling than that of REACHING YOUR GOAL! No one can take away that feeling of pride and happiness.

Here are some examples of Fitness Goals, both big and small: