OK – No run this AM, which likely means no run today at all.  I’m disappointed, but my rule is that sleep always comes first.

Anyways, I’m going to re-arrange my running schedule to incorporate a run tomorrow and a lighter on Friday, so I can do a long run on Saturday without feeling exhausted.

I woke up craving something fun for breakfast, and Rocky Road Oatmeal was born… 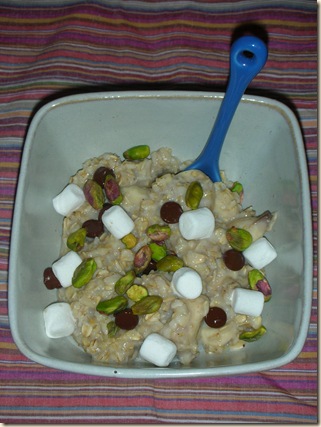 Since I topped my oatmeal with marshmallows and chocolate chips, I skipped my normal sprinkling of brown sugar. 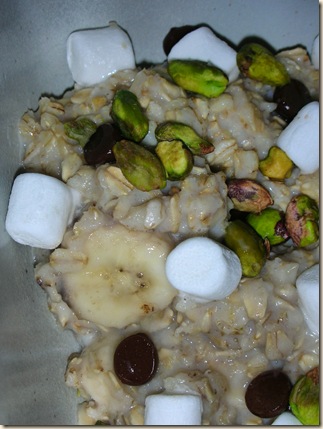 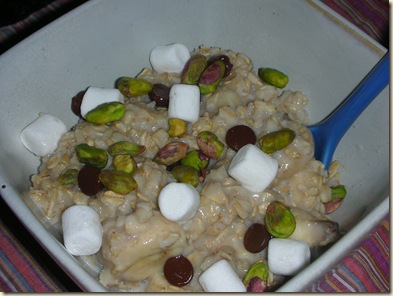 Musings on Bisphenol A and the FDA

As many of you may remember, I was considering giving away personalized sports bottles filled with candy as a wedding favor.  I liked the idea that the favor was "fitness" related and that it would be beneficial to the environment, encouraging guests to drink from a reusable sports bottle instead of constantly buying one-use plastic bottles.

However, I was concerned about giving my guests a bottle made with Bisphenol A, commonly abbreviated as BPA.  Suspected of being hazardous to humans since the 1930s, concerns about the use of Bisphenol A in consumer products recently grabbed headlines when several governments issued reports questioning its safety, and some retailers pulled products made from it off their shelves.

Plastic bottles with a #7 on the bottle usually contain BPA. Bisphenol A has been known to leach from the plastic lining of canned foods and polycarbonate plastics that are cleaned with harsh detergents or used to contain acidic or high-temperature liquids.

In total, more than 100 studies performed by government scientists and university laboratories that have found health concerns associated with Bisphenol A (BPA).  Bisphenol A is an endocrine disruptor: it is an estrogen receptor agonist, and such agonists can act like the body’s own hormones, leading to similar physiological effects on the body. There is thus concern that long-term low dose exposure to Bisphenol A may induce chronic toxicity in humans.  Studies by the CDC found bisphenol A in the urine of 95% of adults sampled in 1988–1994 and in 93% of children and adults tested in 2003–04.

The online store I was considering purchasing sports bottles from only carries polycarbonate plastic bottles.  However, they have a banner ad on the website that screams, "NEWS: Polycarbonate Bottles are SAFE!" and has a link to this Washington Post news story.

As described in the news story, the FDA has released a draft reporting stating BPA does not pose a health hazard when used in food containers.  This report, of course, contradicts the dozens of studies that found the chemical is harmful.

The FDA based their decision on two INDUSTRY-FUNDED STUDIES that found that BPA is not harmful to your health in low doses.  Gee, are you surprised that the FDA found BPA to be safe after only reviewing two studies, funded by the very companies that stand to lose BILLIONS of dollars if the chemical is deemed harmful??

Thanks for watching my back, FDA.

If you’ve ever read "In Defense of Food," you know that it’s unwise to trust our government’s health and nutrition recommendations.  It bases its decisions on lobbyist desires and political influences. Thus, I’ve decided that I cannot purchase a polycarbonate bottle for my guests, and I will continue to avoid water bottles with a  #7 on the bottom.  Here is a description of why you should avoid #7 and other numbers to avoid.