GOOD MORNING, blog land! First of all, I just wanted to say that I really appreciate each and every one of you who takes the time to read this little blog.  I learn so much from you guys, both from your comments and your own blogs (which I always read, even if I don’t comment on everyday)! THANKS for making this such a fun hobby!

Anyways…. enough of the mushy stuff! On to breakfast… 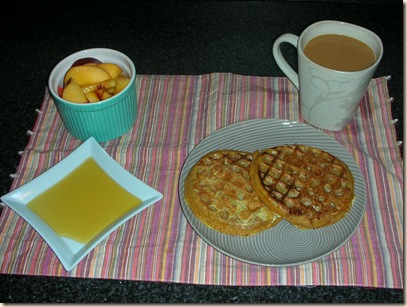 This morning, I wanted something besides oatmeal (gasp!) and came up with this fun hybrid–French Waffles! 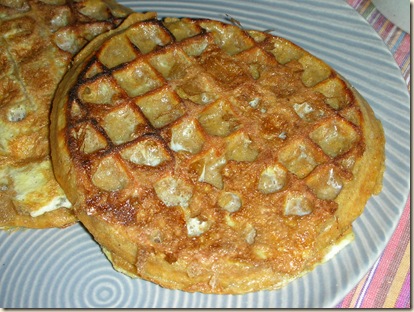 First, I lightly toasted two Kashi Heart to Heart waffles.  Then, I beat an egg, a dash of vanilla, and a sprinkle of cinnamon in a deep bowl.  I dipped each waffle in the egg mix, just like you do for French Toast, and put the waffles on the griddle.  I also poured the leftover egg into the honeycombs before flipping.

The French Waffles were very chewy and had a much more complex taste than regular French Toast.  Yum!

On the side, I had a little bit of real maple syrup.  It’s so much better to dip than to drown your waffles! 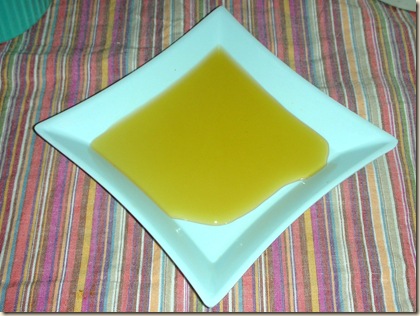 And, I decided to forgo  my typical banana for a nice, juicy peach.  I should enjoy these while I can — it’s OFFICIALLY FALL! 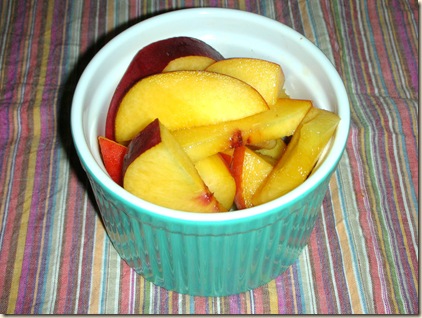 I was a little freaked out last night because I think I have a minor  shin split/overuse injury on my right leg.  Considering that my 15K is on Saturday and my Half Marathon is the weekend after, this is NO GOOD.  The curious thing is that it feels better when I work out/run.  It only irritates me when I walk up and down the stairs. Huh?!

I decided to try a traditional Chinese remedy… Po Sum On Medicated Oil. 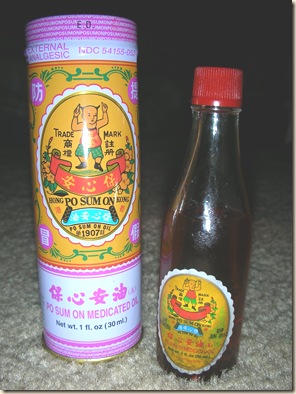 I asked Future Husband what exactly "dragon’s blood" was, and he said it was Komodo Dragon blood.  I totally believed him the entire night!  He must have just been teasing me, because I looked it up online this morning and it is NOT from a giant lizard!

Dragon’s blood "comes from the sangre de drago, a tree found in the Amazon rain forest, which can grow to a height of 90 feet. When the trunk of the tree is cut, it exudes a red, resinous sap, giving dragon’s blood its distinctive name.  According to traditional Chinese medicine principles, dragon’s blood has sweet, salty and neutral properties, and is associated with the Heart and Liver meridians. Dragon’s blood is typically used to treat cuts, scrapes, abrasions, skin ulcers and insect bites. Dragon’s blood can be applied directly to skin, creating a sort of protective "second skin" that allows the underlying skin to regenerate without any additional risk of infection. It stops bleeding and helps the underlying skin to regenerate more rapidly."

Last night, I gave myself a nice leg massage with this oil.  Although I couldn’t tell if the dragon’s blood was doing anything, the menthol and peppermint oil make my calves feel all warm and relaxed.  I woke up this morning feeling much better!

Have a good day!