Today I set a new PDR (Personal Distance Record)! I’ve never ran farther than 15k (9.3 miles) before, but this morning I pounded out 10.0 miles! There’s something special about breaking into double digits!  If you had told me two years ago (when I couldn’t even run 1/4 of a mile without gasping for air) that I could do this today, I never would’ve believed you!

The key to this run was mental preparation and vigilance.  I pumped myself up for it ALL WEEK and even marked it on my calendar.  I woke up PYSCHED to run!

During the run, I focused on my surroundings and listen to some great dance tracks.  But, around mile 7.0, I realized I was started to think negatively–"I’m tired"…"My legs hurt"…"I just want to stop!"  I IMMEDIATELY nipped this negative thinking in the bud.  I consciously acknowledged that I was being a downer and forced myself to think positively–"I’m keeping a great pace!" or "I’m feeling strong!"

Also, I only walked 10 times for 15-30 seconds each.  Most of walking happened in the first 5.0 miles.  Especially towards the end, I started to get BRICKS in my legs and realized that it actually hurt more to walk than it did to jog slowly. 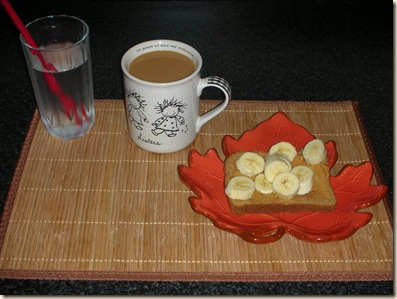 My pre-run snack presented a conundrum–I wasn’t sure how many calories I needed to consume for such a LONG run, but I only had about 30 minutes to digest everything  and didn’t want to overload my tummy.  I settled on a piece of WW toast, a banana, and PB.  I also had a coffee.

This was about 350 calories and seemed to be an adequate amount of fuel for my run.  I felt slightly "empty" around mile 8.0, which wasn’t too bad.  Does anyone have any advice on pre-run snacks before a long run, calorie-burning run?

By the time I got home, Future Husband was awake and making brunch.  I wanted to clean myself up before eating brunch, so I made myself a Muscle Milk Light + skim milk protein shake and jumped in a nice cold ICE BATH! 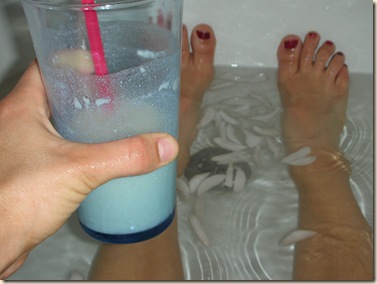 Apparently, ice baths are the cure-all for inflammation in your legs after an intense run.  According to Runner’s World, "immersion [in an ice bath] allows controlled, even constriction around all muscles, effectively closing microscopic damage that cannot be felt and numbing the pain that can. You may step into the tub to relieve sore calves, but your quads, hams, and connective tissues from hips to toes will gain the same benefits, making hydrotherapy an attractive preventive regimen…"

"The second advantage [to ice baths] involves a physiological reaction provoked by the large amount of muscle submerged. Assuming you have overcome the mind’s initial flight response in those first torturous minutes, the body fights back by invoking a "blood rush." This rapid transmission circulation flushes the damage-inflicting waste from your system, while the cold water on the outside preserves contraction. Like an oil change or a fluid dump, the blood rush revitalizes the very areas that demand fresh nutrients."

According to the article, an ice bath should be between 54-60 degrees (wowzer!)  There is no way my ice bath was this cold, but it sure felt great.  Next time, I’ll use a lot more ice.

After my bath, Future Husband made eggs and WW toast.  He cuts out a hole in the center of the bread and then cooks the eggs over-easy in a skillet.  I had cantaloupe on the side; it was delicious! 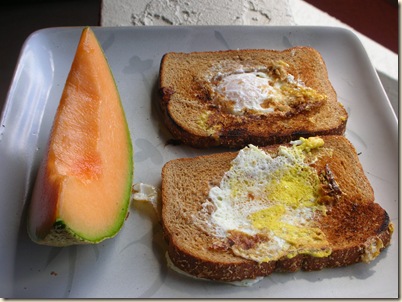 Egg in a hole: 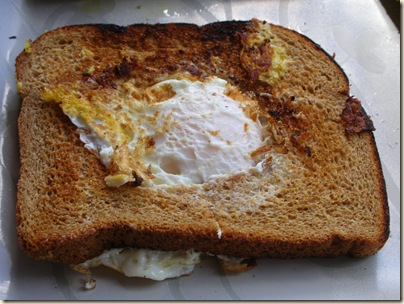 Last night, I broke the No Booze Month sabbatical and had a Blue Moon Harvest Moon Pumpkin Ale.  It tasted like fall and was quite delicious! 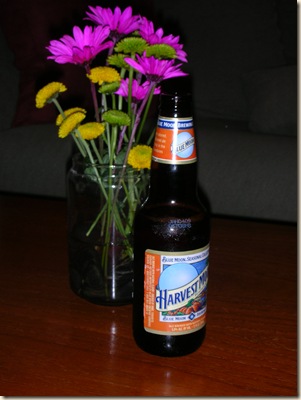 But… now I’m back on the bandwagon.  I just feel better when I don’t drink!  Especially for running, the dehydrating effects of alcohol just kills me.

Today’s plans include:  addressing invites, going to Men’s Warehouse to pick out tuxes, and having dinner with friends.  See you later! Have a nice Saturday.