on August 31, 2008
in All Posts
Last night, I made a list of all the things I wanted to get done today, so when I woke up–the list of doom was staring me in the face: 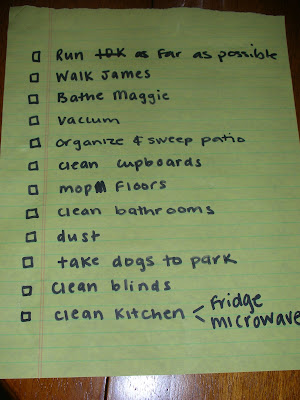 It was probably a mistake to read over the list before my run, because it completely unmotivated me to run a 10k (as originally intended). I changed it to “Run as far as possible,” which seemed more do-able. 🙂 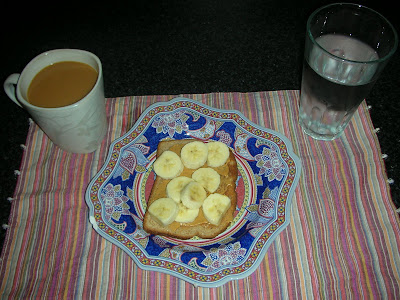 I had a piece of WW toast, 1/2 tablespoon of PB, and 1/2 a banana with a cup of coffee. I ate and then I sat around the house for about a hour. As each minute ticked by, my desire to run decreased a little bit more. My legs are aching from the 7.0 miler I did yesterday morning, I couldn’t stop yawning, and the couch looked soooo comfy.
When I realized that I needed to leave the house NOW or I would never go, I sprung into action. My run, however, was already tainted by my mood. I tried all my old tricks, including:

But nothing worked! My legs felt like lead, and I was literally yawning while running. After 3.75 miles, I gave up and walked home. According to the heart rate monitor, I burned 300 calories, so it wasn’t a total bust. 🙂

I came home and immediately put Maggie in the bath. She’s so easy to bathe because she basically has no hair. 🙂 After my own shower, I made a bowl of oatmeal.
Breakfast 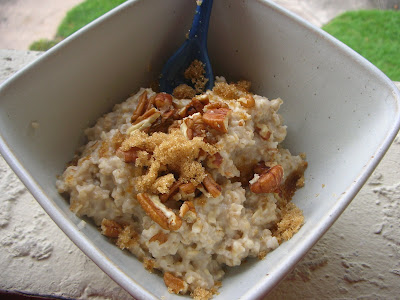 I used 1/2 cup oats, 1/2 a banana, some pecans, and probably way too much brown sugar. It was warm and satisfying. 🙂
On days like today, I give myself “permission” to sit on the couch for an hour or so, and then I’ll try to get some work done. Future Husband is (of course) going to pitch in, too–hopefully it won’t take us too long to get the house in order. It’s really, really messy and hasn’t been deep cleaned since July (eww!).
I hope everyone had a more productive run than I did this AM! What tricks do you use when you aren’t motivated to workout?
{ 1 comment }