on August 26, 2008
in All Posts
I had a dream about cannolis (don’t ask!) and woke up positively CRAVING a cream-filled Italian treat. Since we obviously don’t have a supply of cannoli in the pantry, I decided to whip up a cannoli-inspired bowl of oatmeal. 🙂 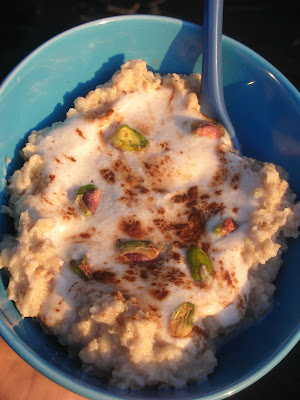 A cannoli is a tube-shaped fried pastry dough shell with a creamy filling, usually containing sweetened ricotta cheese. Cannoli variations include vanilla, chocolate, pistachio… the possibilities are endless! The shell is a basically a mixture of flour, butter, and sugar, and it is super crispy and delicious (and fried).
To turn this fatty dessert into a healthy breakfast, I made a few variations: 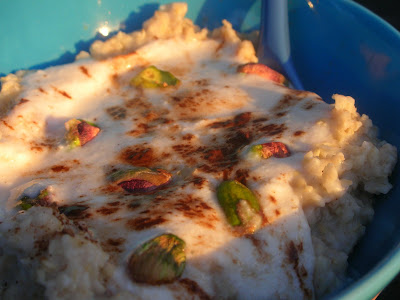 Thanks again to everyone who gave me cake topper suggestions! I’m going to check out all the links you sent me and make a decision!

Some of you asked about my bachelorette party plans… since all my friends live up north, I’m going to fly to Philadelphia, meet up with a group of about 6 girls, and we’re all takng a train to NYC. We’re staying at a sweet hotel that my friend got on a discount (woot woot!) and plan to do loads of sightseeing, drinking, and eating. It will probably be the weekend from hell in terms of healthy eating, but at least I’ll burn a lot of calories shakin‘ dollar bills at half-naked men (just kidding… kind of)!

Musings on HFCS
Today’s nutritional discussion is about HFCS, my favorite #1 enemy (well, trans fat runs a close second)! High-fructose corn syrup (HFCS) is any of a group of corn syrups which have undergone enzymatic processing in order to increase their fructose content and are then mixed with pure corn syrup (100% glucose) to reach their final form. American food producers turned to HFCS as a cheaper alternative to sugar in the 1980s, when government taxes made importing sugar outrageously expensive.

HFCS is a sneaky little bugger that worms its way into hundreds of foods you reach for every time you go to the grocery store. It’s in stuff you wouldn’t expect to find it in—like “healthy” whole wheat bread, Special K cereal, Fig Newtons, and Fiber 1 bars. In fact, the average American consumed approximately over 62 pounds of HFCS in 2005.

Why is HFCS so evil? First of all, there’s a lot of evidence that the rise in HFCS is related to the increase in obesity in America. It’s difficult to tell if this relationship is casual or just coincidental; however, there is no doubt that producing food with HFCS makes it cheaper, thereby encouraging people to eat more crappy food. Secondly, large quantities of fructose (and therefore, HFCS) stimulates the liver to produce triglycerides, promotes glycation of proteins, and induces insulin resistance. Researchers at the University of Michigan found that men who consume very high levels of fructose elevated their triglyceride level by 32 percent. As trygliceride enters our blood stream, it makes our cells resistant to insulin, making our body’s fat burning and storage system even more sluggish… not good! Also, some studies have raised concerns of possible liver damage as a result of HFCS in combination with a high fat diet and a sedentary lifestyle.

You all know how I feel about eating “fake” food—and HFCS is about as fake as you can get! I try to avoid it whenever possible, and since it’s in so many processed foods, it’s important to check the ingredients list. Many foods claim to be “healthy” on the front of the box and actually contain HFCS or a host of other evils, like MSG or trans fat. Which, of course, are topics for next time!