All week, I’ll be blogging about my new favorite book, 168 Hours: You Have More Time Than You Think.  It’s essentially a time management guide that challenged the way I think about my time and has helped me find a few ‘extra’ hours a week. 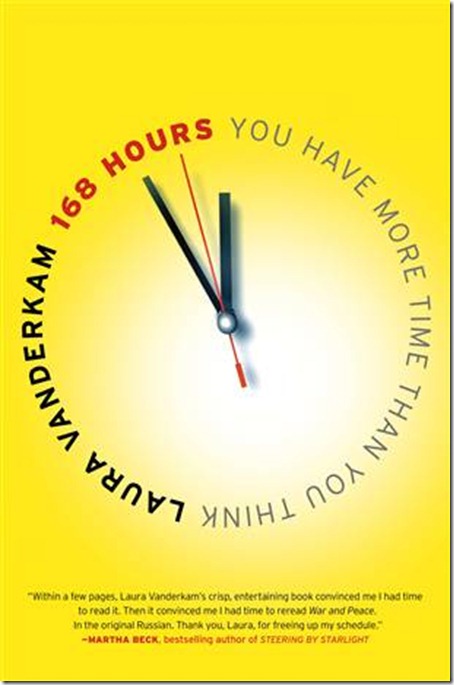 The basic premises of the book is this:  when you hear of a successful small businesswoman who is raising two children and training for a half Ironman, it’s tempting to think that she has some magical potion that gives her two extra hours a ay.   But the reality is that we all have the same amount of time – 24 hours a day, 7 days in a week, or 168 hours a week – and some of us are just more purposeful with our actions and habits.  That doesn’t mean that high achievers never relax.  It just means that they are efficient and effective with the time they do spend on their goals.

My goal for my 168 Hours experience is to ‘find’ a few extra hours a week to spend more time on two things that are very important to me:

The first exercise in 168 Hours requires that the reader track her hours for an entire week to figure out how, exactly, the 168 hours is spent.   This is the first step to finding more time.  Vanderkam argues that Americans, in general, overestimate how much time they spend at work.  There are several reasons why.  First, most of us don’t like working and thus perceive it as a bigger time suck than it actually is.  Second, there is a great deal of pressure in our society to appear ‘overworked.’  Basically, we make ourselves look and feel busy because Americans have bought into the myth that we all work soooo hard and have no time for our personal lives.  Vanderkam states that sociological studies find that most people who claim to work 40 hours a week actually work closer to 36, people who claim to work 60 – 69 hours a week really log 52.6, and those who claim 70 – 90 hours log less than 60.  And lastly, many of our work habits are incredibly inefficient – such as forcing employees to attend pointless meetings or write repetitive memos.

I tracked my time from October 20 – 27 in 15 minute increments.  Yes, this was incredibly tedious, but it was very illuminating and, ultimately, I believe worth the effort.  You can download time tracker sheets on Vanderkam’s website, but I just created a chart in Excel and filled it out throughout the day.

So, that being said, here are some introductory notes about my 168 Hours:

That being said, here’s a breakdown of my 168 Hours: 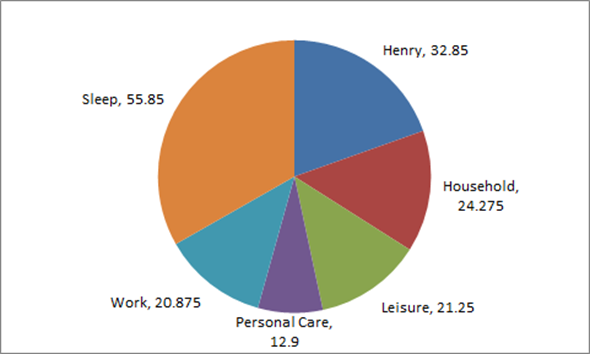 Was I surprised at the results?  Well, I wasn’t surprised at my Henry-to-work breakdown.  As suspected, I am a ‘full-time’ mom, clocking in 32.85 hours focusing solely on Henry.  More Henry time can also be found in my ‘Household’  and ‘Leisure’ time – for example, vacuuming the house while singing to my baby.  After all, Henry is awake 12 hours a day, and unless I’m exercising or working, I’m with Henry.

In terms of work, I do think this was a slightly-lower-than-average working week, but considering that I think of myself as a part-time worker, 20.875 hours is spot on.  I also spent more time engaging in leisure than I thought I would (although, of course, I threw a Halloween bash on Saturday – the prep for the party sucked up at least five hours). 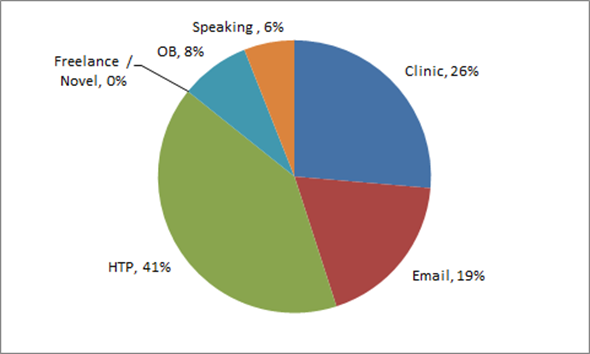 I didn’t have any freelance projects last week, which is slightly unusual, but I am so disappointed that an entire week went by and I didn’t write a single word of my novel.  I am not the least bit surprised that I spend so much time on e-mail.  And if I had a speaking event this week (I do one every five weeks or so), I would’ve spent 10-15 hours on the event, especially when you consider travel time.

It’s worth noting that Vanderkam warns against thinking, “Well, this wasn’t a typical week” because – for most of us – there is always something ‘untypical’ about our week every week, whether it’s taking a half day away from the office, throwing a party, or going to a doctor’s appointment.  This is especially true for someone like me; much of  my work is project-based so my weekly breakdowns can look very different depending on what I’m working on.

And here’s how my time with Henry broke down: 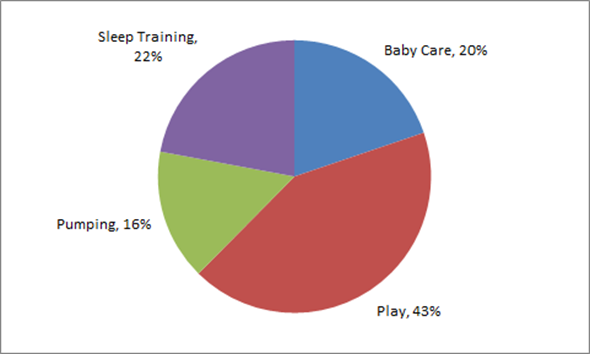 Why I Pump… I wonder what my time breakdown would look like if I still breastfed or formula-fed.  As a side note about pumping, based on what others have told me, I pump incredibly fast.  So please – if you are thinking about pumping exclusively, don’t assume it will also take you less than 1 hour a day combined – most women pump for 20 minutes at a time (and then six or eight time a day!).

I’m happy that I spent so much time playing with Henry, and I’m surprised that sleep training (shushing, soothing, putting down for naps) takes just as much time as general baby care (dressing, bathing, feeding).  I’m also happy to have spousal and familial support in raising my child, as it allows me to do other stuff that I want/need to, like working and exercising.

Here’s what else I learned by logging my time:

And here’s what I’m going to change going forward:

How do you spend your 168 Hours?  Do you multi-task a lot, too?  Do you watch 33 hours of TV?  Got any great time management tips?