I have so many kid-related updates to share, so I thought I’d dedicate an entire post to it.  Let’s start off with the big boy, okay? 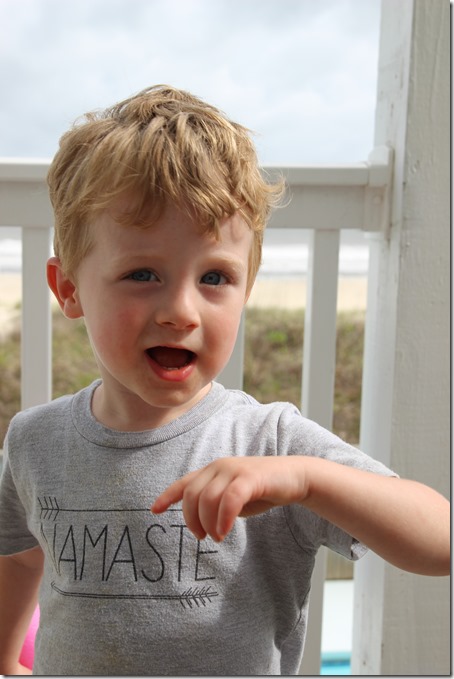 SO proud of Henry.  He’s potty trained (he’ll be three in a month)!  Wahoo. I was really intimidated to potty train, but it ended up not being that big of a deal.  I do think he needed a “push” (he was NOT going to ask for underwear on his own anytime soon), but he was definitely physically and emotionally ready. Once I took the lead, there wasn’t a fight over it.

I didn’t use any particular method; I just switched out his diaper drawer for an undies drawer and told him no more diapers.  I bribed him with chocolate to sit on the potty every hour or two. The chocolate worked really well at first, but I phased it out by the third day.  We’ve gone four days with NO accidents.  And he’s done stuff like wake up and run to the potty (even though he’s got a nighttime diaper on) and stop playing to go pee without being prompted.  Amazing! 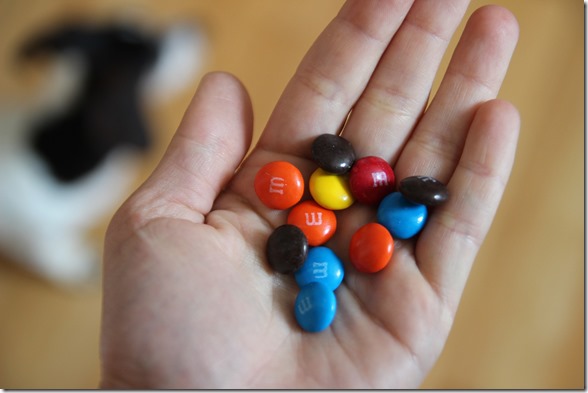 We’ve still got to work on going potty at school. There’s only three days left of school, so I’m not going to push it. And, of course, we have to work on nighttime, but that’s down the road.

#1 – Put a potty in your car.  This works really well if you have an SUV but you could make it work with a regular car, too.  Public restrooms are pretty intimidating, and a potty in the car works really well in a pinch. I just pour the pee into a bush and rinse the potty out when we get home (haven’t dealt with #2 in the car potty yet, so no idea how to handle that).

#2 – If your kid is into the idea of racing, have pee races. “I’m going to pee first!” seriously gets Henry RUSHING to the bathroom.  I usually let him win the pee race… Hah.  In all seriousness, pee races worked way better than chocolate bribes.

#3 – This is obvious but always have a change of clothes, a plastic bag, and a TON of wipes.  The public pee accidents are no big deal, but the public poop accidents… Ugh.  Big deal.  You will definitely need that plastic bag!  I keep the clothes/bag/wipes combo in my purse AND another set in the car, just in case. 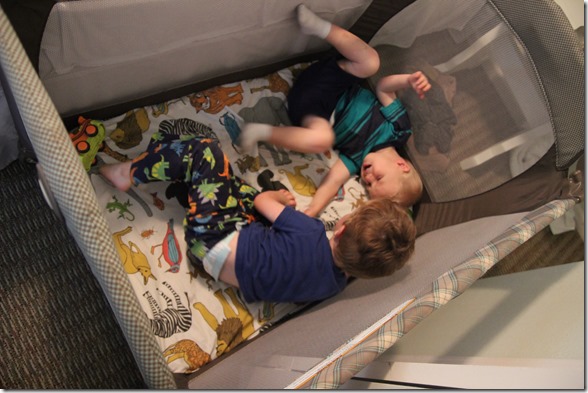 (On our beach trip a few weeks ago with friends – he still sleeps in a pack and play on trips!  And takes up the whole thing! Hah.)

Henry’s sleep has been kind of off ever since Claire was born. The best thing I did was stop forcing naps.  I hated the idea of giving up his nap because I usually work or relax in that window, but nighttime was a lot easier when he wasn’t napping.  He goes down really easily at 7 PM as long as he hasn’t napped – if he has, it’s a 9 PM battle.

We also have been dealing with early wake-ups – he was hearing Claire cry around 5:30 and getting up.  Way too early for us; way too early for him. I invested in the Okay to Wake Clock, which is a simple alarm clock that glows green when it’s okay to get out of bed and get Mom and Dad. So far, it’s working… We’re trying hard to drive it home because I feel like the clock could lose it’s novelty/power over time.  So far, so good. 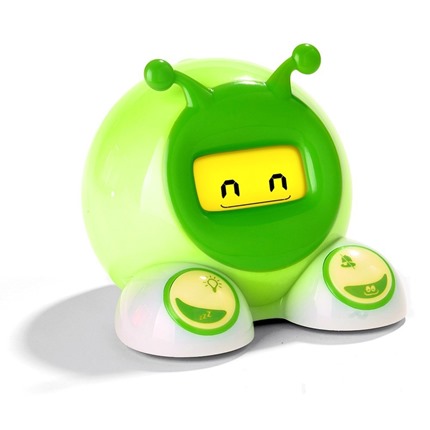 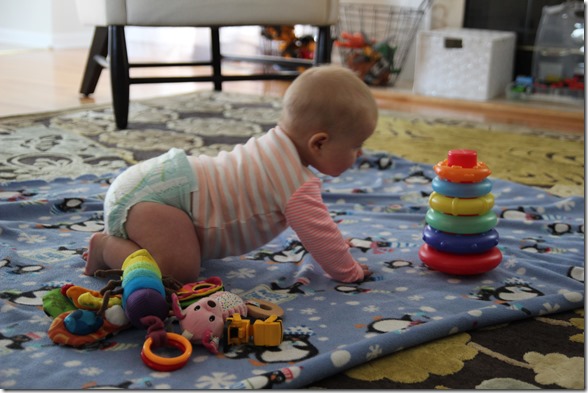 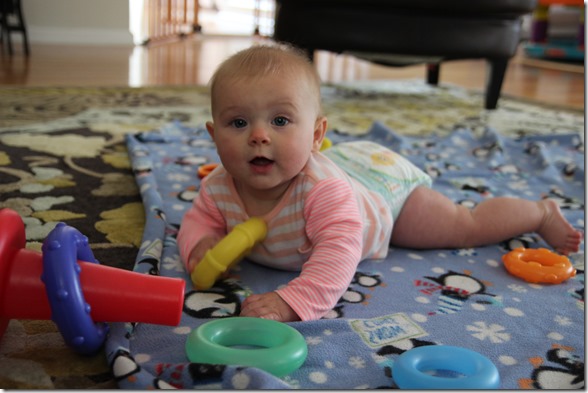 Claire is 6 months on June 2. This is such a fun age with so many cool developments. No babbling yet, but I did hear one single “Ma!” the other night. She is, however, crawling/rolling/dragging herself places. She can get anywhere she wants – it just might take a while!  She can also sit up unassisted!  I LOVE it when babies can sit up (they seem so much happier). I still have to spot her, of course, but she can sit up for a long time now.

Claire is eating solids!  Super exciting.  I love this phase of babyhood, too.  It’s incredible to watch them discover eating.  We’re going a combo of Baby Led Weaning (more solid-solids that the baby feeds herself) and regular purees, which is what I did with Henry. So far, she’s had sweet potato, banana, and asparagus. 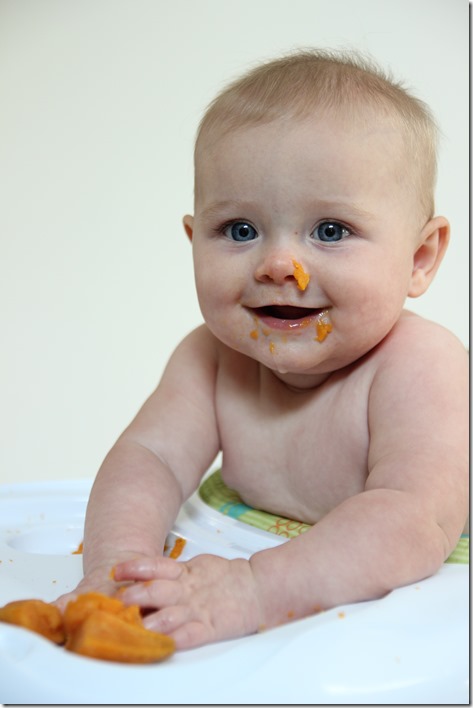 Maggie is thrilled about this new development! 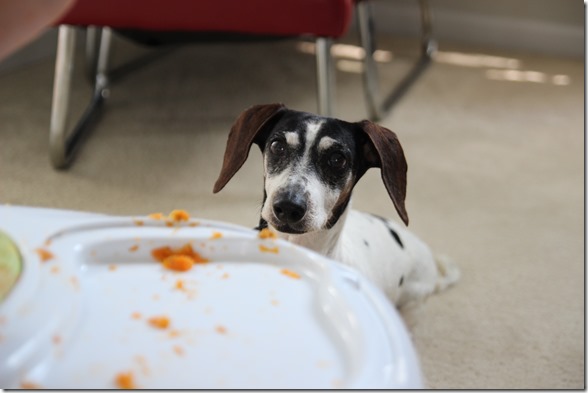 I need a new high chair – any recommendations?  I want something SUPER easy to clean.

And last, but not least, baby sleep.  Oh, baby sleep.  I can’t help but talk about Claire’s sleep in comparison to Henry.  Overall, Claire has been a better sleeper.  She did longer stretches earlier, which was great because I never reached the same level of desperation from soul-crushing exhaustion as I did with Henry.  But Henry was much more consistent – he was up 2 – 4 times a night from birth to 5 months, which is when I sleep trained him with a CIO (Cry It Out) method. Claire has been all over the place – she was doing 1 wakeup at 3 months (glorious) and 3 at 5 months (painful, especially when combined with toddler wakeups).  Plus, with the second kiddo, it’s not like you can just nap whenever they nap.  So yeah – I have felt pretty shitty since her birth.  When she hit the 5 month mark and I felt like she was ready to be trained, I wanted to throw pillow-shaped confetti into the air.

I used the same sleep training method for Claire as I did with Henry <—explanation.  It was painful for us both, but I know from experience that it works really fast.  We had two nights of crying and, on the third night, she slept through the night.  FREAKING AMAZING.  I have not slept longer than 5 hours since December 1, so yeah…  Clearly I’m stoked.  Henry took more like 4 or 5 nights with a lot more crying, so I’m glad it was faster with Claire.

I know sleep training is not everyone’s cup of tea, but it definitely has worked well with our family, and I’m excited to begin feeling like a normal human being again in the future.  Can’t wait to stock up on all those ZZZs!

What’s going on with your kids?