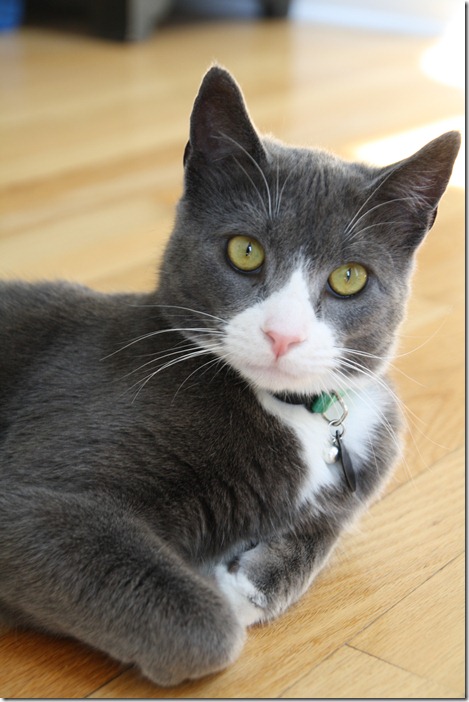 Alex Ferguson is getting along quite well.  He is a really fun, friendly, and quirky cat, and he fits in with the dogs and Henry nicely.  I thought I should do an update on Fergie since so many of you have asked about  his adjustment! 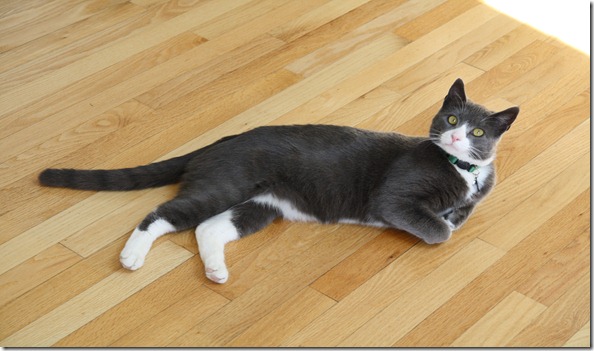 He eats SO SO SO much.  I cannot put it into words.  I feel like I’m constantly refilling his bowl (like, several times a day).  He’s scarfing down tons of food every day, and then he tries to take more food off our plates if we walk away from the table.  He’s been de-wormed and all that, so I don’t think it’s anything health-related.  He just has a voracious teenage boy-cat appetite!  He was a little thin when we adopted him, so I’m happy to see him pack on a few pounds.

When we first brought him home, we put his litter box in our master bathroom so he’d have space to roam but we could separate him from the dogs until everyone adjusted.  Since we moved our bedroom stuff upstairs, I just never bothered to transfer his litter box into the laundry room (which is where Pippa’s box was), and now, he’s kind of taken over the master suite.  We put him into the master bedroom at night so he doesn’t meow at our upstairs bedroom door.   So essentially, he has his own bathroom, bed, and closet – we joke that it’s Ferguson’s “apartment.”

He’s begun to play with Henry’s toys.  This is kind of bittersweet for us because Pippa used to keep us up night by batting around Henry’s balls.  Ferguson prefers to push around Henry’s Matchbox cars – it’s epic!

He loves to cuddle and has a very loud purr.  Henry has learned the word “purr” thanks to Burguson – I mean, Ferguson. He lets Henry pet him, but Henry gets a little excited and loud.  It works better if Henry sits in my lap and then we pull Ferguson into our joint lap.  Ferguson loves it! 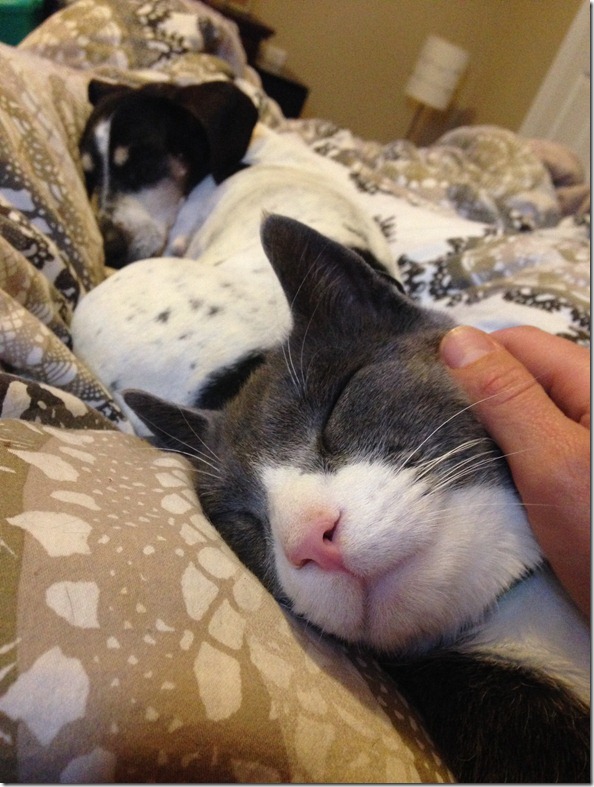 Remember how everyone was having a terrible allergic reaction when we brought Ferguson home? Well, I think the reaction was more to the rescue facility than to Ferguson himself.  After several baths and a few very thorough brushings with the Furminator… no more sneezing!  Thank Goodness.  We were very worried for a while. 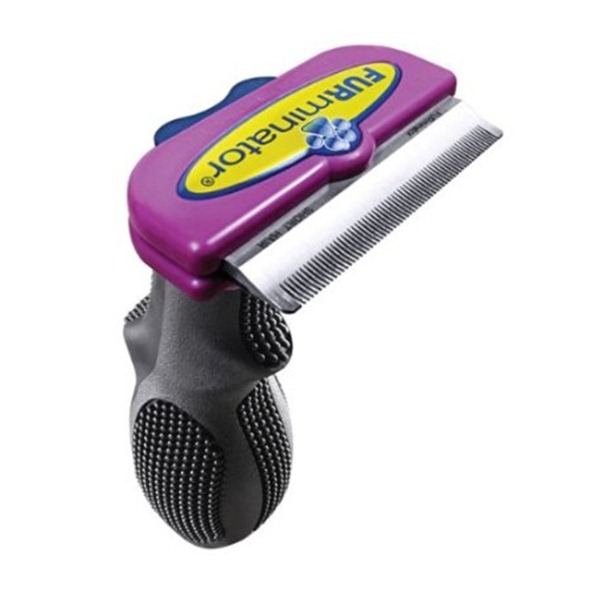 The Furminator is pretty amazing – it gently strips away all loose fur and dander.  You just have to brush them outside or it’s a nightmare to clean up!   I want to get the doggie version for James.

So, all in all, we’re thrilled to have Ferguson.  I never knew how much of a cat person I was until we adopted Pippa, and it’s nice to have that kitty hole in our hearts filled with Ferguson’s sweet little face.  <3  <3  And it’s wonderful to find another cat that meshes well with dogs and a toddler (a steep order, for sure).  Pet adoption for the win!

Just a reminder:  If you participated in Ironman March AND finished the challenge in March and you want to be eligible for one of the prizes, email me a photo of your completed training plan –> caitlinjboyle@gmail.com.