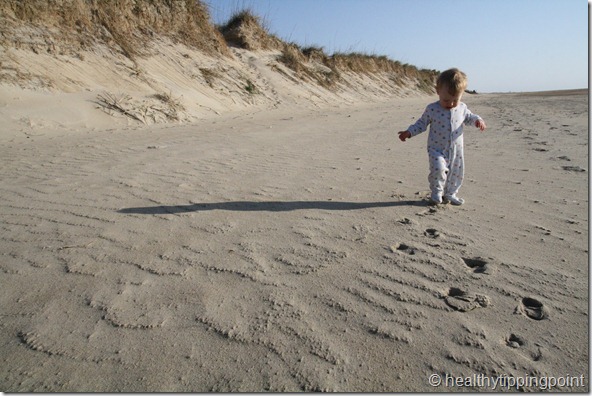 Last week, our adventures took us from the Outer Banks (we stayed in Avon, for those who asked) to Raleigh, North Carolina for the second event in the 2013 Ramblin’ Rose event series.  Ramblin’ Rose is an introductory, all-women’s triathlon series that mostly takes place in North Carolina (we have events coming up in Chapel Hill, Winston Salem, Charlotte, and Rock Hill).  I do most of their social media per my new job. 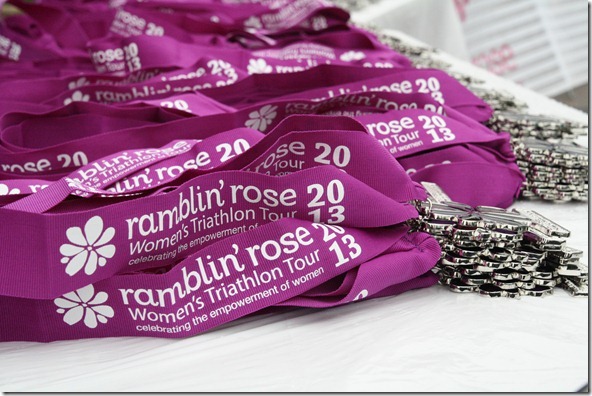 The night before the race, we checked into a hotel.  We promptly played Five Little Monkeys, Jumping On The Bed…  No one jumped off and bumped their head, though. 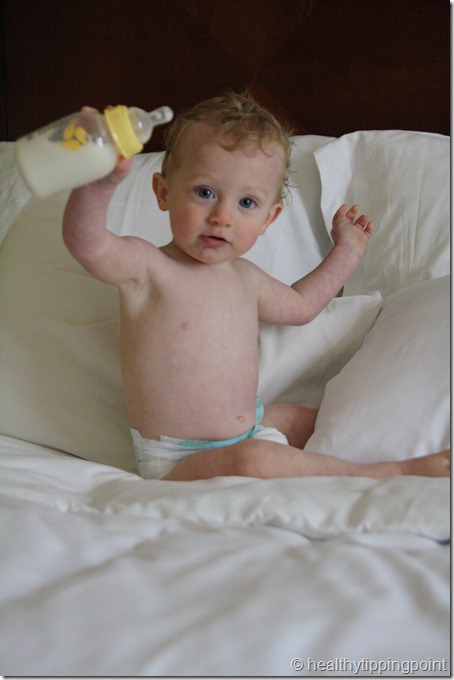 We took a dip in the hotel pool, showered, and got dressed for a semi-fancy dinner out.  We headed to Fiction Kitchen, a vegetarian restaurant in downtown Raleigh with loads of vegan and gluten-free options. 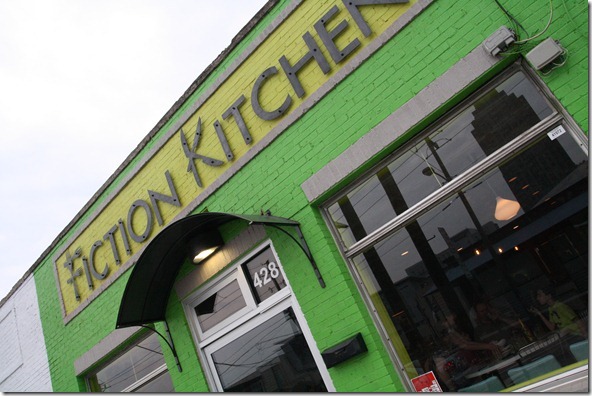 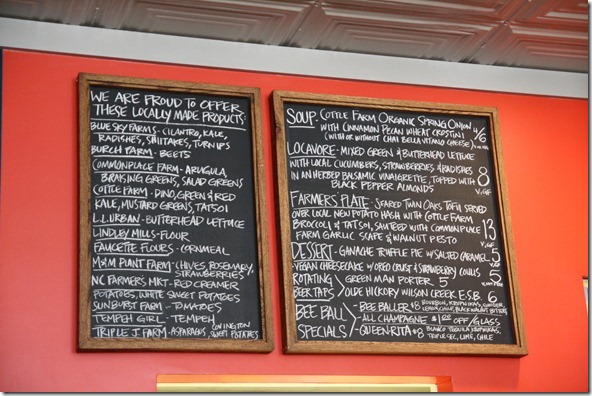 Their menu is TO DIE FOR. 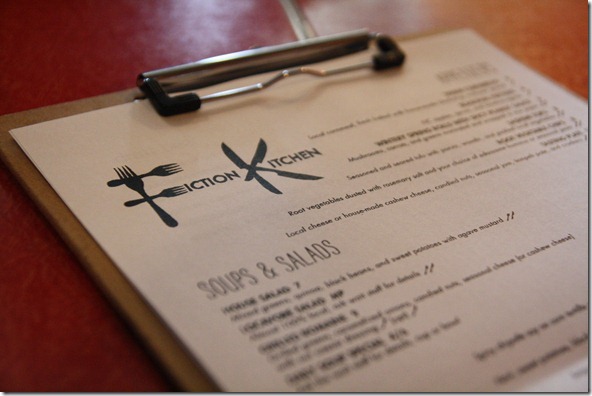 We started off with the Wintery Spring Rolls with Peanut Dipping Sauce. 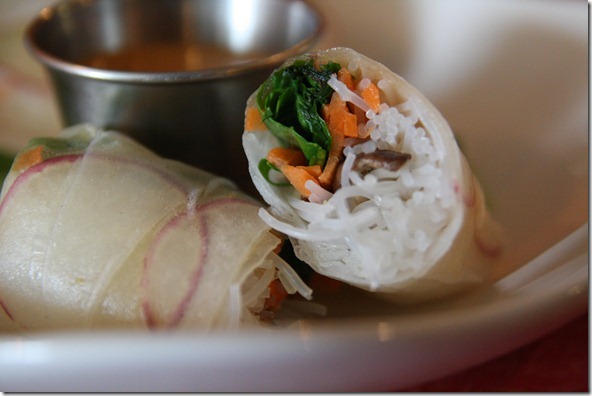 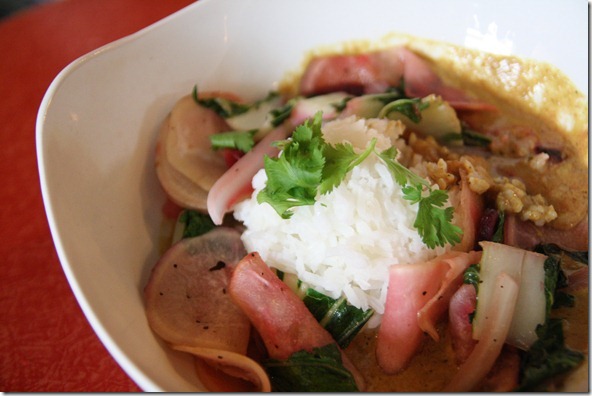 And the Braised Tempeh with Pesto Grits (balsamic and tamari braised tempeh with seasonal vegetables, served on top of pesto grits). 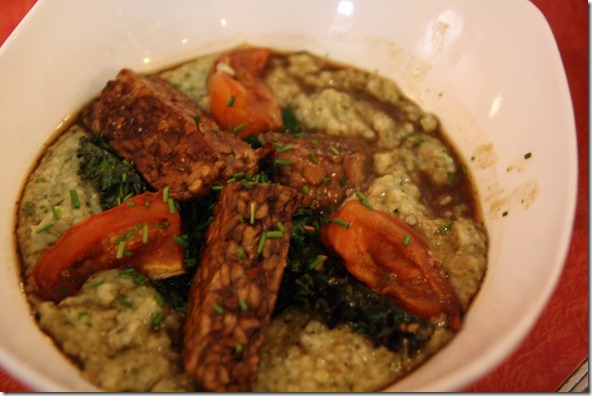 That picture truly doesn’t do the Pesto Grits justice because it was one of the BEST things that I have ever tasted… ever.  Truly – so good.

Henry had the smashed potato. 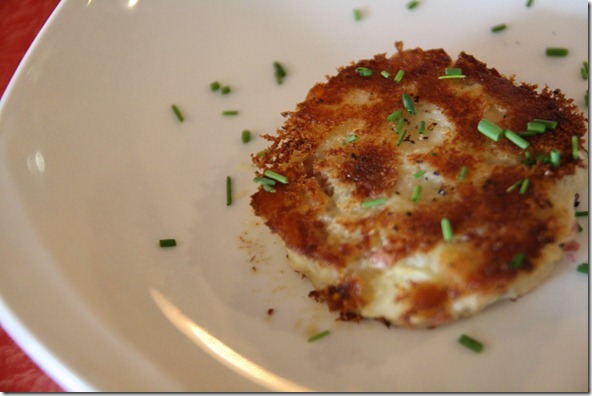 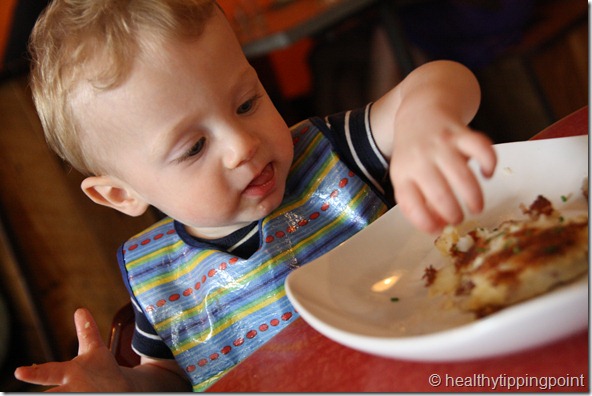 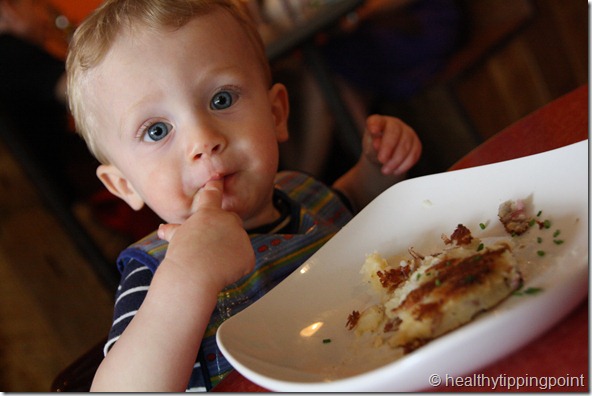 Which he gave two big baby thumbs up.  He loved it SO much that I got a second potato pancake to go so he could have it for breakfast the next day.  It’s fun that he can eat things off menus now – makes dining out so much easier!

Henry was reaching his bedtime, so we got dessert to go – two vegan and GF chocolate cakes that came with a side of salted caramel dipping sauce.  As delicious as you think! 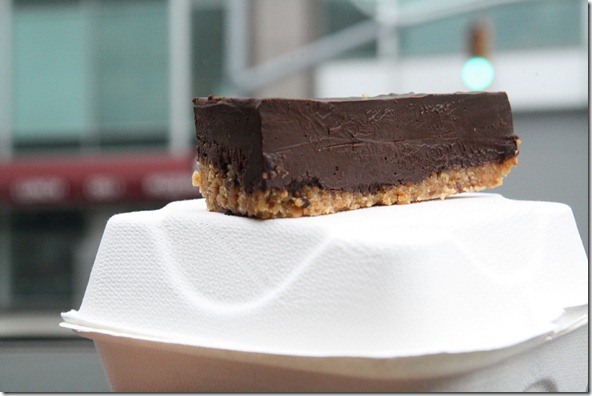 All in all – the next time I am in Raleigh, I WILL be back to Fiction Kitchen. Truly great and creative food, reasonable prices, and a really cool retro vibe.

The next morning, it was time to Ramblin! 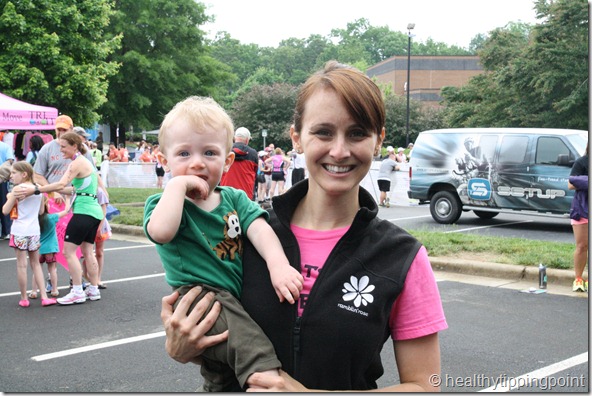 It was fun that the Hus and Henry could come with me because they probably won’t go to any of the other events.  Logistics with Henry can be hard for morning events because of nap time (Hi, I’m a parent and my kid’s sleep schedule clearly rules my entire existence!).  But he held tough for the event!   I think he just really likes triathlons. 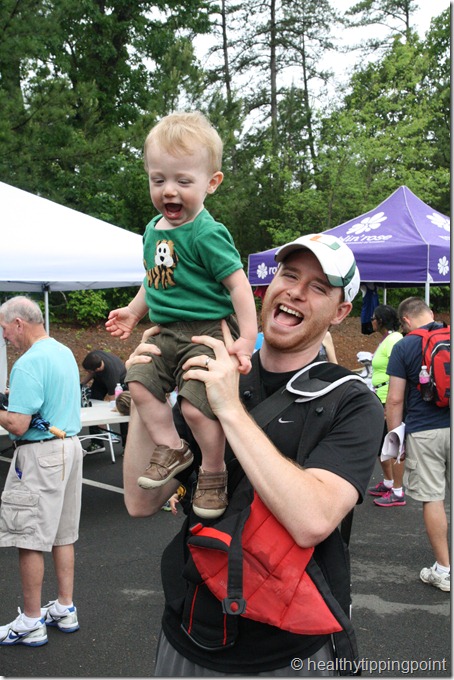 Like all Ramblin’ Rose events, Sunday’s sprint triathlon featured a short indoor pool swim (250 yards), a fast bike (9 miles), and a 2 mile run.  I wish I could take all of you to a Ramblin’ Rose event so you could see how exciting and supportive it is!  There are women of every age (from 10 years old to 72 years old!), shapes and sizes, and athletic ability.  I love that there are so many moms and daughters participating, and it’s cool to see so many husbands, grandparents, friends, etc. supporting the triathletes.  Triathlons can get pretty serious – it’s nice to see how Ramblin’ Rose adds a really personal touch to the event. 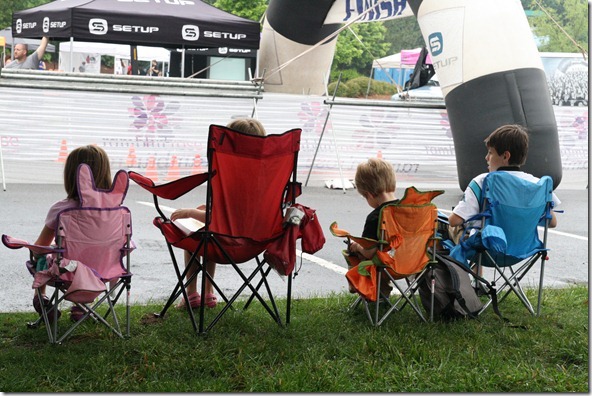 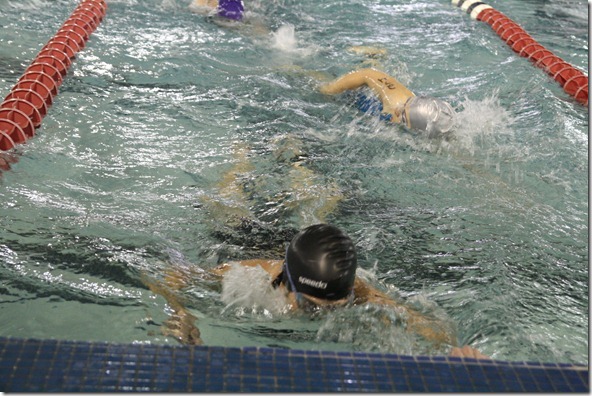 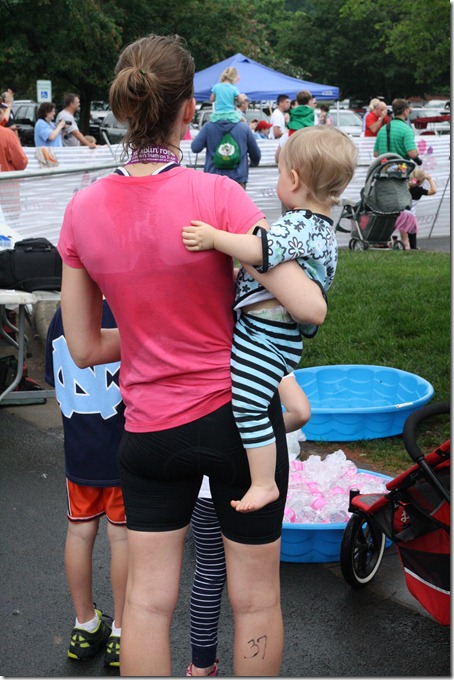 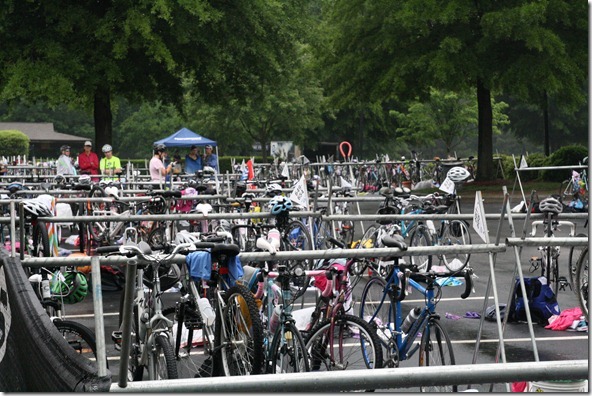 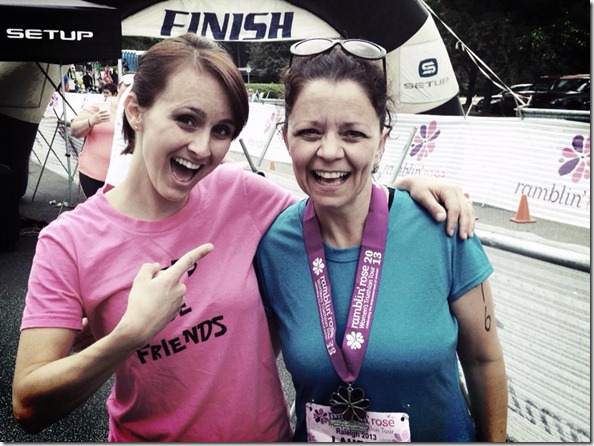 Lauren from Real Mom on the Run (one of our blog ambassadors – a momma to four teenagers who transformed her life through healthy living {and lost 60+ pounds to boot}) and me at the finish line. 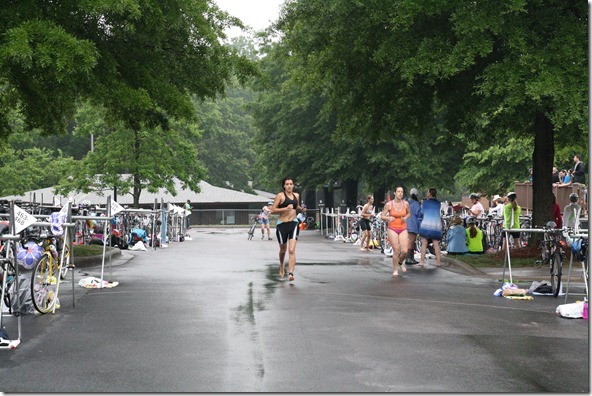 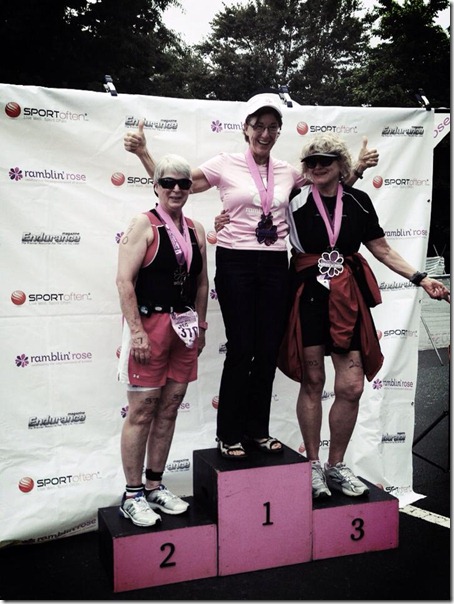 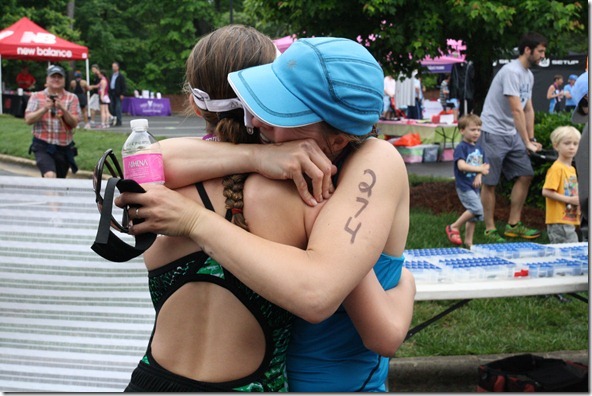 I always do a special Facebook post about our first finisher and our final finisher because I truly believe that EVERYONE should be celebrated as they cross the finish line.  I’ve been at the front of the pack and the back, and honestly – I was so thrilled with myself both times that I didn’t care what my ranking was (I need to remember those moments when I start getting antsy about my comparative performance this season!).  As the crowd waited for our final finisher, another spectator told me that Karen was determined to finish the event, despite getting over a pretty serious cold.  In fact, Karen’s husband was so nervous/excited for her that he volunteered to provide support on the bike leg so he wasn’t just anxiously milling around the entire time!

Karen completed the 2 miles with a group of supporters who cheered her on every step of the way… until the finish line, of course, when they let her cross solo (with flowers in her arms!).  I watched as dozens upon dozens of spectators burst into tears when our final finisher Karen crossed the finish line. 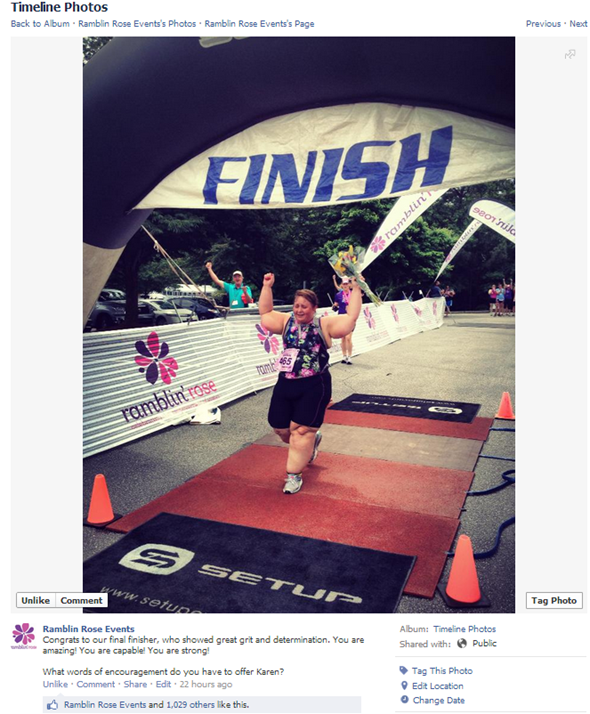 I guess other people were inspired, too, because it was our most-shared pictures of the season by miles.  Go Karen!

How was your weekend?  Do anything exciting?  New restaurants?  Awesome races?