What Henry Is Reading Now

I love to read (you can search my Book Club! category for lots of book reviews) and hope to pass my passion for the written word down to Henry.  When I was pregnant, I had many daydreams about snuggling up with my baby to read him book after book after book.  In reality, it’s almost impossible to get Henry to sit still long enough to make it through a book, even one designed for babies.  At eight months, he’s just now getting interested in looking at books.

Some secrets to baby reading:  I’ve got to animate my voice BIG TIME.  Funny noises, lots of inflections.  I do hand motions and wiggle around a lot, too (like, if there’s a train in the story, I’ll stop to making choo-choo noises and chug us around like we’re on the train).  Also, I’ve learned that it’s more than okay to stop halfway through the book if Henry is getting distracted.  I used to try to barrel through to the end (“Don’t you want to know what happens?!”) but quickly realized that it doesn’t matter.  And last, but not least, I time our readings very carefully.  Books work best right after waking up or before going down for a nap.  Middle of the day? Forget it.

I can’t imagine that I’m the only one with a super squirmy baby who finds longer books bo-ring, so I thought I’d share the few that work for us. 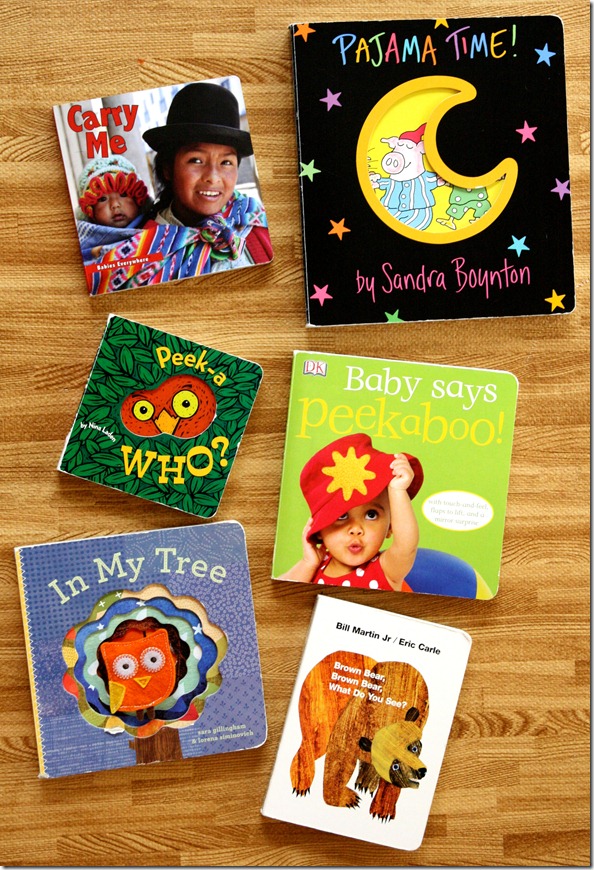 Carry Me: Babies Everywhere:  Henry really likes books with photographs of real people inside, and this one is extra special because of all the babies.

Pajama Time: This is the longest book Henry will sit through, and he only does because the book is more of a song than a story.  The pages are really bright and cheerful, too.  I’ve noticed the highest contrast books grab his focus.

Peek-a-Who?:  This is Henry’s absolute favorite book (you can see in the picture above how worn away it is from chewing).  We read it at least twice a day, and I know the entire thing by heart (not hard because there are only five lines).  There’s a mirror in the back for Henry to look at, too.

Baby Says Peekaboo!:  This book is a winner because 1) pictures of babies; 2) pop-up flaps; and 3) the word peek-a-boo.  The other day, we were reading this book and Henry pointed to one of the babies and said, “BABY!” and I just about died.  He hasn’t done it since though.

In My Tree:  This book has a special hole in the back – you slip your finger inside and the little felt owl turns into a puppet.  Henry loves it!

Brown Bear, Brown Bear, What Do You See?:  This book is too long to hold Henry’s attention all the way through; however, he likes looking at the pictures (very high contrast) and I hope it is helping him learn animal names.