Two Dogs and a Baby 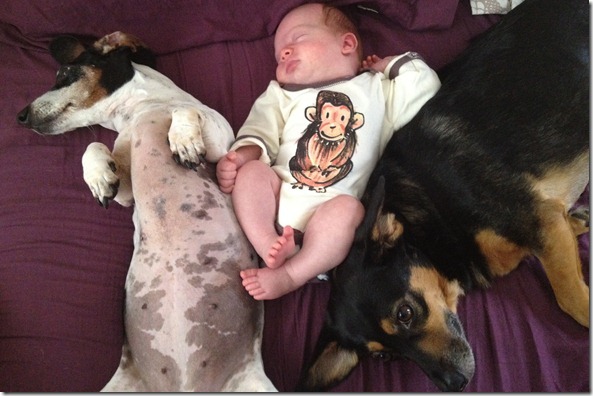 For the time prior to Henry, our dogs were our entire world.  We planned our days around them, took them on our vacations, snuggled in bed with them, and showed off their funny pictures.  As any pet owner can attest, the bond between human and animal is so deep and so real. 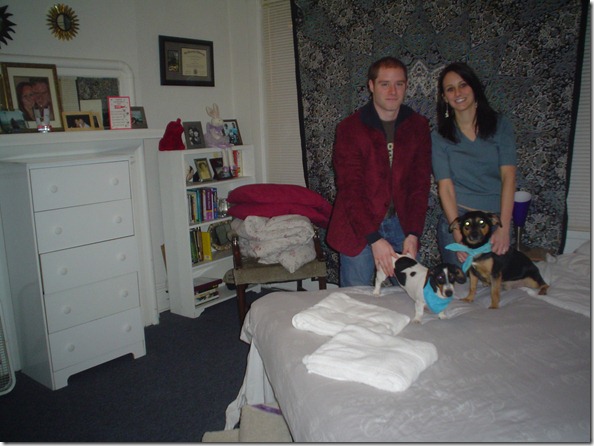 Circa 2006 in our first apartment.  Broke and in love.

I really love M and J with all my heart – I well up just thinking about how they are getting older and will be gone one day.  Quite honestly, before Henry was born, I always thought that I would love my baby just as much as I loved the dogs.  And then… Henry arrived.  I immediately realized how ridiculous it was to think that I loved the dogs like they were humans.  I love them a lot, but not as much as I love Henry. 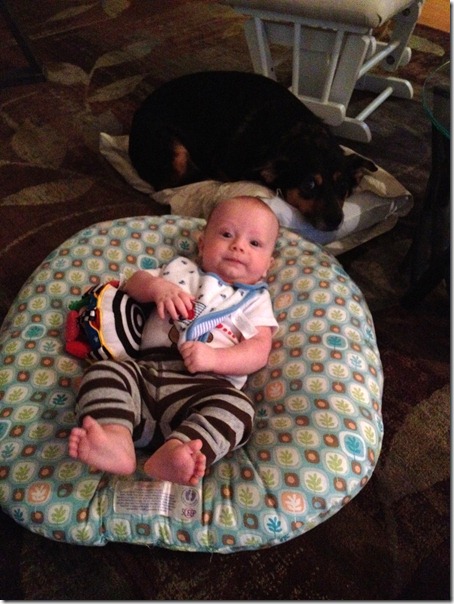 We did a lot of prep work with the dogs to prepare them for Henry’s arrival.  Our biggest goal was to get James out of our bed – he always got up and down and woke up the Husband, which we knew wouldn’t fly when we were already sleep deprived.  We tried kicking him out of our bedroom cold turkey, but readers made me realize how cruel that was, so we used the Cozy Cave method with success.

The other thing we did was get Maggie used to not being in my lap.  Maggie had pretty much spent the entire previous four years in my lap, except for walks and eating.  Obviously, with a baby on the way, I needed to get her feeling emotionally secure enough to be on the floor. 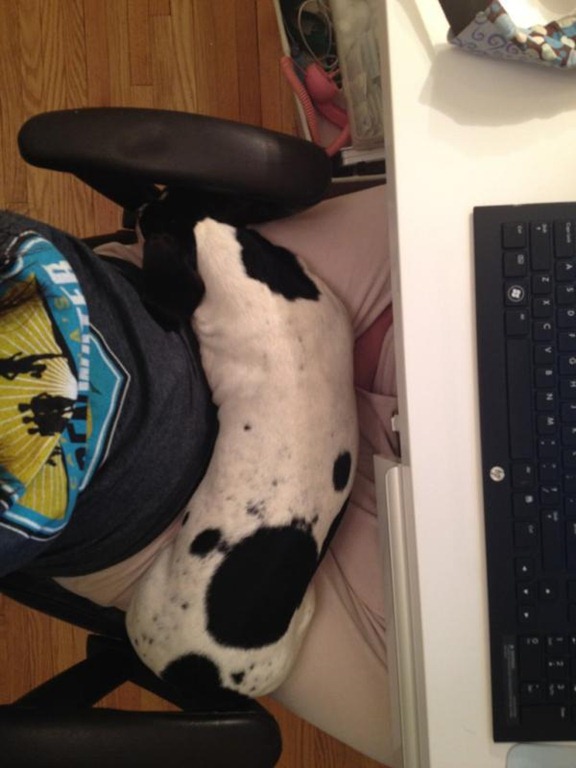 I bought a baby doll from a consignment shop and began to sit with it in my lap.  At first, Maggie didn’t understand why she couldn’t join us, but she figured it out and adjusted. 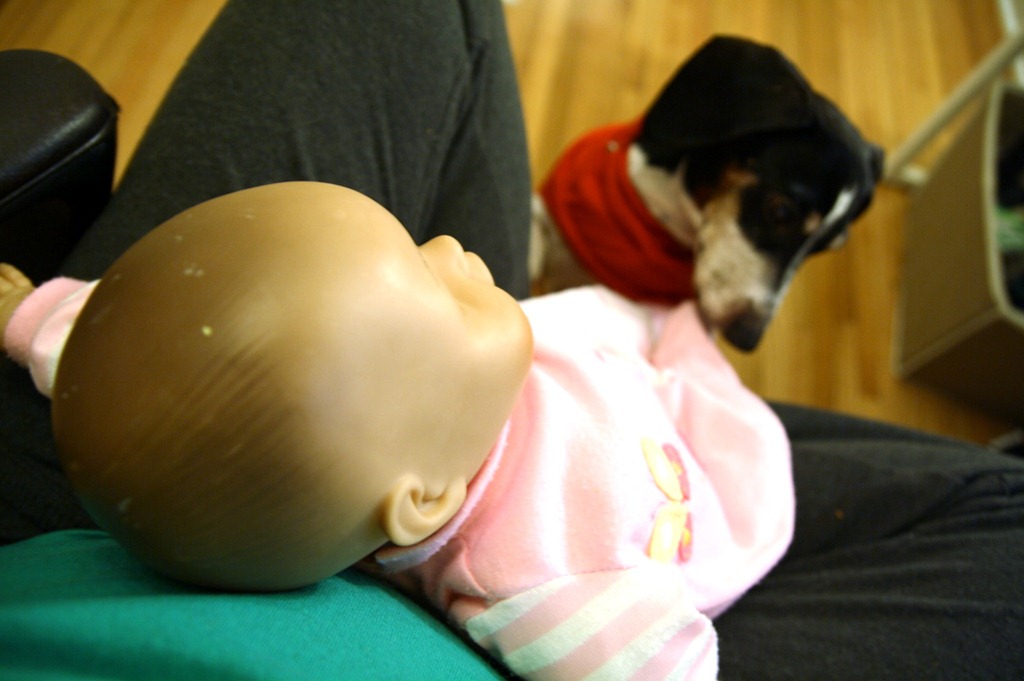 When we brought Henry home, I walked into the house first and greeted the dogs.  I brought a blanket that Henry had been wrapped in and let them sniff it.  Then, the Husband brought in Henry in his car seat and everyone said hello.

The dogs adjusted to their new lives in different ways.  James, who is much more secure and relaxed, rolled with the punches and quickly got used to Henry.  Maggie, on the other hand, had a much more difficult time.  She really seemed to hate me during the first few weeks, especially when I was nursing around-the-clock.  All she knew was that I wasn’t paying as much attention to her.  Thankfully, we didn’t have to deal with any aggression… just moping.  She never seemed to take her hate out on Henry, though – I wasn’t even sure if she ‘saw’ him at all.  As a matter of fact, Maggie continues to behave like Henry doesn’t exist at all.  J is the same way.  They rarely approach him or try to lick him. 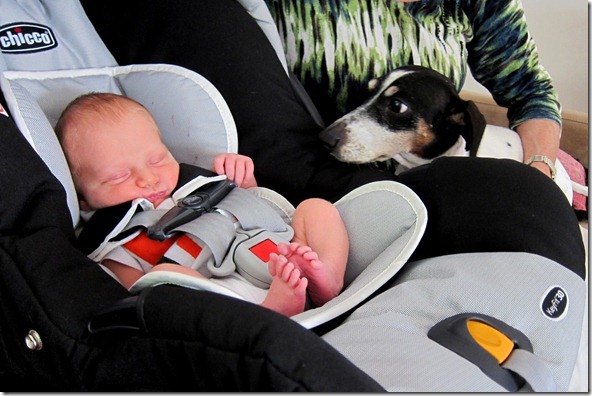 I think all {good} dog owners feel guilty when they bring home their first child.  It’s rough on the dogs, and although you promise that things aren’t going to change for them, life inevitably does.  It doesn’t mean you’re a bad owner – it’s just the way things go.  We made a big effort to hug and kiss the dogs whenever possible and give them extra treats, but still…. The amount of time and energy you have to give to your pets suffers.

The worst thing about having Henry during the peak of summer was that it made it very difficult to walk the dogs.  When I was home alone, I couldn’t take the dogs on long walks because Henry would overheat in his car seat, even if I went really early.  When we were both home, it was easier to take them out.  James was especially used to long walks (a mile or more) everyday; I know this was hard on him.  Now that it is nearing autumn, Henry can safely ride along, even in the middle of the day, and we are back to long strolls.

Side note:  If you know someone who just had a baby and has a dog, the nicest thing you can do for them is come over, say hello to the baby, grab the leash, and walk the dog.  Trust me – they will be SO grateful.

The only other speed bump in adjusting to life with two dogs and a baby has been Maggie’s barking.  Dachshunds are notoriously barky, and Maggie is no exception.  The barking was always annoying, but now that we have Henry, it is SUPER annoying.  He doesn’t seem too bothered by the barking, but it now grates on my nerves like nothing else.  I always joke that Henry listened to the sound for nine months while in my belly, so he probably likes it.  I have tried so many tricks and training methods (save an electric collar) to get her to stop barking, but nothing works. 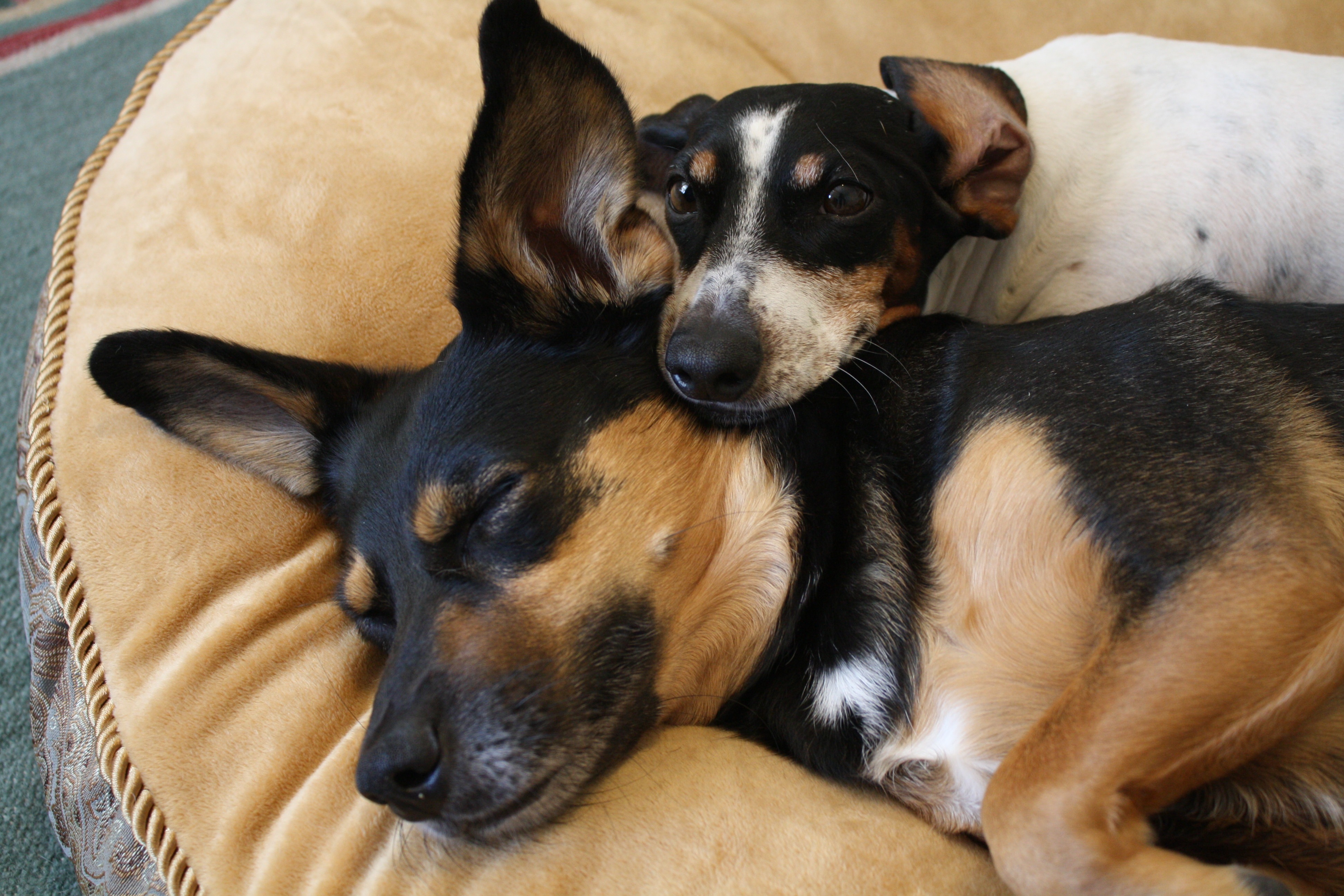 Many readers asked me to write about what life was like for the dogs now that we have a baby – and that pretty much sums it up.  Life is different, and they aren’t the center of attention any more, but we still love them a great deal.  They are adjusting to their new roles.  One nice thing is that I am definitely home more often, so they get crated less, which I know they appreciate.

I’m really looking forward to the day that Henry acknowledges the dogs and wants to pet them.  They really like being petted.  Maybe that’s when M + J will decide they want to hang out with Henry, too!  Until then… we’ll just all keep cuddling on the same couch.  It’s close enough.